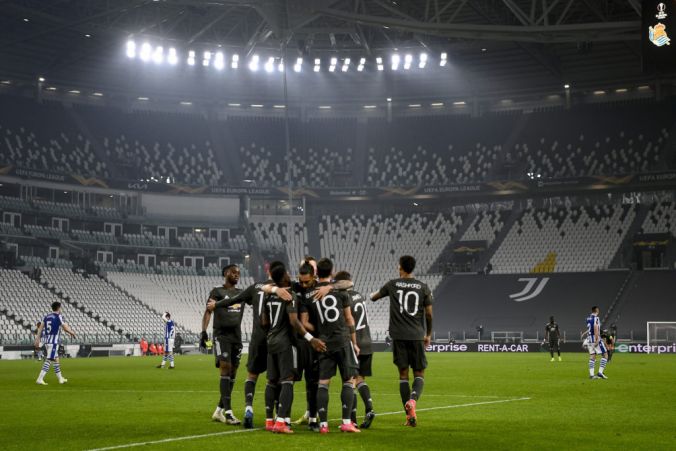 Having dropped out of the Champions League, the Red Devils secured a comprehensive round of 32 first-leg victory at Juventus’ Allianz Stadium after winning just two of their last six matches in all competitions.

Fernandes netted either side of half-time to put United in control against Sociedad, with Marcus Rashford and Daniel James completing a 4-0 victory that all but wraps things up ahead of next week’s return leg at Old Trafford.

Spanish government’s restrictions saw this tie moved from San Sebastian to Turin, where Rashford atoned for missing a great chance by lifting a superb ball over for Fernandes to capitalise on chaotic Sociedad defending.

The Portuguese added another early in the second half when superbly firing home from James’ lay-off, with the video assistant referee overturning the original offside call.

Rashford’s pass was key to that goal and the forward forgot his first-half profligacy when turning home United’s third, with James grabbing a fourth as they ended their nine-match winless run against Spanish sides in style.

Play got off to a helter-skelter start in Turin, where ex-United winger Adnan Januzaj bent a left-footed effort just wide of the top corner after a mistake by Eric Bailly.

United burst up the other end and Rashford saw an effort denied by goalkeeper Alejandro Remiro, only for Sociedad to respond as Alexander Isak raced beyond a sleeping Bailly to force Dean Henderson into a save.

All of that happened in the opening 131 seconds of a match that continued frantically, with Aaron Wan-Bissaka booked for an early foul on ex-Arsenal defender Nacho Monreal.

Sociedad looked comfortable on the ball but United were prodding their defence, with Scott McTominay getting behind and seeing a low shot saved.

United wasted an even better chance to open the scoring in the 19th minute.

Fernandes was put through by a fine Alex Telles ball and crossed for Rashford, who could only fire straight at an onrushing Remiro. The ball looped up and Fernandes headed it back towards goal, only for Robin Le Normand to clear off the line.

But the pair would combine more successfully eight minutes later, when Rashford clipped a lovely ball over the Sociedad defence to put the Portuguese through.

Fernandes watched Le Normand, Igor Zubeldia and Remiro collide in their attempts to cut it out, then kept his cool to find the back of the net.

It was a deserved lead but Sociedad kept United on their toes and began to crank up the pressure as half-time approached, with Mason Greenwood getting back well to clear a cross that Monreal looked set to turn home.

Manchester City great David Silva was beginning to show flickers of quality at this point, with Henderson denying a hopeful Le Normand effort before Harry Maguire stopped Isak pouncing in the early stages of the second period.

But United had pinpointed how to punish the Spanish team and extended their advantage in the 57th minute.

Fernandes let a low Rashford ball from the left run through to James, whose touch under pressure from Monreal put the Portuguese through to hit a lovely first-time finish into the bottom right-hand corner.

The United playmaker was angered to see the flag go up for offside but the VAR cleared the goal upon review.

The Red Devils put their foot on the throat of Imanol Alguacil’s men, pulling away even further eight minutes later.

Fred threaded a lovely ball through to Rashford, who opened his body up and coolly slotted a low right-footed shot past Remiro.

James would have scored a quickfire fourth had Greenwood not just strayed offside in the build-up, with the Wales international later denied by Remiro’s feet.

Greenwood dragged wide before being replaced by fellow teenager Amad Diallo, who came on for his debut and was soon celebrating with James as the winger’s low strike wrapped up an excellent win.