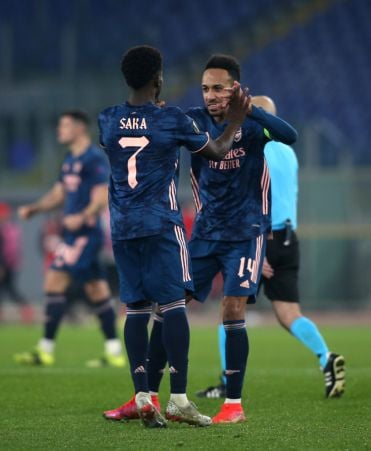 Pierre-Emerick Aubameyang was guilty of missing a number of chances as Arsenal had to settle for a draw in the first leg of their Europa League round-of-32 tie against Benfica.

With the game being played at Rome’s Stadio Olimpico due to current coronavirus travel restrictions, the Gunners were classed as the away side and should have left Italy with a win.

Instead, Bukayo Saka’s sixth goal of the season rescued a 1-1 draw after Pizzi had put Benfica ahead from the penalty spot.

It leaves the tie finely poised heading into next week’s second leg, which will take place in Athens with Arsenal this time the ‘home’ team.

Mikel Arteta named an unchanged side for the first time in his managerial career – Arsenal keeping the same starting XI in successive matches for the first time since a 2-1 win away at Newcastle in the Premier League on September 15, 2018.

The Spaniard saw Arsenal crash out at this stage of last season’s Europa League on away goals to Olympiacos, with Aubameyang missing a sitter in the dying stages that night at the Emirates Stadium.

The Arsenal striker had another evening to forget here, fresh from hitting a hat-trick in Sunday’s win over Leeds.

Already in the news after potentially breaking the club’s Covid protocols to get a new tattoo, Aubameyang wasted a fine early chance when he fired wide from close range after being picked out by Hector Bellerin.

There was very little goalmouth action to speak of for the remainder of the first half, even if Benfica’s central-defensive partnership of ex-Tottenham man Jan Vertonghen and Nicolas Otamendi, formerly of Manchester City, looked to be struggling to contain the pace of Arsenal’s forwards.

We deserved better and i should Score couple goals today but still one Game to Go we keep going. Well done @BukayoSaka87 🌶 pic.twitter.com/geuDwU23N9

Saka scuffed a shot wide following a decent passing move at the start of the second half as Arsenal still could not find their shooting boots.

Benfica would immediately go up the other end and take the lead. Emile Smith Rowe was adjudged to have blocked Diogo Goncalves’ cross with an outstretched arm and referee Cuneyt Cakir pointed to the spot.

Pizzi would coolly slot the resulting penalty past Bernd Leno to put the de facto home side ahead.

Arsenal would not be behind for long, however, with Saka levelling less than three minutes later as he tucked away a low Cedric Soares centre after the former Sporting full-back had been found with a fine Martin Odegaard pass.

With both sides now creating more chances, Leno had to pull off a good stop to keep out an effort from substitute Rafa just after the hour.

Aubameyang would then steer a strike just wide from another precise Odegaard ball before opting to try and check back inside instead of unleashing a left-foot shot.

Arteta had seen enough and substituted Aubameyang with 14 minutes remaining as Gabriel Martinelli replaced his captain as the central striker.