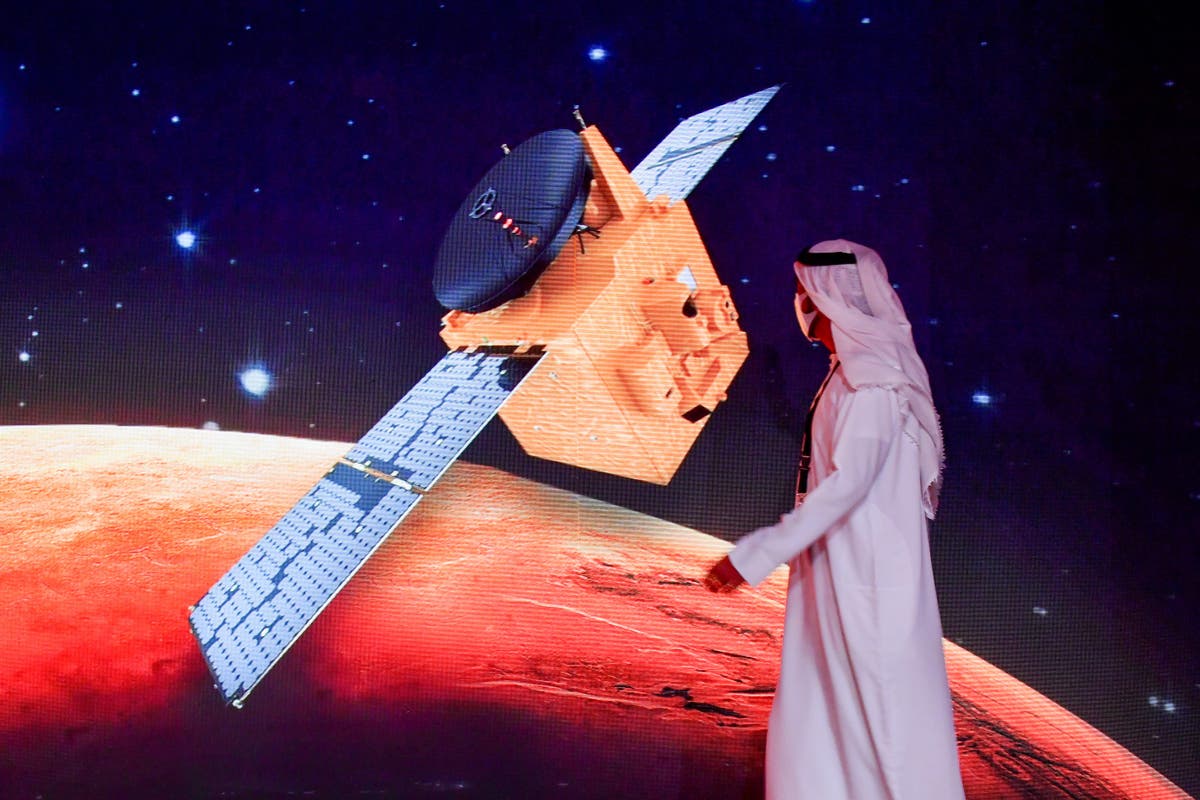 The Hope spacecraft has launched from the United Arab Emirates and is set to reach Mars, orbiting the Red Planet to study its climate.

The craft is currently travelling at over 120,000km/h (75,000mph), but a tense 30-minute period as it enters the planet’s gravitational pull will dictate the success of the mission. The 27 minute-long manoeuvre will see the spaceship disappear behind the planet – unable to be monitored from the Earth.

The probe relies on its autonomous behaviour to overcome the 190 million kilometre gap in distance between the Earth and Mars; it takes 11 minutes for a radio command to reach the craft, far too long to be adequately controlled.

Should it prove successful, Hope will study how energy moves through the Martian atmosphere. It will track the movement of hydrogen and oxygen atoms at the top of the atmosphere, as well as lofted dust which has a significant effect on the planet’s temperature.

Hessa Al Matroushi, Science Lead for the mission at the UAE’s Mohammed Bin Rashid Space Centre, said: “The science of the mission is enabled by a unique highly elliptical orbit that Hope will adopt when it starts its two-year science mission. The orbit offers an unprecedented local and seasonal time coverage of the Martian atmosphere. Combined with the unique instrumental synergy, Hope will explore Mars different atmospheric layers revealing new and global perspective of its atmospheric behaviour and connections.”

Sarah bint Yousef Al Amiri, UAE Minister of State for Advanced Technology and  Chair of the UAE Space Agency, said: “Hope reaches Mars at a profound double anniversary: 2021 marks both the 50th anniversary of the Emirates and 50 years since the first man-made object landed on the Red Planet. As a young nation, it is a particular point of pride that we are now in a position to make a tangible contribution to humanity’s understanding of Mars. This also marks an important point for the Emirates to continue the drive to diversity its economy utilizing science and technology.”

Omran Sharaf, EMM Project Director at the Mohammed bin Rashid Space Centre, said: “MOI was the most critical and dangerous part of our journey to Mars, exposing the Hope probe to stresses and pressures it has never before faced. While we have spent six years designing, testing and retesting the system, there is no way to fully simulate the impacts of the deceleration and navigation required to achieve MOI autonomously. With this enormous milestone achieved, we are now preparing to transition to our science orbit and commence science data gathering.”

It is possible that this research could be the foundation for human settlements on Mars, as day-by-day information about the climate of the alien would could be used to help design shelters and other technology that could be used off-world.

The UAE has become the fifth country in the world to reach Mars as the Hope probe successfully enters orbit around the planet.

In approximately four minutes, scientists will know whether the Hope probe has been successful in its descent.

While the probe is impossible to control from Earth and acting autonomously, there are numerous failsafes built in to ensure that it continues.

Should one thruster go down, for example, another will be halted to ensure the probe remains level. The craft will then continue its descent, but will take longer to do so – a better outcome, however, than losing the craft in a crash.

Should the descent be successful, the probe will gather up to 1,000 gigabytes of scientific data about the Martian atmosphere.

This information will be shared with 200 scientific and academic institutions globally for free, Arab News reports.