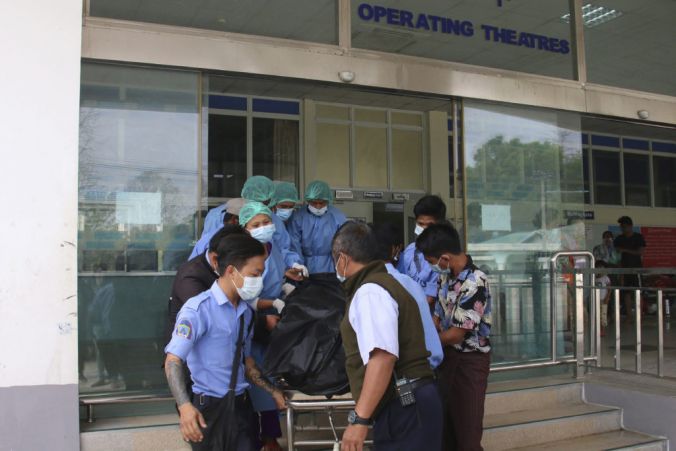 A young woman who was shot in the head by police last week during a protest against the military coup in Myanmar has died, her family said.

It was the first confirmed death among thousands of protesters who have faced off against security forces since the junta took power on February 1, detained the country’s elected leaders and prevented parliament from convening.

Mya Thwet Thwet Khine was shot during a demonstration in the capital, Naypyitaw, on February 9, two days before her 20th birthday. Video showed her sheltering from water cannons and suddenly dropping to the ground after a bullet penetrated the motorcycle helmet she was wearing.

She had been on life support in a hospital with what doctors said was no chance of recovery.

Her sister, speaking from the hospital’s mortuary, urged people not to give up their struggle to restore democracy.

“Please participate and continue fighting until we achieve our goal,” said Mya Thatoe Nwe. She said the funeral will be held on Sunday.

Protesters have hailed Mya Thwet Thwet Khine as a hero and commemorated her during demonstrations earlier this week. News of her death is likely to inflame the protest movement, which has embraced non-violent civil disobedience.

A spokesman for the ruling military did not deny she had been shot by security forces, but said at a news conference this week that she was in a crowd that had thrown rocks at police and the case was under investigation. There were no independent accounts of her taking part in any violence.

Human Rights Watch accused the police in Naypyitaw of having “blood on their hands”.

Mya Thwe Thwe Khine, protester shot in the head by #Myanmar forces, died of her wounds. She was taken off life support w/her family's permission.

Our @hrw report shows no justification for use of lethal force. Those responsible must be held to account. https://t.co/kbO4aFTAJT pic.twitter.com/7uCgWFEjtG

“The officer who pulled the trigger must be investigated, arrested and prosecuted to the fullest extent of the law,” said Phil Robertson, deputy Asia director of the New York-based group. “That’s the only suitable way to honour the memory of this brave young woman.”

Demonstrations continued on Friday in Yangon, the country’s biggest city, and elsewhere.

Security forces have been relatively restrained so far in confronting protesters in Yangon, but appeared to be toughening their stance in areas where there is less media presence.

Police used force for a second day to arrest protesters in Myitkyina, the capital of the remote northern state of Kachin. The Kachin ethnic minority has long been in conflict with the central government, and there has been intermittent armed struggle against the army there for decades.

On Thursday night in the south-eastern city of Dawei, several people were wounded by rubber bullets when police staged night-time raids to try to arrest activists, local media reported.

Large but peaceful protest marches have taken place in the city, with negotiations between the demonstrators and authorities to avoid confrontations.

The election outcome, in which Ms Suu Kyi’s party won by a landslide, was affirmed by an election commission that has since been replaced by the military. The junta says it will hold new elections in a year’s time.

The US, Britain and Canada have imposed sanctions on the new military leaders, and they and other governments have called for Ms Suu Kyi’s administration to be restored.

The coup was a major setback to Myanmar’s transition to democracy after 50 years of army rule. Suu Kyi come to power after her National League for Democracy party won a 2015 election, but the generals retained substantial power under the constitution, which was adopted under a military regime.