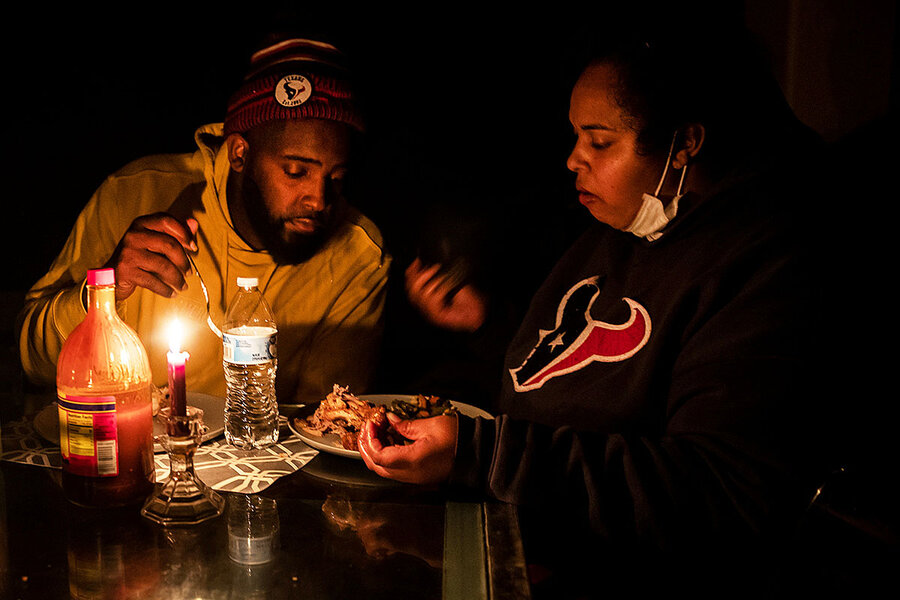 On Valentine’s Day, every county in Texas went under a winter storm warning. The next day, the lights began to go out. In the days since, millions of Texans have been without power in freezing temperatures. Millions are now boiling water, and impassable roads and food scarcity are also a worry across the state.

But for a select few on the fringes of the Lone Star State, the winter storm did not precipitate a larger, longer, emergency. For residents in El Paso, at least – in the state’s far western corner – it’s meant a few days of building snowmen, staying indoors and off the roads, and learning that the city is on a different electrical grid than most of the rest of the state.

“I was unaware we were on a different power grid,” says Telma De La Rosa, who has lived in El Paso all her life. She had also, until this week, never heard of the Electric Reliability Council of Texas (ERCOT), the nonprofit responsible for the isolated grid delivering electricity to about 85% of the state.

In fact, before this week many Texans were unaware they lived in the only state in the contiguous U.S. to have its own electric grid, let alone were pressing to reform it. But as ERCOT announced that the grid will “begin to return to more normal operation conditions” today, the state’s unique electricity infrastructure is under intense scrutiny.

It has not been lost on observers that this is happening in the most energy-rich state in the nation. Many experts point to the current shortage as a lesson on the need for investments to keep power grids functional. That lesson, they say, is particularly relevant in an era of growing weather extremes and lifestyles that are increasingly electrified – from home and work necessities to next-generation cars.

“Texas has been providing a reliable service at a pretty great price,” says James Coleman, an energy law expert at Southern Methodist University. “But now we see they’ve been cutting corners on some things.”

“Winterization” of energy infrastructure in Texas, specifically, has been a corner that seems to have been cut. As the state froze this week, so did some of its pipelines, instruments in some power plants, coal piles, natural gas wells, and – to much news fanfare – wind turbines. Just as the weather was increasing Texans’ demand for power, it was freezing out big chunks of its power supply.

As a result, ERCOT asked utilities to shed power load to avoid uncontrollable blackouts across the state. But this alternative – rolling blackouts managed by local utilities – hasn’t worked either. Instead of “rolling,” blackouts have been stationary, keeping millions of homes in the dark while sparing others.

Energy infrastructure is a complex beast even when things are working well. For a Texas electrical grid optimized to keep homes cool in the summers, a polar vortex in February was in many ways the worst kind of extreme weather event. The event has exposed flaws in the state’s market-friendly grid system – with blame being apportioned from ERCOT to local utilities to fossil and renewable energy sources.

Being connected to other power grids like the rest of the country – via the Eastern Interconnection and Western Interconnection – would have made a difference “around the edges,” according to Professor Coleman, but given the size of Texas’ economy and population, “it’s not insane for it to have its own power grid.”

Having an isolated grid has even been a benefit, such as helping Texas become the leading wind power state in the country. ERCOT’s “unique environment” means it can avoid “the protracted negotiations and regulatory approvals that often delay transmission projects that cross state lines,” according to a report from the Southern Legislative Council.

What has been more damaging this week has been the fact that ERCOT is more market-driven than other grid systems. On the Texas grid, power plants are only paid if they’re producing energy – known as an energy-only market. (Many other grids are “capacity” markets, where plants are also paid to be on standby.) While that generally keeps prices low because Texans only pay for electricity they’re using, extreme weather can throw that market out of whack.

Wholesale electricity prices in Texas jumped from around $25 to about $9,000 per megawatt-hour earlier this week. (Griddy, a small Houston-based utility, advised its 29,000 customers this week to switch providers to avoid huge bills.)

But the combination of an extremely competitive electricity market and a lack of interstate or federal oversight has meant there’s been little incentive to invest in hardening or upgrading energy infrastructure in the state.

After a 1989 cold snap, the Public Utility Commission of Texas, the agency that oversees ERCOT, had recommended improvements in the winterization of electricity generators. “These recommendations were not mandatory, and over the course of time implementation lapsed,” noted a federal report into a 2011 grid failure. “Many of the generators that experienced outages in 1989 failed again in 2011.”

And many of the failures witnessed in 2011 repeated again this week – though it should be noted that some of the failures, like in natural gas production, were out of ERCOT’s control.

In El Paso, meanwhile, the local utility made $4.5 million in winterization investments after the 2011 winter. These improvements came at a cost to customers – as does being part of an interconnected grid system – but for some locals it’s now looking like a price worth paying.

“I hear a lot of people telling me electricity in El Paso is more expensive,” says Jose Enriquez, who worked for the local utility, El Paso Electric, for three years. But for places with cheaper rates, “you may be seeing some of the drawbacks to that now.”

Mr. Enriquez doesn’t feel an iota of schadenfreude, it needs to be said. He feels heartbroken for fellow Texans forced to find friends, family, or others with power to shelter with, especially given the other disaster that’s been unfolding in the state.

“You’re in a pandemic. You’re supposed to be social distancing. But you have to choose the shorter of the straws,” he says. “I just feel bad.”

This week has seen various calls for accountability from state officials for a disaster that has so far claimed at least 30 lives around the country.

Gov. Greg Abbott has called for ERCOT’s entire leadership to resign, and made reform of the corporation an emergency item for the state legislature. Members of the state’s congressional delegation, in both parties, have sent letters to the corporation demanding answers. In the clearest call for change yet from an elected official, Lyle Larson, a Republican state legislator from San Antonio, has called for the creation of a hybrid market (blending “energy-only” and “capacity” elements) that connects to other grids.

A full investigation into the grid failures needs to be carried out, experts say, but there’s little doubt that the crisis has revealed a need for urgent change. Market influences need to be relaxed for the sake of improved reliability and resiliency, both in the short and long term.

“There were over 4 million Texans without power in cold homes. … That’s unacceptable at any cost,” says Joshua Rhodes, a research associate at the University of Texas, Austin, Energy Institute. “We’ve got to do something.”

Connecting to other grids, for example, is at least worth looking at, experts say. Demand is only going to increase as electrification expands, from homes and buildings to cars and public transit. And access to a broader power supply will help ensure reliability with climate changes expected to bring more extreme and unpredictable temperature changes.

“An electricity outage is a much more catastrophic problem than it used to be,” says Professor Coleman.

“What we considered acceptable for outages 15 years ago aren’t acceptable anymore,” he adds. “And what we’re accepting now won’t be acceptable in 15 years.”

For an example of how it could change, officials may only need to look to their state’s far western corner. Since 2011, El Paso Electric infrastructure has been able to withstand -10 degree weather, and a dual oil and gas power station built after that cold snap has helped the utility meet the electricity demands of the past week.

“EPE continues to make investments based on lessons learned from that cold snap 10 years ago,” said George De La Torre, a spokesman for the utility, in an email. “Our diverse mix of generation and fuel [has] helped ensure a safe and resilient electric grid.”