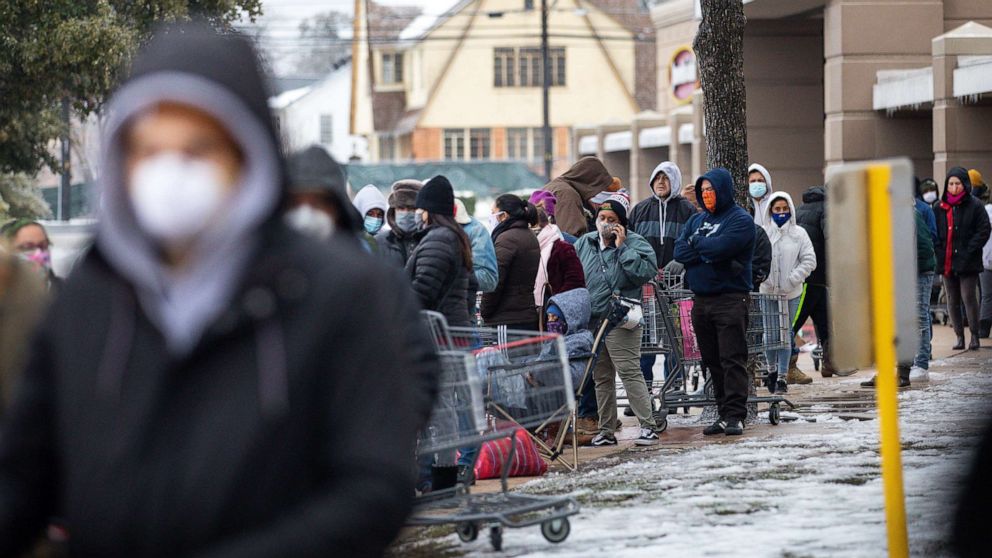 Donna Sue Taylor didn’t know the cold was coming. Her blue-gray tent, pitched in one of Houston’s storm drainage bayous, has enough room for her three dogs: Gigi, Bella and Star. With no television or phone to alert her to an impending storm though, she relies on word of mouth for news.

After living this way on and off for nearly 20 years, she figured the hand-spun yarn blankets she makes would offer enough warmth through Texas’ mostly mild winter.

Valentine’s Day morning, her fingers started to freeze. And her toes. No matter how many layers she put on her thin frame, the freeze was creeping in. Gigi was shivering. She got a ride downtown, where she heard the George R. Brown Convention Center was taking people in.

“I’ve never been to a shelter before,” Taylor, who is 60, told ABC News from her cot. “But I was worried about me and my animals. I didn’t want to die.”

The ruthless cold sweeping through Texas hit hard, and has affected nearly everyone. Grocery shelves were stripped bare and millions were without power or water for days on end.

“If you have the means, you can pack up your family and go to a hotel,” Houston Mayor Sylvester Turner told ABC News. “If your pipes burst, your home becomes in many ways, unbearable, and you don’t have the luxury of packing up and going someplace else — you’re relegated to just deal with it where you are.”

Taylor waited in line outside the convention center for six hours Sunday. The center accepted about 800 people — a fraction of its regular capacity during emergencies.

During Hurricane Harvey, evacuees streamed in by the busload to fill the same Houston convention center with 10,000 people.

“Dealing with the virus, in a storm like this, means our normal emergency shelters cannot take in new people,” Mike Nichols, CEO and president of Coalition for the Homeless of Houston and Harris, Fort Bend and Montgomery counties.

“Normal operating capacity has been cut in half because of social distancing,” said Mark Eichenbaum, special assistant to the mayor for Homeless Initiatives in Houston. “Our response plan to really handle a surge of increased shelter need were virtually offline because of COVID.”

Some shelters had to stop taking people in — either when they hit capacity or their own power failed and pipes burst.

“These are compounding, cascading problems that impact marginalized low-income and communities of color across Houston. And that’s what we’re saying, it’s more than no power,” Robert Bullard, a distinguished professor at Texas Southern University and leading expert on environmental justice, told ABC News.

Jim “Mattress Mack” McIngvale’s kindness during Hurricane Harvey went viral after he turned his Gallery Furniture showrooms into evacuation shelters. The storm prompted him to step up again.

He set aside 10,000 gallons of diesel in prep for the generator at their Houston store, where they estimated a couple hundred people could find a bed. His Richmond store, however, had to close due to a power outage, where pipes burst “like a fire hydrant full steam.”

At his Houston site, pipes froze on Wednesday. His team filled 55 gallon trash cans with water to prime the toilet pumps. Finding meat to keep feeding his sheltered wasn’t easy, as grocery store stocks got bought out, or closed early. But with his means, McIngvale sought to bridge the gap for those with less financial cushion, citing a “responsibility for the wellbeing of the community.”

“For those of you who don’t have the means, it’s not as easy to go into a grocery store and purchase the water that you need,” Turner said. He announced the city would host a mass bottled water distribution site Friday.

Turner said the city is focused on underserved populations, including people experiencing homelessness and those who have less access to services that can help.

“We certainly need to focus on these communities that have been underserved for decades to bring them up,” Turner said. “Going without power for example, in the city, in the [United] States, for this long, is something that’s unacceptable to be quite candid with you. And so we need to make sure that we get it right.”

With the deep freeze casting stark relief on the haves and have nots — Turner expressed concern about how the added challenges will impact people who might be struggling with homes not well insulated from the cold and difficulty accessing supplies,

“This storm has no respect of person, it has no eyes,” Turner said. “Nonetheless, the impact on your family, your home, therein is dependent on your social economic status.”

At least 40 people have died in states hit hard by the extreme cold temperatures, according to The Associated Press.

With so many hunkered down in their homes, Turner said, the grim truth is that the full death toll may not be known until the bitter cold has abated.

“We have been working very hard to try to keep that number down,” he said. “Whether it’s a hurricane, whether it’s the coronavirus, and now it’s this winter storm, and it’s back to back to back — at some point they began to say, you know — how much more can I bear? How much more must I endure?”

Consumers will end up paying for the utility services’ lack of preparedness, said Leah Stokes, an assistant professor of political science at the University of California, Santa Barbara.

“Those are going to be really significant household costs that have been basically pushed on everyday people,” Stokes said.

Even after the power comes back on, Bullard expressed concern for households struggling to pay high electric bills or for burst water pipes.

“If you’re working at two minimum wage jobs, that $200 can be a substantial part of your budget,” he said. “Let’s not minimize the pain and suffering that’s occurring across Texas.”

When the cold abates, Taylor plans on returning to her tent in the bayou, she said. Meanwhile, outreach teams at the convention center are working with her to find more stable housing.

“Just because you’re homeless doesn’t mean you’re not human — what, because you just can’t afford it?” Taylor said. “This [storm] makes me wish that I was rich so I could help people.”