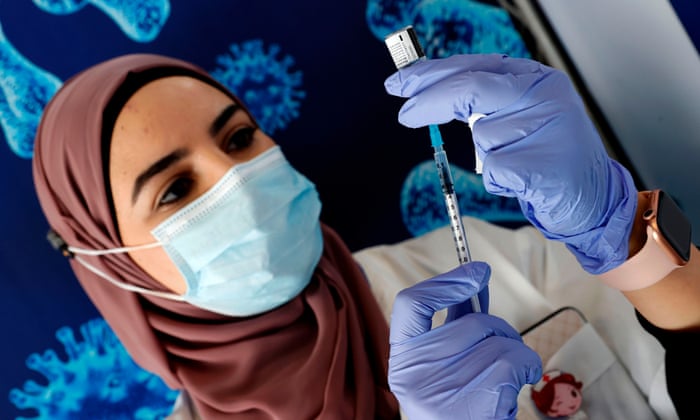 A single dose of the Pfizer/BioNTech vaccine gives people 85% protection from Covid-19, according to a study from Israel.

Pfizer has consistently said that two doses of the vaccine are needed for high efficacy. In clinical trials, it reported efficacy of 52.4% after one dose, but 95% after two doses.

The UK government in December nonetheless decided on a policy of giving as many people as possible a first vaccine shot by increasing the gap between doses of the Pfizer and the Oxford/AstraZeneca vaccine. The second dose is now given up to 12 weeks after the first.

Pfizer/BioNTech has not supported the approach, arguing that the vaccine has not been through trials to show what efficacy looked like after three months with one dose.

A team of researchers in Israel, which is ahead of every other country in its immunisation programme and is using the Pfizer/BioNTech vaccine, has found that efficacy is high just before people have their second dose.

In the Lancet medical journal, staff at the Sheba Medical Centre, the country’s largest hospital, published their analysis of data from the vaccination of more than 9,000 healthcare workers.

They found that efficacy increased over time. “What we see is a really high effectiveness right after two weeks, between two weeks to four weeks after vaccine, already high effectiveness of 85% reduction of symptomatic infection,” Gili Regev-Yochay, co-author of the study, told a small group of journalists.

Including asymptomatic cases, the efficacy was 75%. People in Israel receive their second dose at around three to four weeks after the first, but scientists do not expect the efficacy to wane in the couple of months after a single dose.

Their findings are in line with evidence from Public Health England in December, which supported the UK government’s decision to increase the gap in dosing. The manufacturer’s data showed that the vaccine was only 52.4% effective between the first and second dose. The PHE paper, however, said the figure “includes Covid-19 infections occurring shortly after the first dose, an interval within which this dose would not be expected to have had an effect [ie prior to the recipient mounting an immune response].”

PHE re-did the sums using only infections that occurred from 14 days after the first dose, and found efficacy of around 90% before the second dose.

Also in the Lancet, Oxford University has published the detailed results of an analysis of the data in trials of the vaccine it made with AstraZeneca, looking at efficacy after a single dose.

The paper found that the efficacy of a single dose was 76%, measured after the first 22 days. People who received two doses, 12 weeks apart, had protection of 85% against symptomatic disease, while for those whose two doses were given six weeks apart it was 55%.

“Vaccine supply is likely to be limited, at least in the short term, and so policymakers must decide how best to deliver doses to achieve the greatest public health benefit,” said the lead author, Prof Andrew Pollard.

“Where there is a limited supply, policies of initially vaccinating more people with a single dose may provide greater immediate population protection than vaccinating half the number of people with two doses.

“In the long term, a second dose should ensure long-lived immunity, and so we encourage everyone who has had their first vaccine to ensure they receive both doses.”

All the vaccines have been shown to protect against severe disease, hospital admission and death, but the big outstanding question is whether they can reduce transmission of the virus, which would slow the pandemic. A study as yet unpublished from Israel may suggest they do.

According to the Reuters news agency, an analysis of data from a study by the Israeli health ministry and Pfizer has found that its vaccine reduces infection in asymptomatic cases by 89.4% and in symptomatic cases by 93.7%. Neither the ministry nor the company has confirmed the findings.

Medieval treasure, Nazi pressure: Germany struggles to keep up with demands of its past