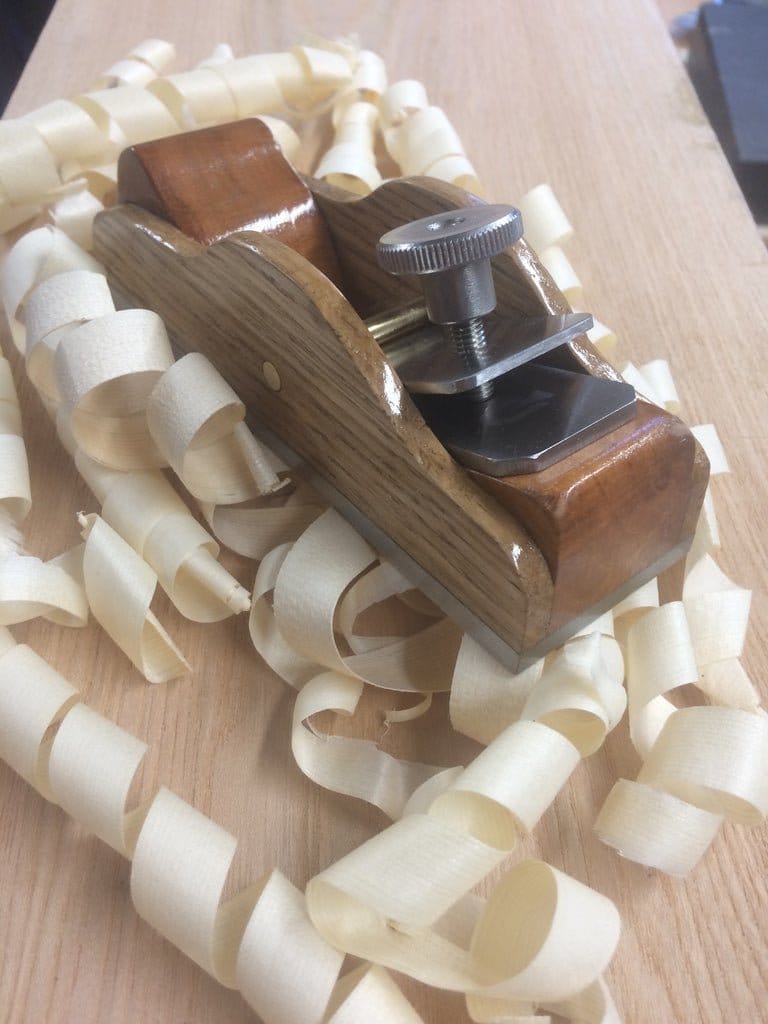 Greetings to all lovers of homemade products and those who just looked at the site in search of interesting ideas. Today I will present to your attention, as well as describe the process of making a one-handed plane. The idea belongs to the author dabelu. Once I have already described such homemade products, told how to update a plane, and you can also find in my profile an option for making a zenzubel (a type of plane). Therefore, I decided to supplement the arsenal of this tool with another option, because a plane in a carpentry workshop is never superfluous. In addition, not everyone can afford a power tool. In general, I will not waste time, I will go straight to the point.

The author began making the instrument by preparing the sole for it. The second polished the strip of iron along one plane, on which the rest of the part will be glued in the future. It is not necessary to make it perfectly flat. I used a homemade belt sander for grinding. To keep the metal on the tape and at the same time not injure the hands, I glued strips of double-sided tape to it and held the blank with a wooden block. 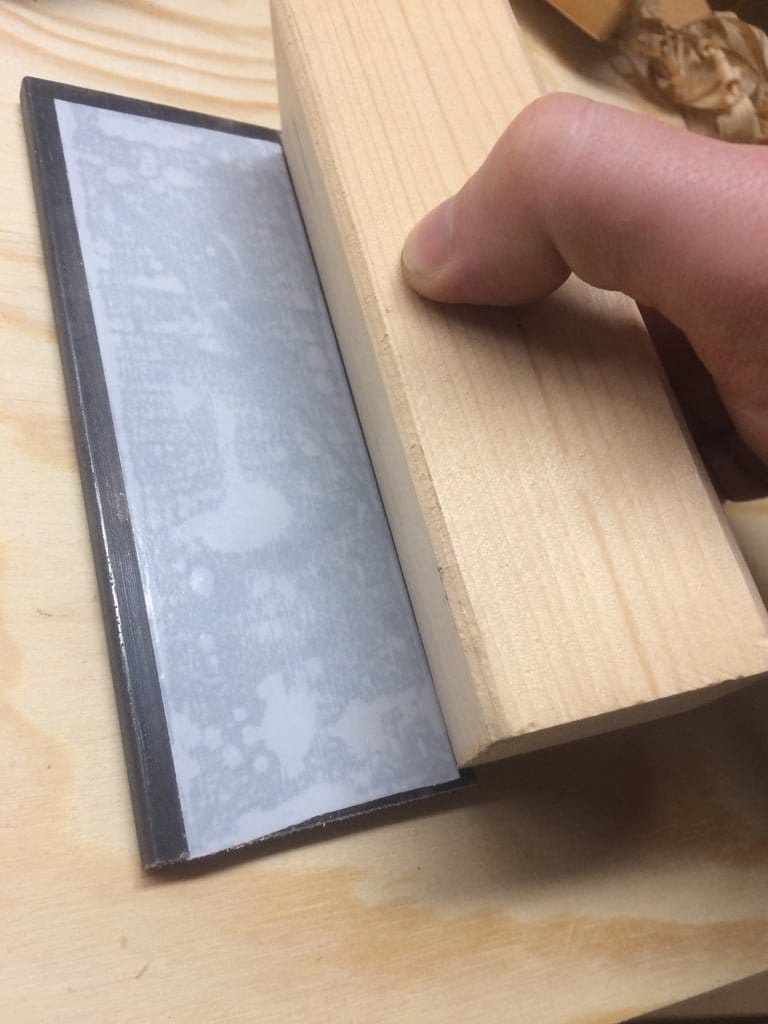 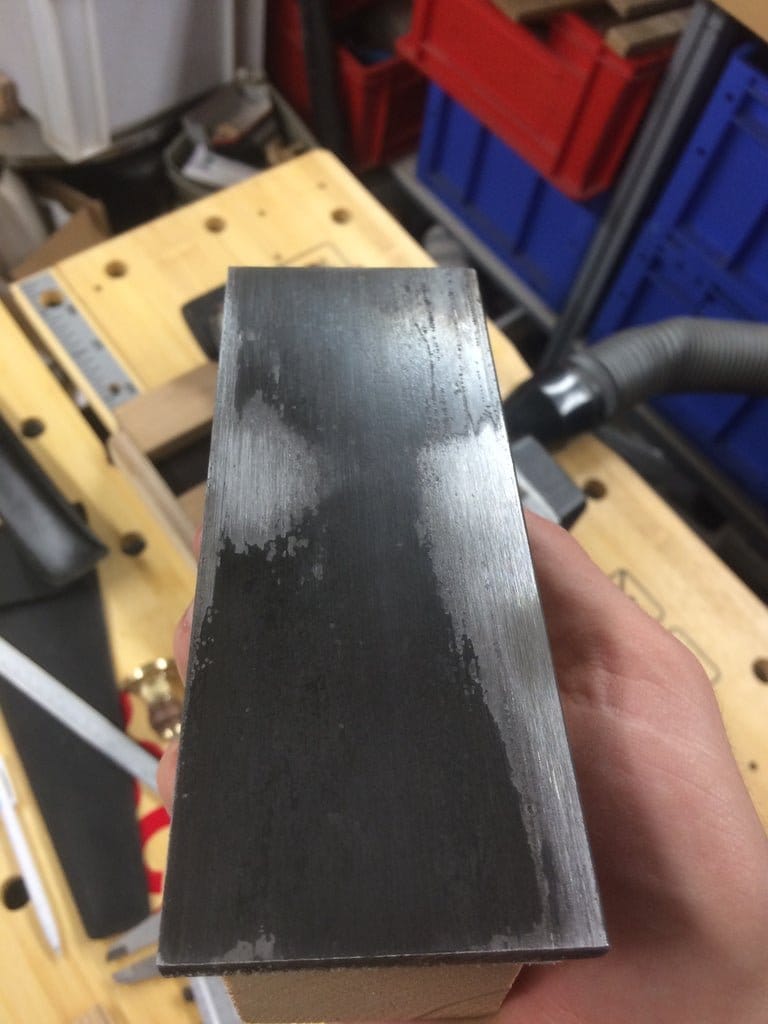 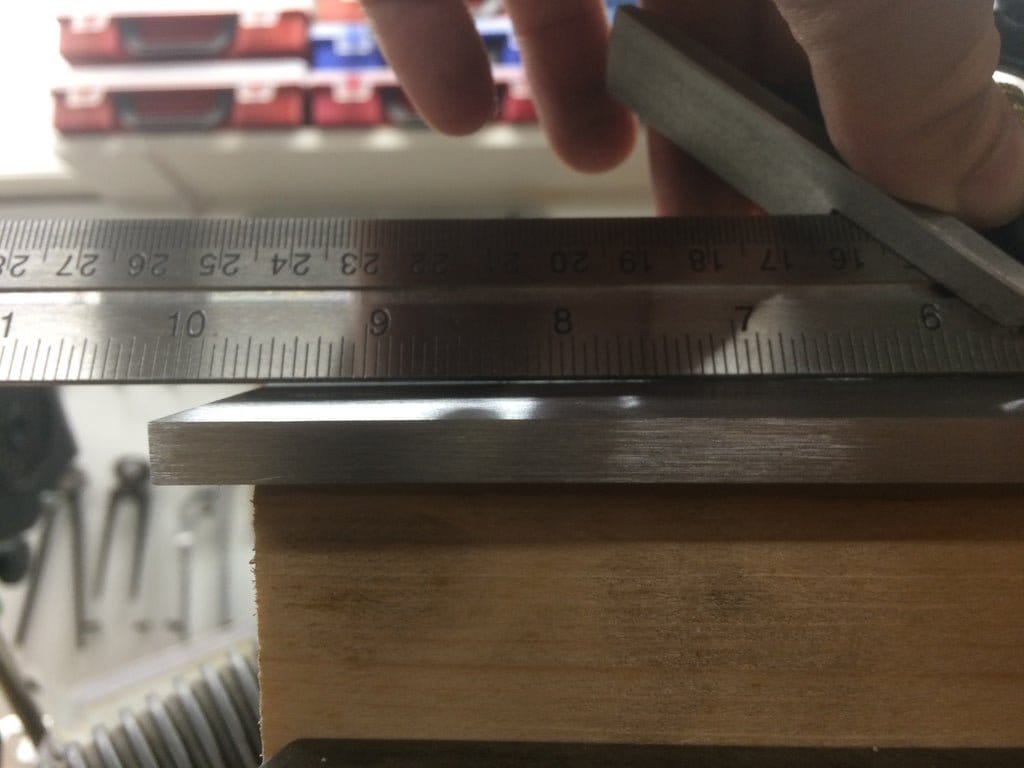 At the next stage, the author started preparing the side walls of the instrument. For this he used a 27 mm thick piece of oak. Unfortunately, its width is not indicated, I can guess at a glance that it is 7-8 cm.This block (the author has it already of the required length) marked and sawed lengthwise in thickness into two identical blanks (in thickness). Then, on one of the blanks, I drew the outline of the wall with a pencil. Then he glued the two parts together along the plane with double-sided tape, clamped the blanks in a vice and cut off the excess. After that I processed the cut with a rasp and sandpaper. 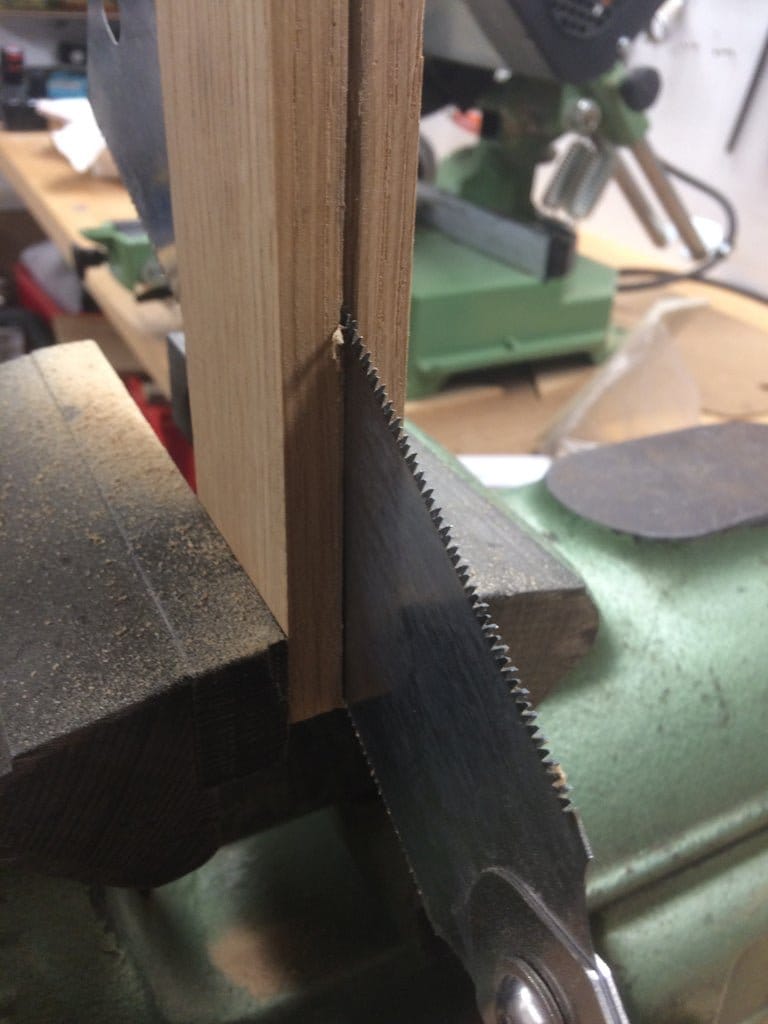 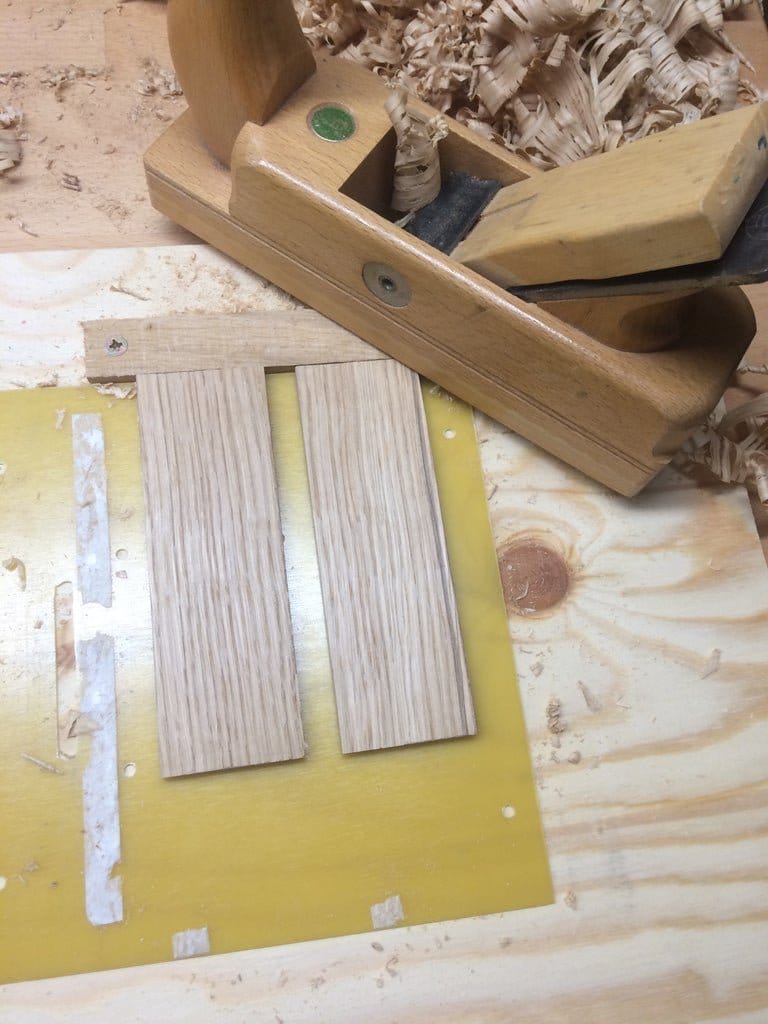 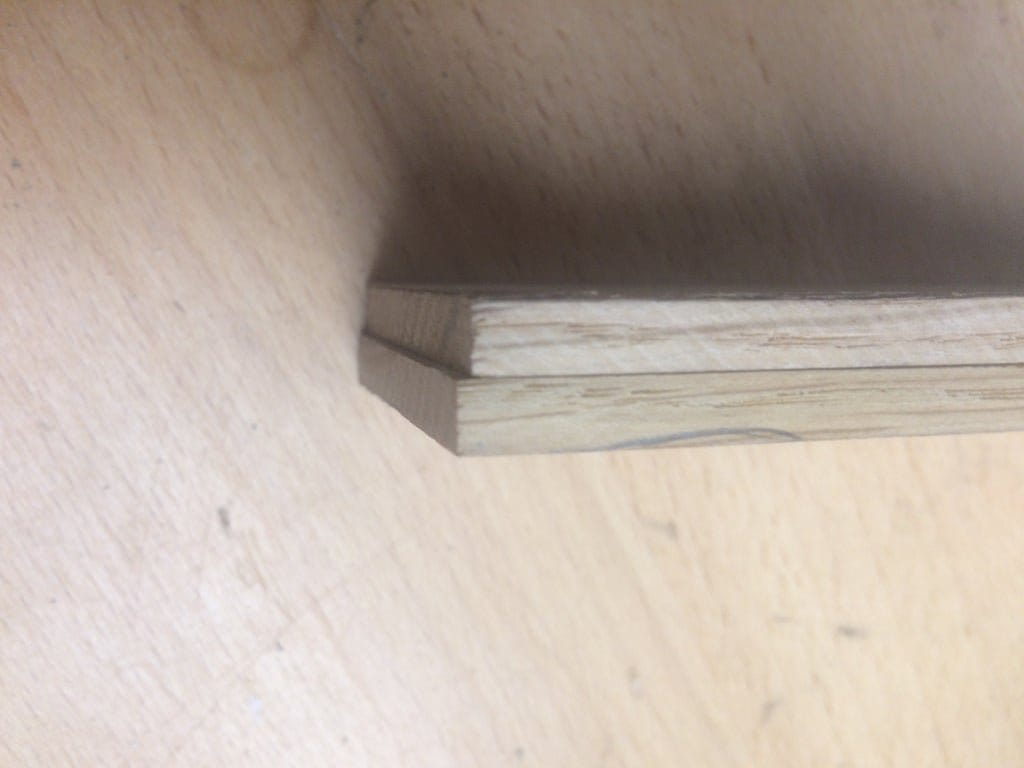 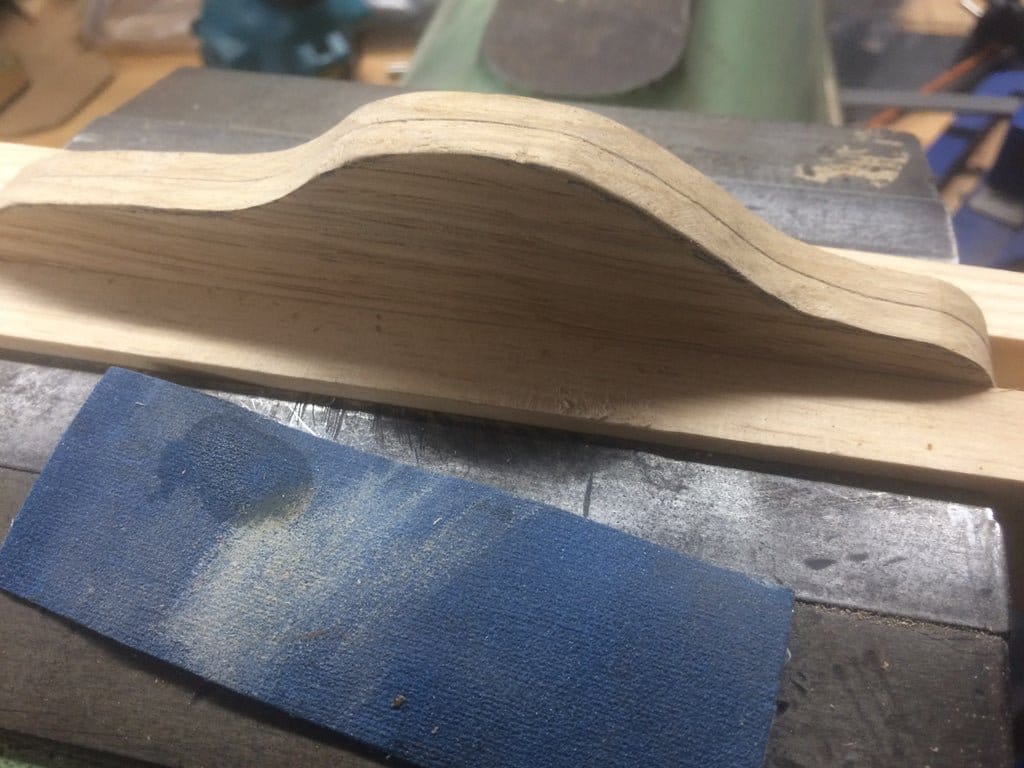 At this stage, the author continued preparing the sole of the instrument. It needed to be reduced in width. To determine the required size, I laid two sidewalls on it, and between them a steel strip, from which the blade will be made. Then he made the markings and sawed off the excess with a hacksaw along the line for metal. Next, you need to saw out the channel for the blade. Here he uses a drill with metal drills. The method is a bit unusual, but apparently he had no other options. He also made the markings, then drilled holes, at an angle, and then processed everything with a file. On one side, the groove for the blade has a slope of 20 degrees. 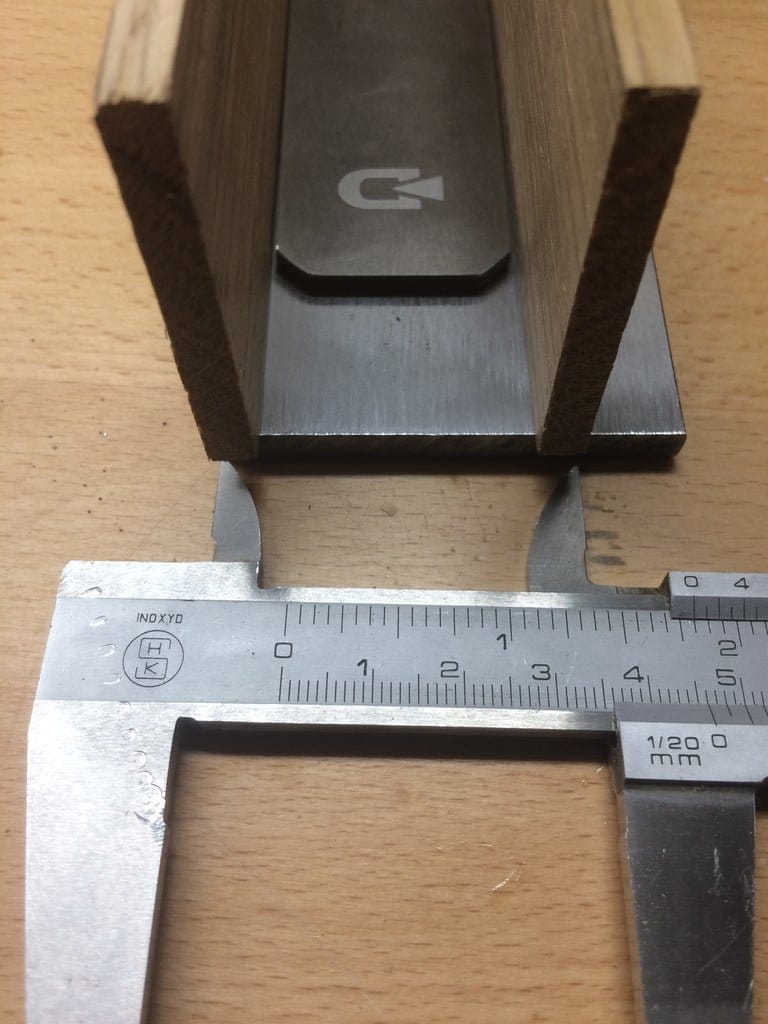 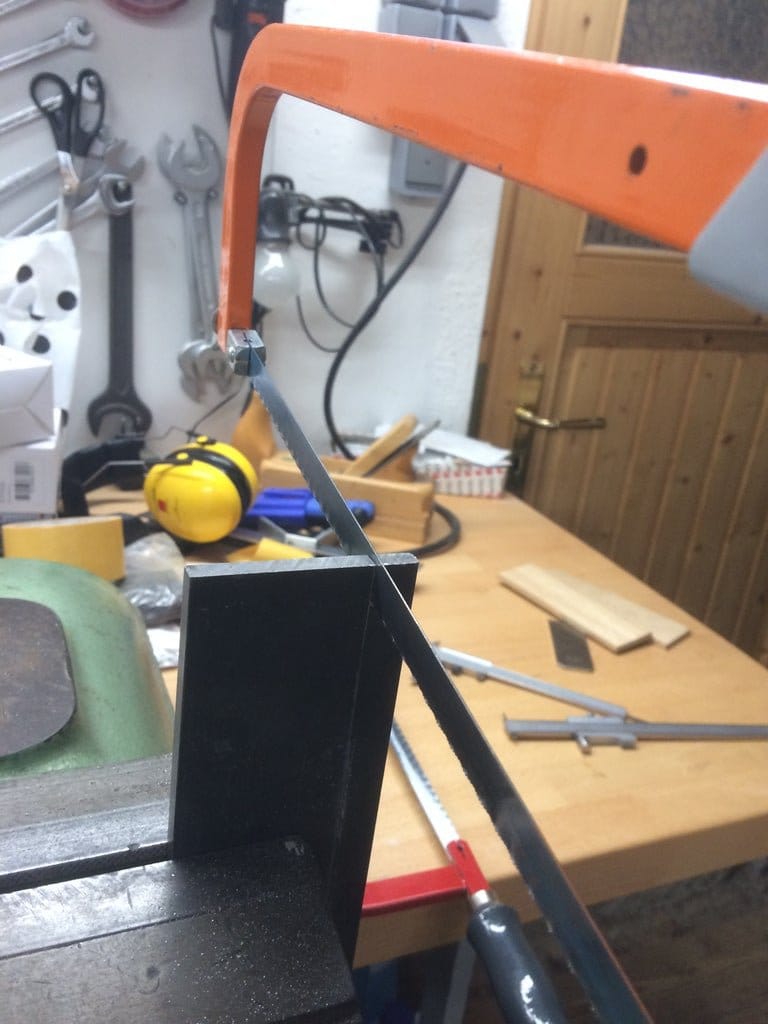 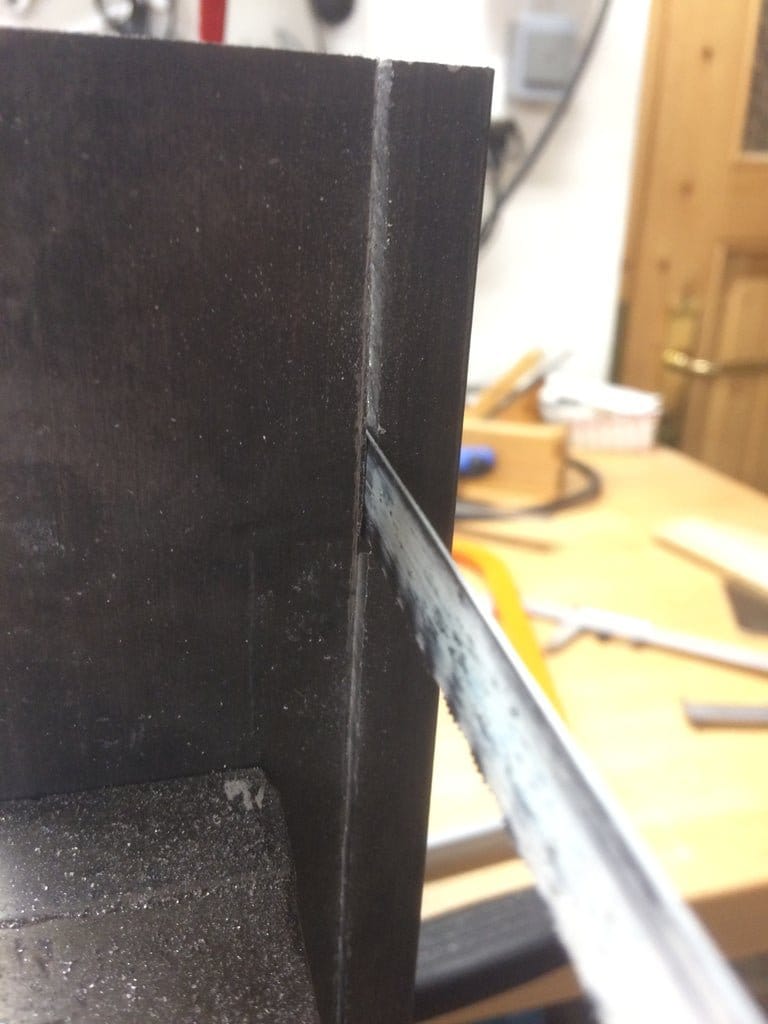 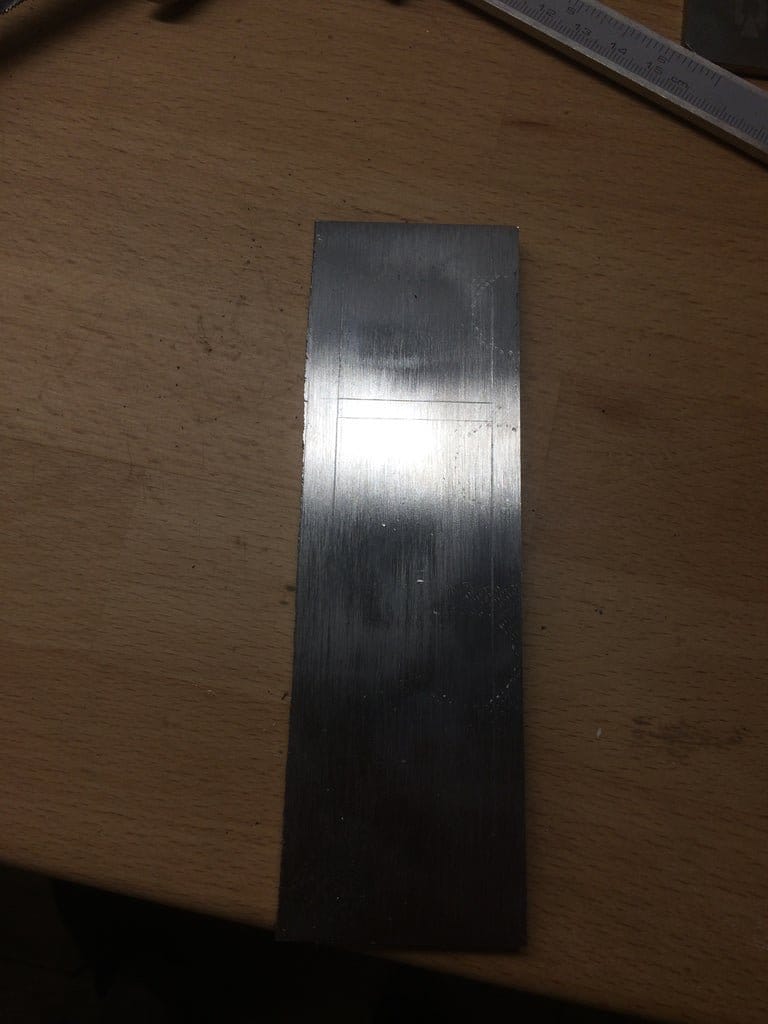 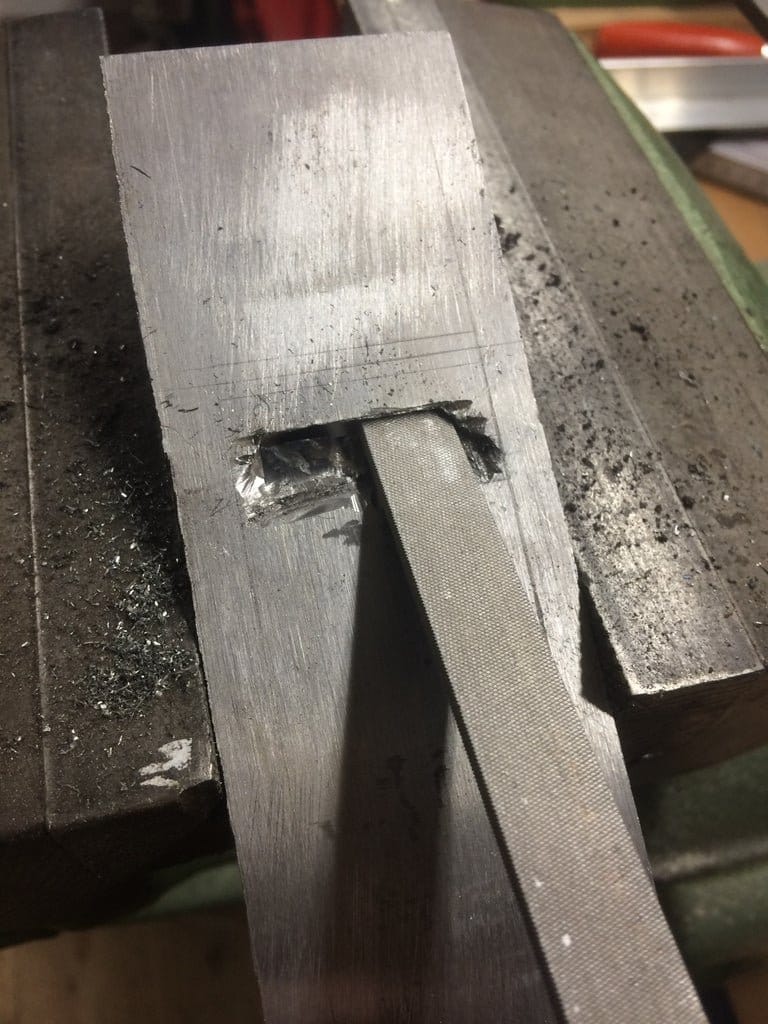 Next, the author began making a support for the blade and the block opposite to it. To do this, he used a timber of a suitable width (he does not know what kind of wood it is, either plum or cherry). First, I cut the workpiece to the desired width, then I drew the outlines of the parts on it and cut them out. The workpiece, which will serve as a support for the blade, has a bevel of 20 degrees (as well as one wall in the groove of the sole). After the parts were cut out, the author polished them, controlling the angle. 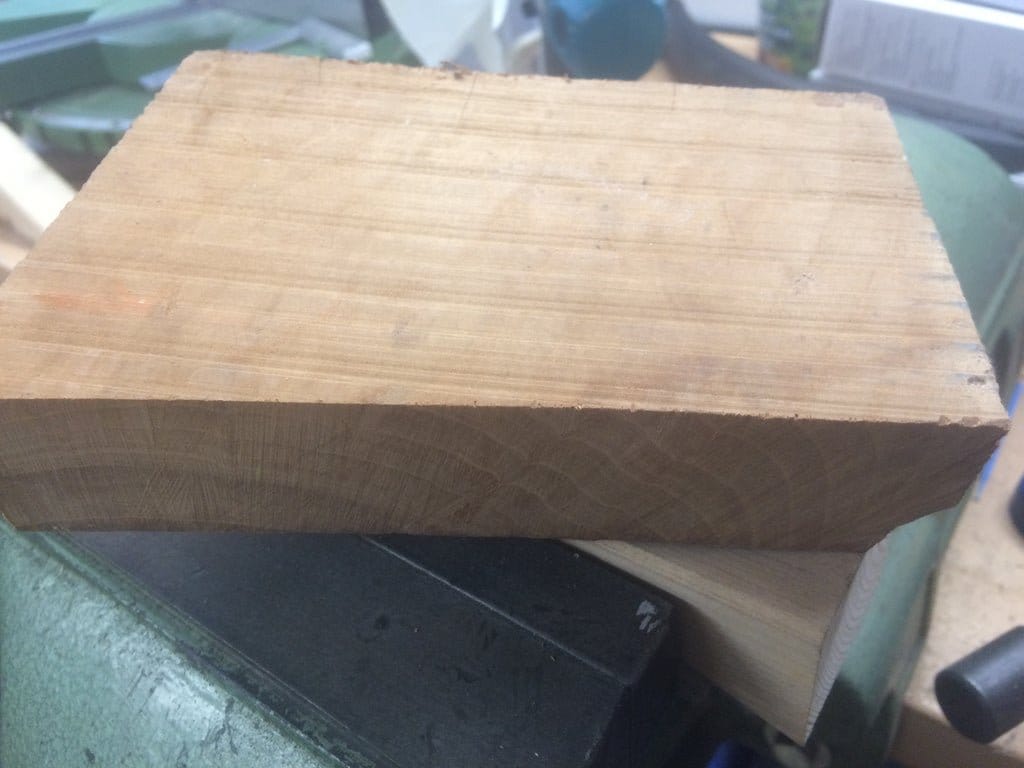 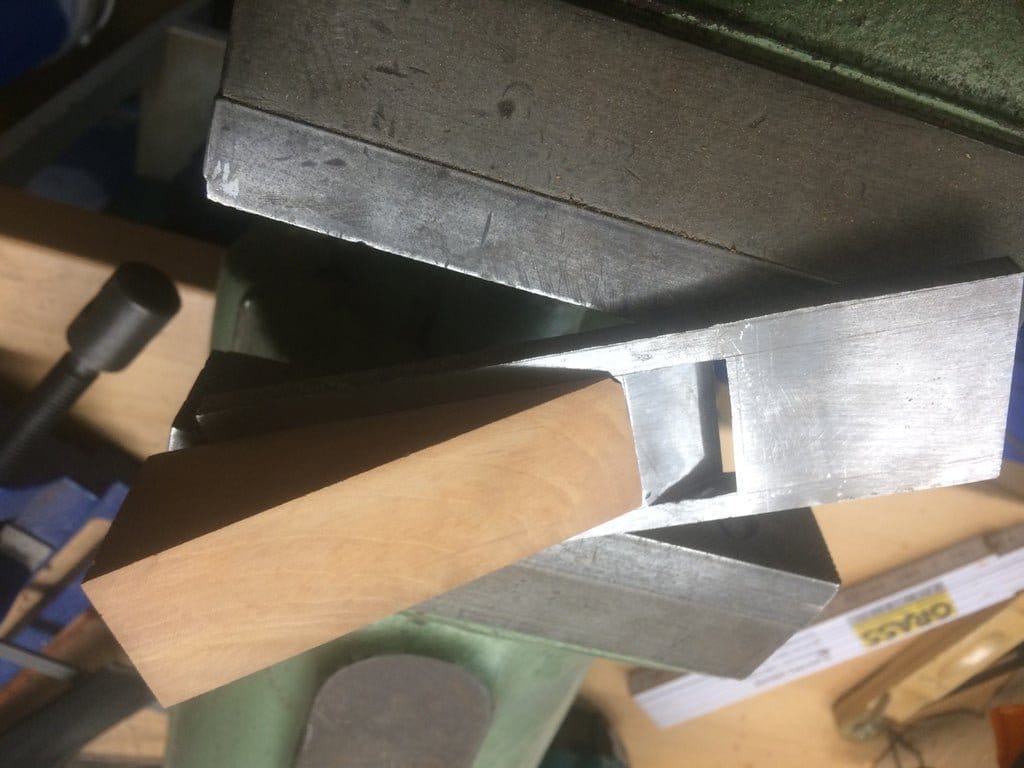 At this stage, he started assembling the tool. He attached all the wooden parts to the metal base using epoxy resin. Until its complete solidification (setting), the parts were fixed in clamps (clamps). Also in the last photo you can see that the upper blade clamp is already installed – a wooden wedge with a threaded pin and nut. There is no description of its manufacture. Apparently the second missed this moment. I hope you figure out how to make it. 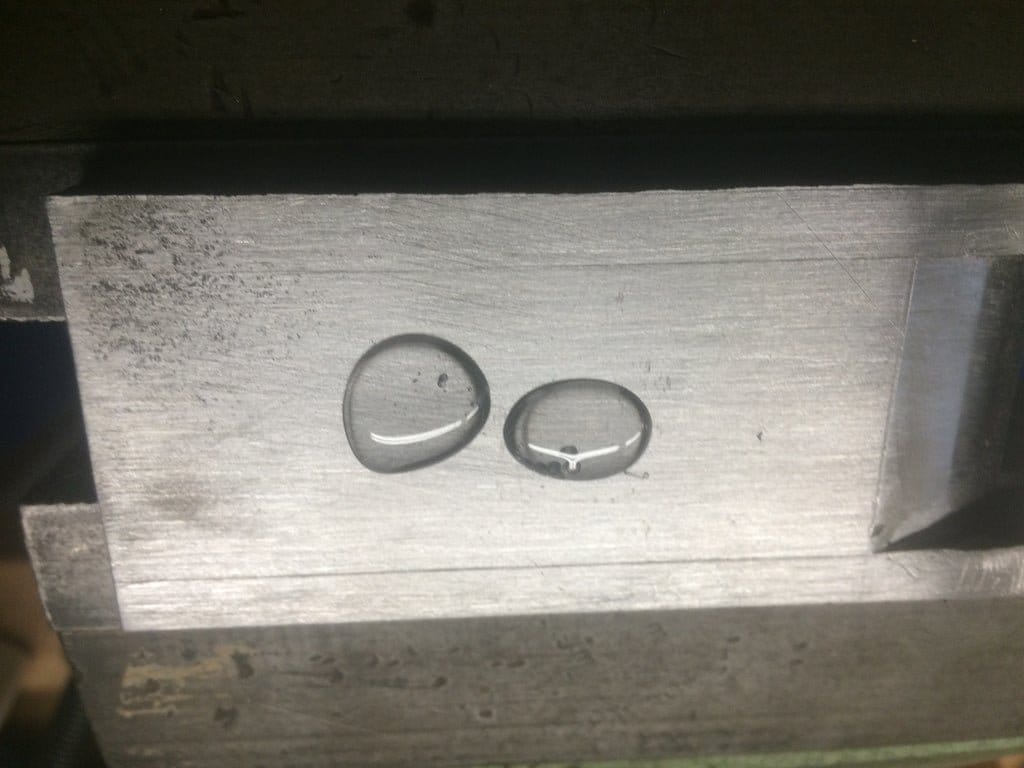 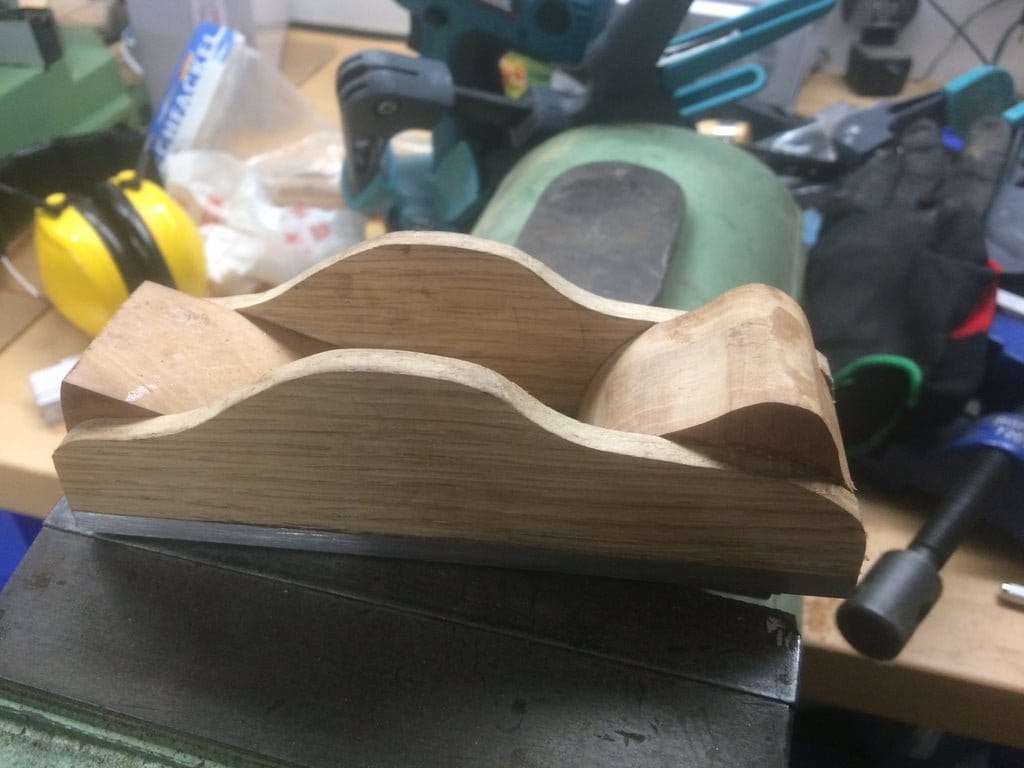 When the tool was assembled, I completed the final grinding of the outer side and end sides. He aligned the planes so that the wooden parts were flush with the metal edges of the sole. For processing I used a grinding machine and belts with grit 60 and 120. There is no photo of the process, but everything is clear here.

At this stage I made from steel strip 3 mm thick additional clamp. First, he marked and cut out a workpiece of the required size along the contour. Then I drilled a hole in a tender place and cut a thread in it for a pin. 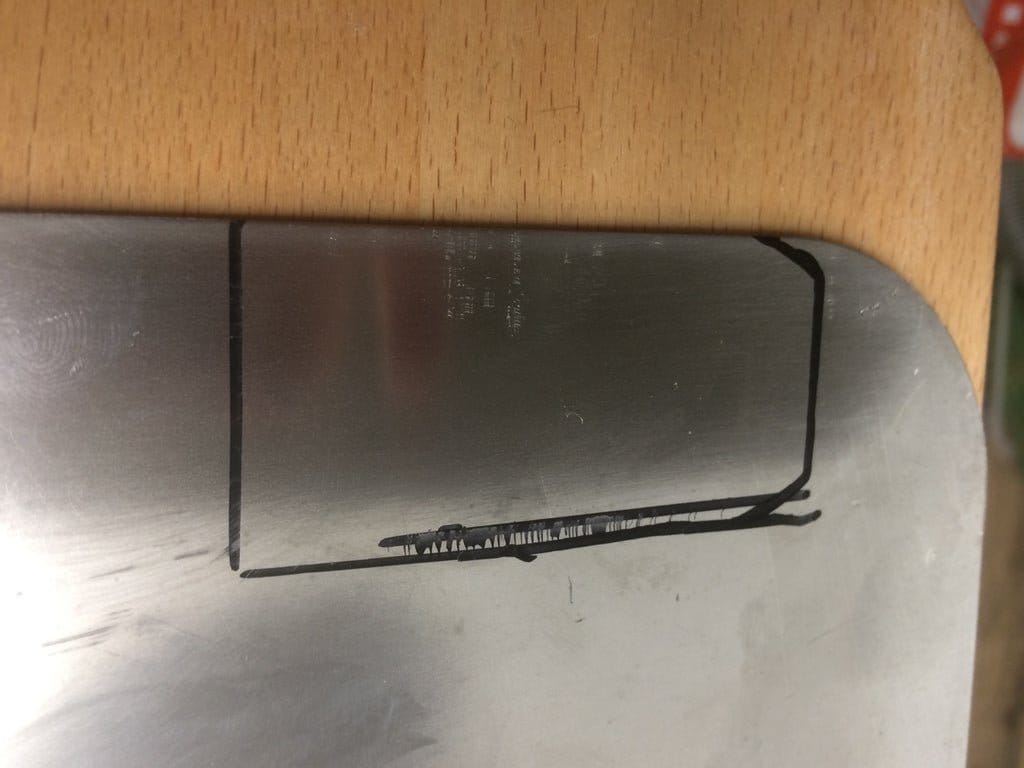 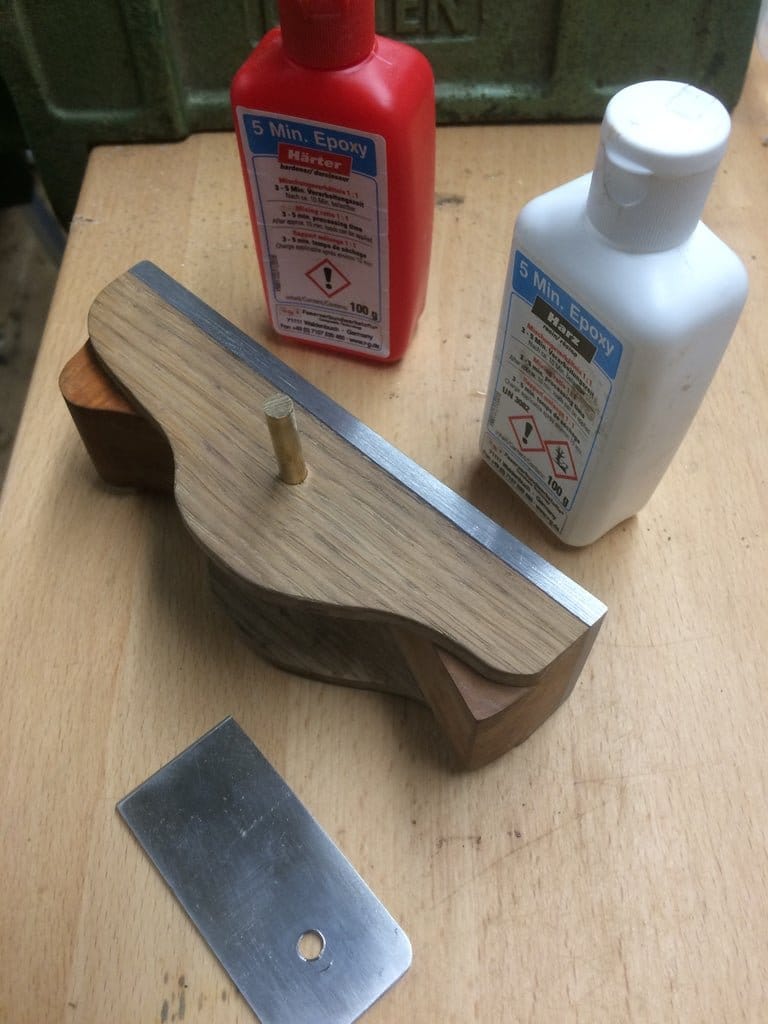 Next, I drilled holes for a brass pin (it was demonstrated in the last photo in step 5) and serves as an additional lock for the previously made clamp. The pin in the holes was fixed using the same epoxy resin.

At this stage, I began to level the sole. Used a belt sander again for rough finish and metal sandpaper on granite stone for finishing. There is no need to rush here, since it is not possible to process the detail with a planer with a curved sole. The author painted the sole of the planer with a permanent marker and then sanded it down. It's so easy to see where there is too much material. From time to time he checked the surface to be treated with a ruler for flatness and a square for squareness.
< img class = "aligncenter" alt = "Small one-handed plane" src = "https://usamodelkina.ru/uploads/posts/2021-02/1613829062_37.jpg"/> 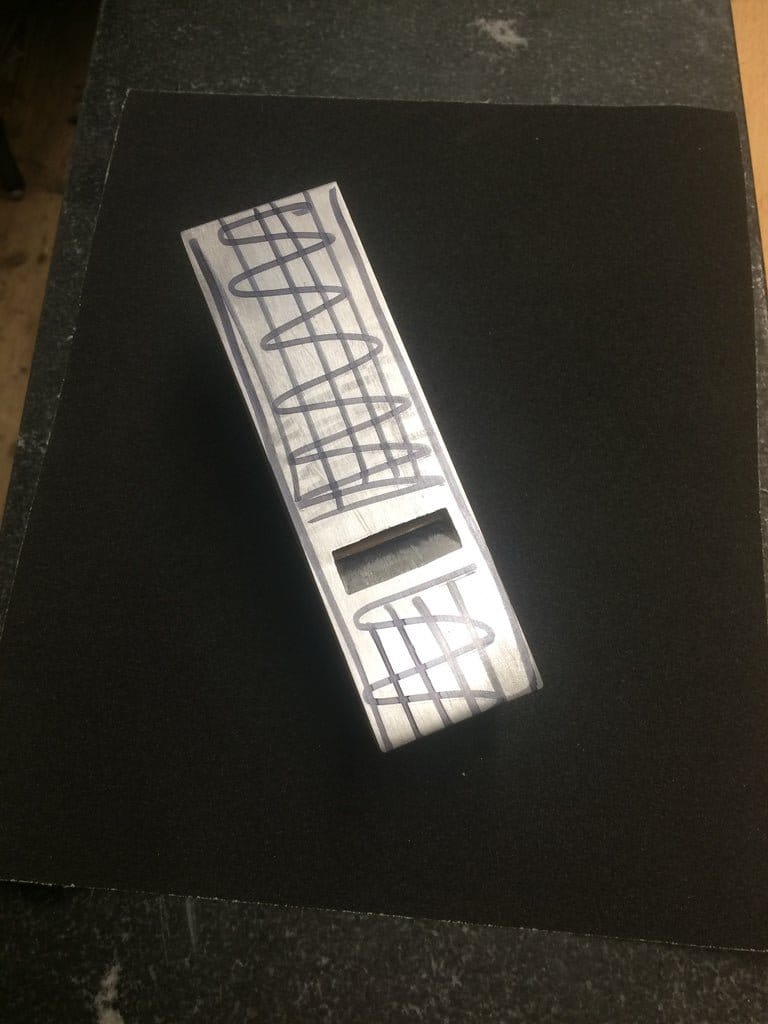 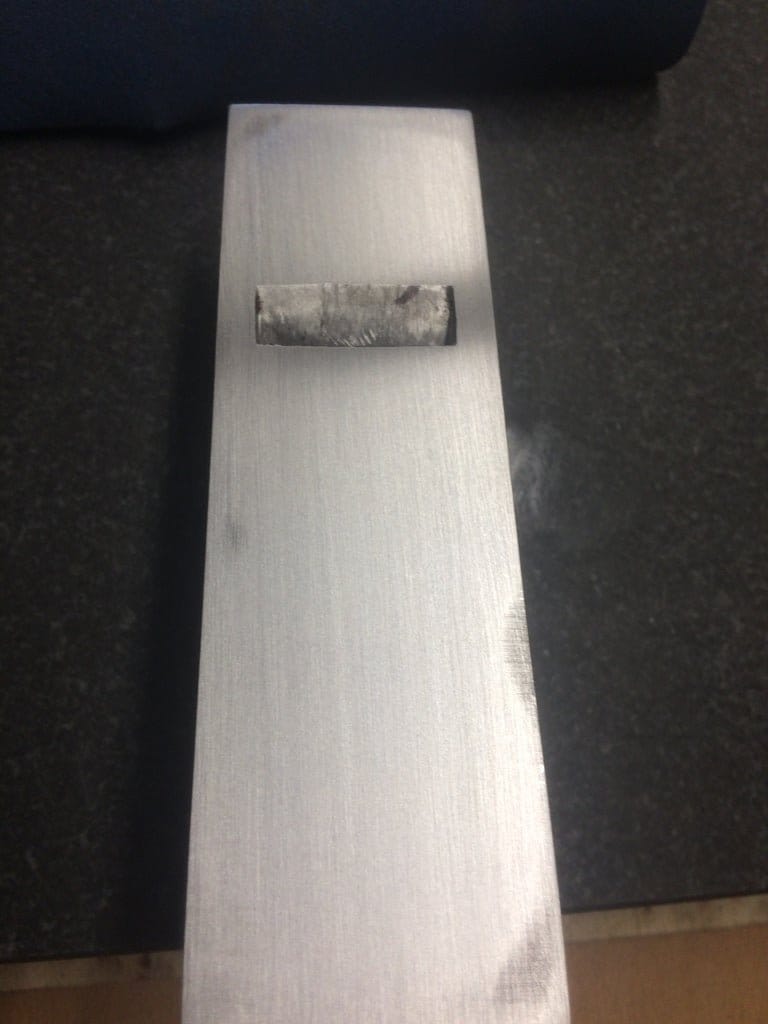 Since he drilled the groove, not cut it out, it turned out to be too large, and this, according to the author, can lead to poor-quality processing. He cites several figures as proof. To reduce the “window” for the blade, I made an insert from a bar. I picked up the bar of the required thickness, inserted it into the groove from above so that it protruded slightly from the bottom, cut off the excess without removing, so that the cut was at the desired angle. Then I sanded the part. 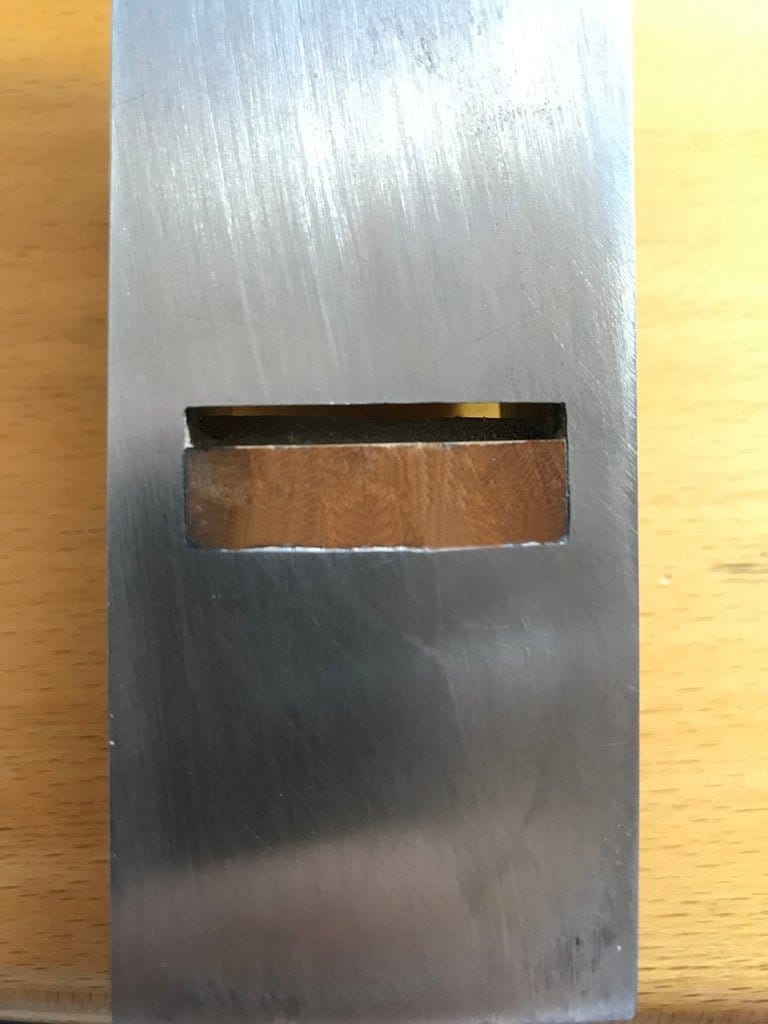 At the final stage, the author covered his “creation” with varnish. 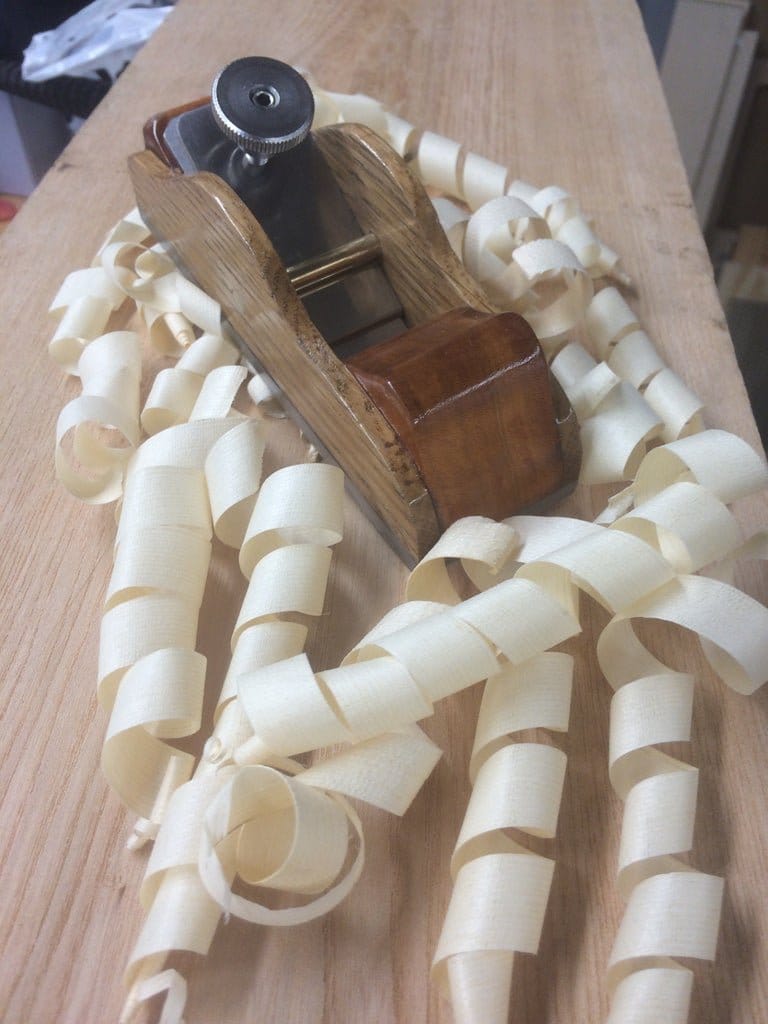 That's all … To everyone who read to the end, thank you for your attention. Until next time visiting Samodelkin !!!