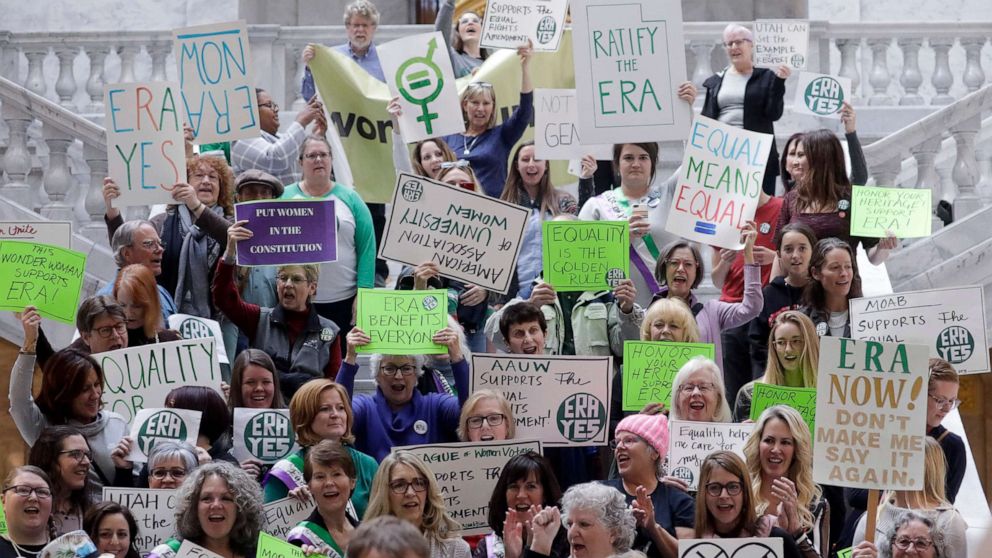 The near century-old movement to enact an Equal Rights Amendment to the U.S. Constitution is once again experiencing a revival, with advocates touting 2021 as the best opportunity in a generation to move the measure from political purgatory to reality.

A record number of women serve in Congress; America has its first-ever woman vice president; Democrats hold political power in Washington; and the coronavirus pandemic has galvanized awareness of racial and gender inequality in employment and pay.

“We do have momentum in a way that we haven’t had probably for decades,” said Rep. Jackie Speier, D-Calif., who is leading a legislative effort to finalize the ERA. “This momentum really started in 2017 and it has grown and it’s time. There is no deadline on equality and it’s about time we recognize it.”

The language of the amendment is straightforward but far-reaching, stating that: “Equality of rights under the law shall not be denied or abridged by the United States or by any State on account of sex.”

Advocates said those words could be primed to finally become law as the 28th Amendment at a critical time.

Women in the U.S., on average, still earn less for the same work — just 82 cents for every dollar earned by men, according to U.S. Census Bureau data. The gap is even wider for women of color.

Many women are dropping out of the workforce altogether.

More than 2.3 million women have taken themselves out of the job market since the pandemic recession began, including another 275,000 just last month, according to an analysis of Labor Department data by the National Women’s Law Center. January marked the lowest labor force participation rate for women in more than 30 years. Some have called the nation’s latest economic downturn a “she-cession.”

Economists say the situation is threatening to make the gender pay gap even worse.

“Their male counterparts are moving up in the ladder at work and they’re moving down,” said California state assembly member Buffy Wicks, who became a symbol of the crisis last fall when she was forced to take her infant daughter to the statehouse floor in order to do her job.

“And then they’re going to have to reenter the workforce and they’re going to be this far behind. That pay inequity will increase again over time,” Wicks said. “If we enshrined the ERA to the Constitution, that guarantees equality and equality for women across the country.”

Advocates argue the amendment would give a constitutional basis for women to fight back against pay inequality and other forms of discrimination.

“I was started off with a very good salary, and the problem though is that that salary level did not keep up,” said Deepa Kumar, a professor of journalism and media studies at Rutgers University, who described herself as a victim of gender pay discrimination. “It has not been an easy struggle, not only because it’s emotionally burdensome, but it’s also because it’s so difficult to actually win this kind of justice.”

She was hired at Rutgers in 2004, the same school where in 1969 a young law professor, Ruth Bader Ginsburg, won a settlement over unequal pay for female faculty. Kumar and four other women professors sued the school again last year.

Rutgers would not comment on Kumar’s case, but told ABC News in a statement that it is creating a new pay equity program and is “committed to resolving outstanding pay equity requests as quickly and responsibly as possible.”

“I think it’s very important, you know, to actually have a law that allows women to challenge the injustice and the discrimination that they’re facing so that, you know it’s equal pay for equal work for all,” Kumar said of the ERA.

“In 30 of the 50 states, menstrual products are not exempt from sales tax because they’re not deemed necessities,” said Jennifer Weiss-Wolf, author of “Periods Gone Public” and attorney at the Brennan Center for Justice.

The so-called “tampon tax” has been banned by nearly a dozen other countries but it’s persistence in the U.S. is still surprising to many.

“I have to tell you, I have no idea why states would tax these as luxury items. I suspect it’s because men were making the laws when those laws were passed,” he told YouTube star Ingrid Nilsen in an interview.

“Most people, when they hear that, it forces almost anyone to go, ‘I never thought about that. Why is that? Who decided that?'” Weiss-Wolf said. “It’s great and amazing the progress that’s been made over the past decades, even when the ERA did not cross the finish line, but it is time for permanence.”

The Equal Rights Amendment passed Congress in 1972 by overwhelming bipartisan majorities. Dozens of states quickly ratified it in turn; yet for years, the amendment was three states short of the required 38 needed to make it official.

“Congress, in its infinite wisdom, decided to put a deadline on passing it; very paternalistic,” Speier said.

That deadline, initially 1979 but extended to 1982, was never met after activist Phyllis Schlafly mobilized a movement of conservative women in opposition. She warned the ERA would upend American society, leading to women drafted into the military, an end to restrictions on abortion and the elimination of gender designations for bathrooms.

It wasn’t until last year that Virginia became the final state to meet the required three-fourths majority to finalize the addition to the nation’s Constitution. Several states have subsequently voted to rescind prior ratifications, though the practical impact of those moves has been debated by legal scholars.

ERA advocates concede that ratification alone won’t mean an immediate end to gender discrimination nationwide, but they argue that it will make it easier for women to bring legal challenges backed by the full force of the Constitution.

“There has been discrimination — it’s around pay, it’s around pregnancy and it’s around violence against women. So those are the areas that will be impacted,” said Speier.

The Biden administration said enacting the ERA is a centerpiece of its “Agenda for Women.” Vice President Kamala Harris has said that the measure is a priority of her first 100 days in office.

Speier said more than 200 lawmakers from both parties have co-sponsored her bill to remove the deadline for the ERA ratification and allow it to become law.

“The legislation is quite simple. It just strikes the deadline in the preamble of the amendment,” Speier said.

A U.S. Justice Department analysis last year concluded that “Congress may not revive a proposed amendment after the deadline has expired.”

Even Supreme Court Justice Ginsburg conceded before her death that the process would need to start over.

“The ERA fell three states short of ratification. I hope someday it will be put back in the political hopper, starting over again, collecting the necessary number of states to ratify it,” Ginsburg told law students at Georgetown University in 2019.

Some constitutional scholars argue that legal analysis is flawed.

“We have intractable problems that can only be solved by fixing the Constitution and really declaring that you cannot discriminate based on sex — and that’s all that this amendment says,” said Carol Jenkins, president and CEO of the ERA Coalition. “We’ve been working on it for 100 years.”

Energized by a wave of activism stemming from the MeToo and Time’sUp movements, Jenkins and an army of loyal ERA activists said the time has come to get the amendment finally into law.

“It’s time to bring this over to the finish line,” said Weiss-Wolf. “I think this is the moment it’s going to happen.”