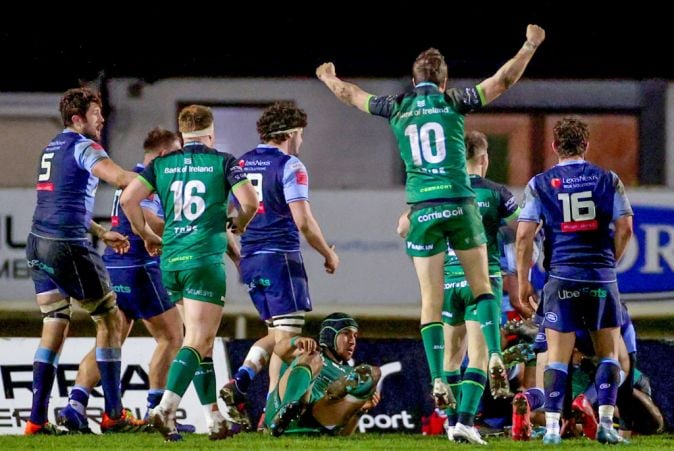 Connacht ended a run of three successive Guinness PRO14 home defeats with a 32-17 bonus point win over Cardiff Blues at the Sportsground.

Corey Domachowski became the second Cardiff prop to touch down in the 64th minute, but Connacht captain Jarrad Butler and replacement Abraham Papali’i sewed up the result with final-quarter tries.

Cardiff controlled the early possession and Lloyd Williams’ snipe and a forward-looking pass set up Aled Summerhill for a massive surge downfield.

The hosts leaked a penalty close to their own line, and after a 10th-minute maul drew the Blues closer, Carre was well supported by Liam Belcher as he drove over for Jason Tovey to convert.

A Jack Carty penalty opened Connacht’s account soon after, and he landed a second kick in the 21st minute to make it a one-point game.

Connacht had blown an overlap before that, though, and Cardiff hit back through Tovey’s right boot for a 10-6 lead, following a no-clear release penalty against Dave Heffernan.

However, winger Wootton’s six minutes of magic before the interval really lifted Connacht. He surged in between Mason Grady and Belcher, past the visitors’ 10-metre line, and evaded Matthew Morgan’s tackle to finish to the left of the posts.

With the clock in the red, the 26-year-old showed great feet again to score at the end of 16 phases and stun what had been a reliable Blues defence for the opening 35 minutes.

Carty tagged on both conversions for a 14-point swing, and after Tovey hit the post with an early second-half penalty, Connacht had the better of the play up to the hour mark.

They turned down a kickable penalty but emerged scoreless, and their own indiscipline allowed the Blues to bite back.

Ellis Jenkins increased his influence at the breakdown before replacement Domachowski burrowed over.

Full-back Morgan’s conversion made it 20-17, but it was then Cardiff’s turn to fall foul of referee Andrew Brace’s whistle. It gave Connacht prime maul position and Butler was quickly bundled over for an unconverted score.

A unlikely bonus point was the westerners’ reward late on, with big back rower Papali’i – backed up by Ultan Dillane – powering over in the 77th minute for his third try in five appearances.