In this article, the wizard will tell us how to create a budget rotating LiDAR sensor based on Arduino. Its diameter is only 30 mm. It uses two diametrically opposed sensors. This solution doubles the scan speed. All body parts are 3D printed.
But first, let's briefly understand what LiDAR is.
LIDAR stands for “Light Identification Detection and Ranging” – or a system for light identification, detection and ranging. The difference between lidar and radar is that instead of microwave radio waves, as in radar, waves of the optical range are used here. Using this technology, optical rangefinders and unmanned vehicles are made, they are installed on UAVs and meteorological installations. Lidars are not afraid of exposure to sunlight, and their reaction speed is higher than that of ultrasonic sensors.
Tools and materials:
Tower
-Two laser distance sensors VL53L0X TOF; -MT3608 upconverter; -MX1508 DC motor driver module; -8-pin connector; -N20 6V 60 rpm motor; -6-wire contact rotary ring;
-M2 screw , 5×12 + nut M2,5;
Base station
-Arduino uno; -USB-cable; -5V 1A adapter; -8-pin connector; -Pin connector;
-4 screws M3x12 + 4 nuts M3;
Other materials
-Lead-free solder; -Thermal shrinkage;
-Insulating tape;
-Glue;
-3D-printer;
-Computer;
-Screwdriver; < br> -Soldering iron; -A tool for stripping wires;
-Side cutters;
-Knife;
-File;
Step one: design
The main tasks in the manufacture of the device were: < br> Low cost – the total cost of components should be as low as possible.
Minimum size – focus on keeping the size as small as possible.
Performance – nearly 360 ° coverage and fast scanning speed.
The device uses widely available components.
The master already had experience in making similar devices, ultrasonic (HC-SR04) and IR, but without rotation. Commercially available rotary LiDAR sensors are quite expensive, so he wanted to try to develop a sensor with minimal cost. If successful, he planned to use this sensor to navigate small robots. The VL53L0X sensors, which was chosen for this device, have a wavelength of 940 nm, invisible to the human eye, but captured by the smartphone's camera.
The main body parts are 3D-printed. The material for printing is PLA filament.
The master uses a special rotary ring to implement the sensor rotation function. 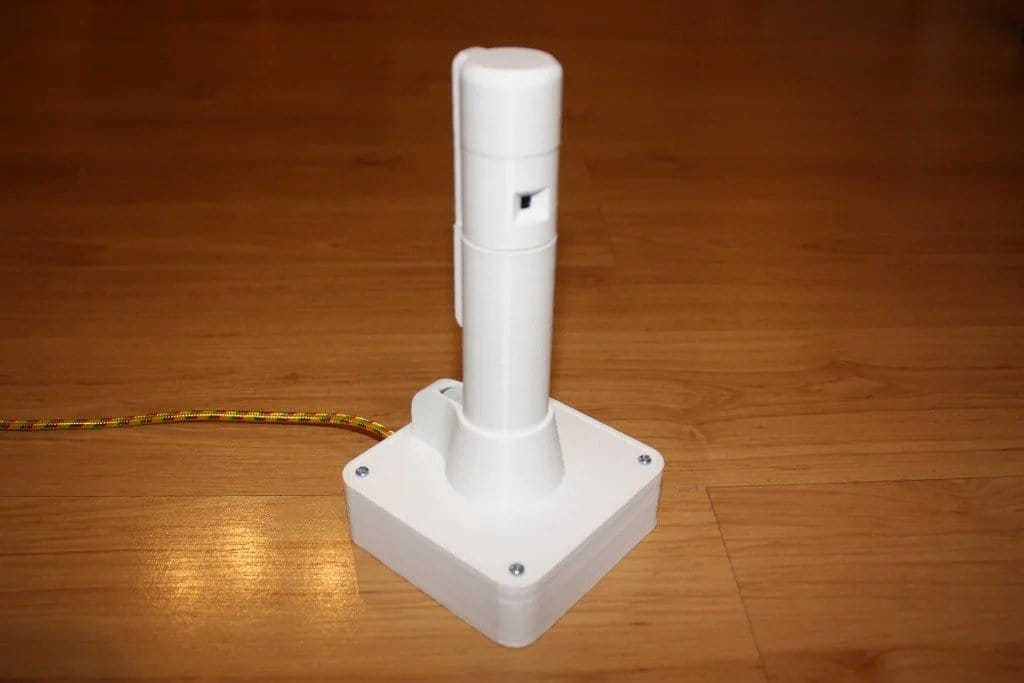 Step two: 3D printing
All files for printing can be downloaded from this link. The link contains .stl files ready to be exported to a program for printing, as well as .step files. Files with the .step extension are needed if the user wants to change the design of the case.
The main unit only needs 4 printed parts. They must be printed in the orientation shown. The quality should be as high as possible. The master used a layer height of 0.1 mm and a very slow print speed.
After printing, you need to process the parts by removing and sanding the beads and irregularities. After assembly, most of the components loose a little, this is done on purpose. The craftsman uses pieces of masking tape and duct tape to create a snug fit. 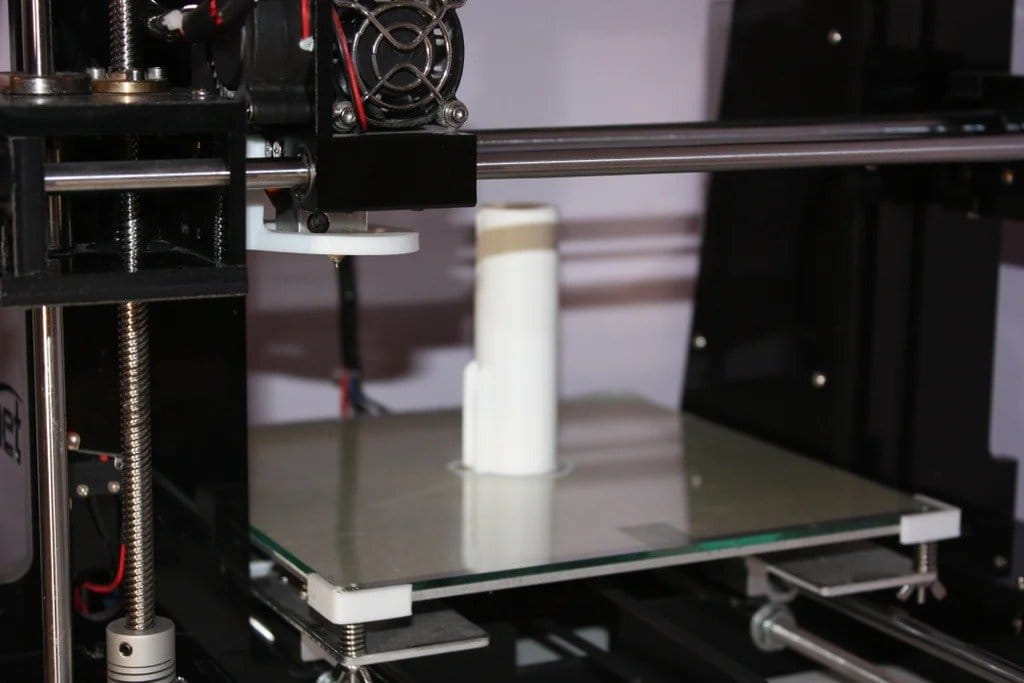 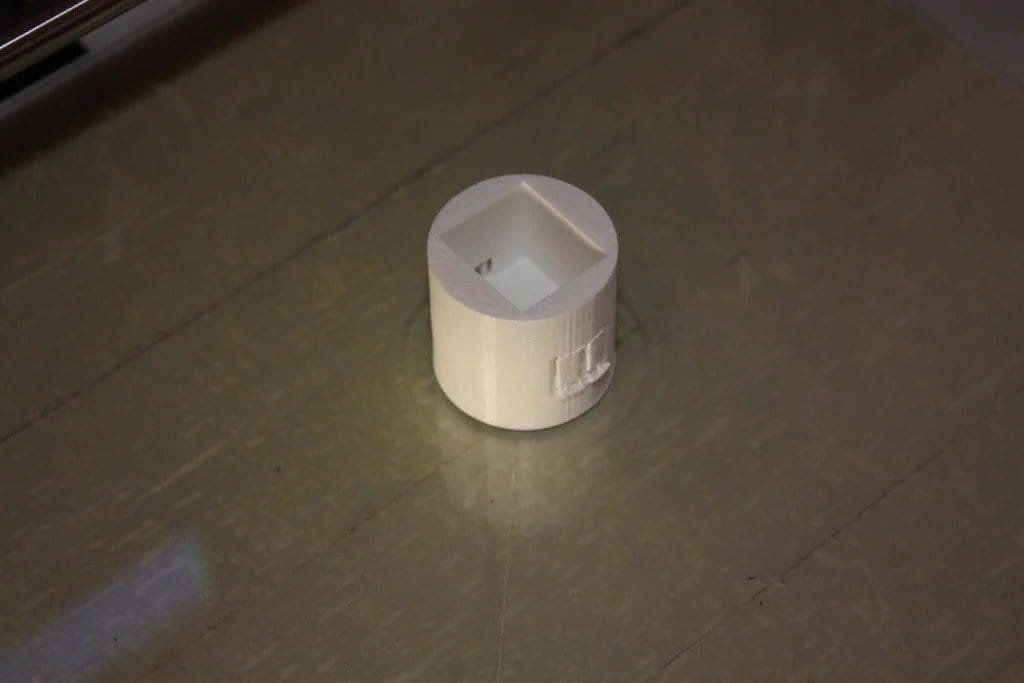 Step Three: Installation
The circuit consists of two parts – the sensor assembly and the base part. An 8-pin connector provides communication between them.
The wires are pulled through a narrow channel connecting the top and bottom of the case. Then they need to be connected to the slip ring wires. The wires must be ringed and marked.
Then install the slip ring in the cover and glue it on. The bottom half of the slip ring should rotate easily. 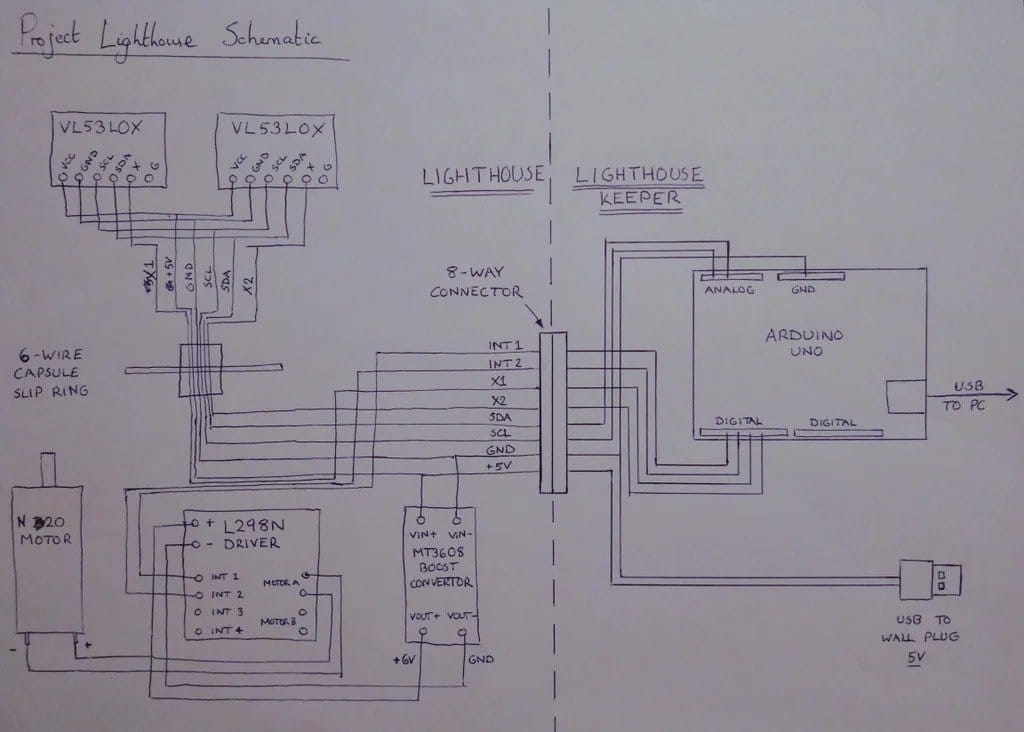 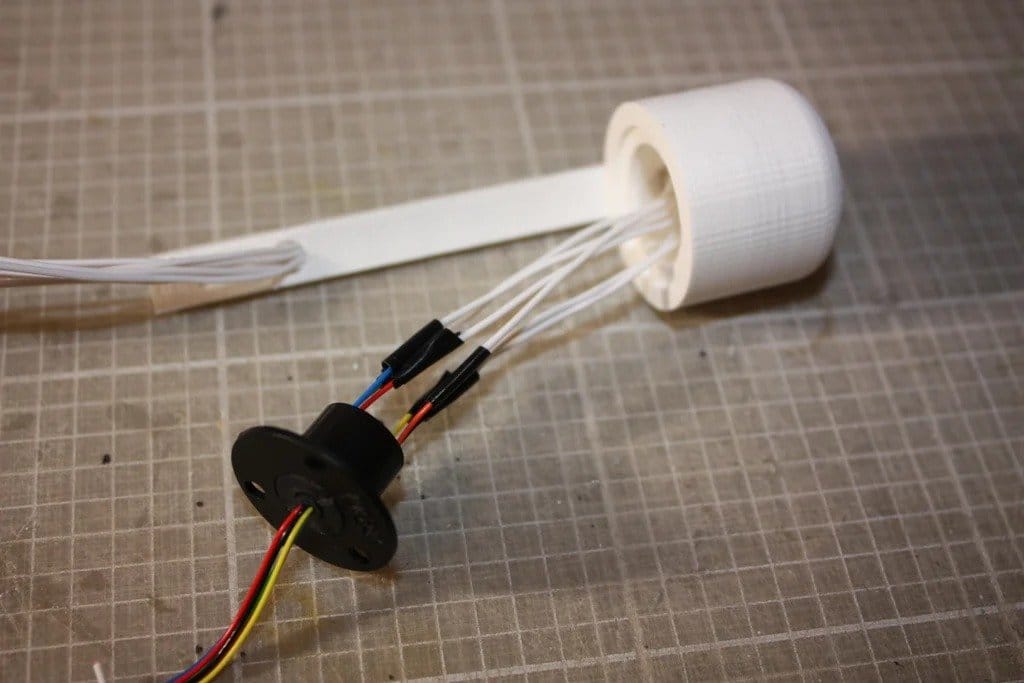 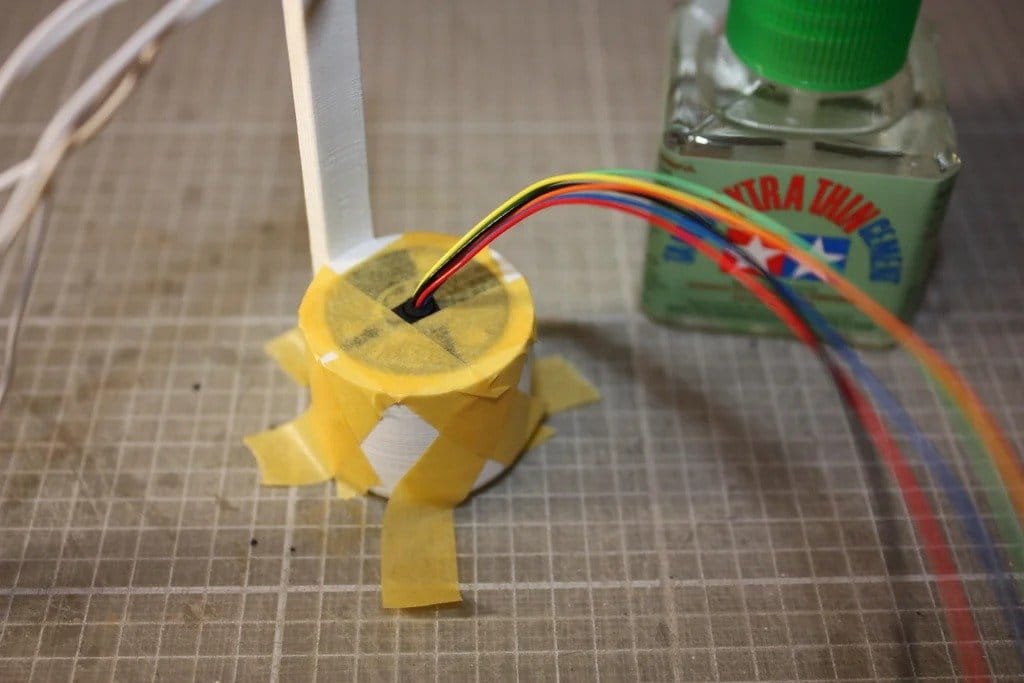 Step four: assembling the lower part
Solder a pair of wires to the motor pads. Install it in the motor holder inside the printed part of the 'carriage.
Install the MX1508 board. If the fit is loose, add masking tape or duct tape. Remove the board again. Cut the motor wires to the correct length and solder them to the “Motor A” pins. Solder two 10cm wires to IN1 and IN2 pins that will be used to control the motor drive. Reinstall the board.
Next, you need to install a step-up module. Before installing the module, connect to VIN + and VIN- pins from the adapter 5 V. Adjust the output voltage on the board to 6 V. Disconnect the adapter. Now attach the pieces to the VIN + and VIN- pins, and the VOUT + and VOUT- pins to the + and – pins of the motor driver board.
Install the connector and connect the wires according to the diagram. 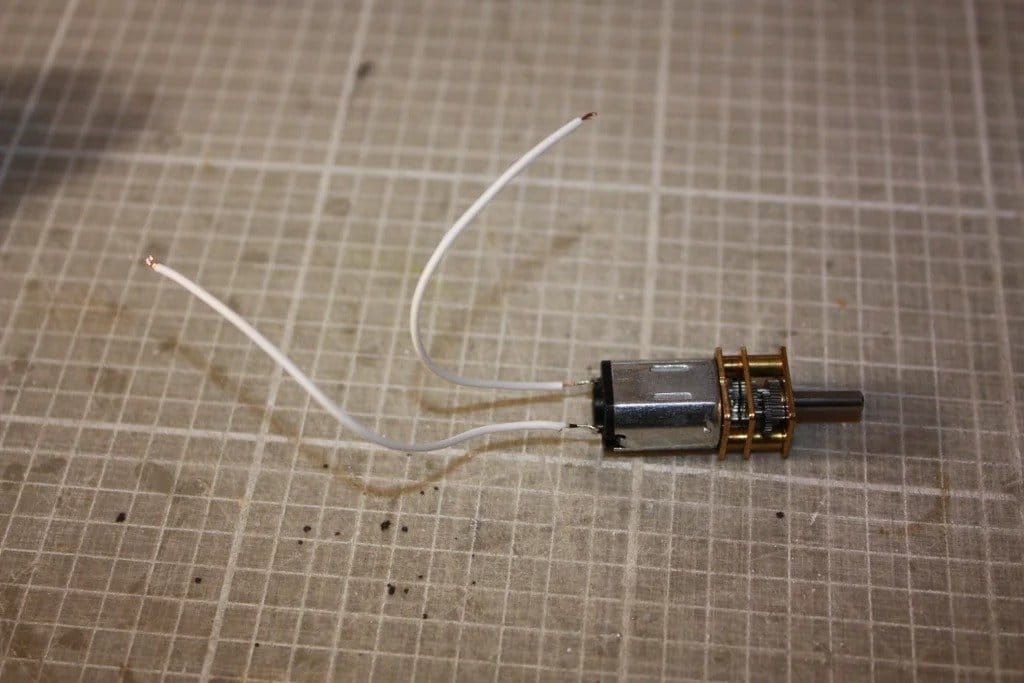 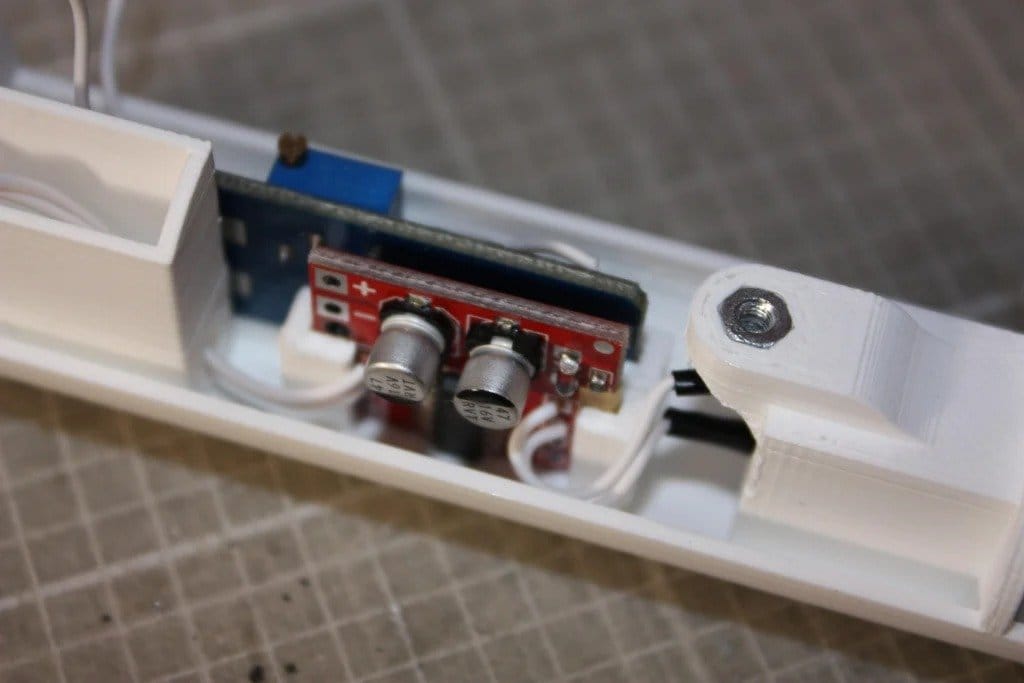 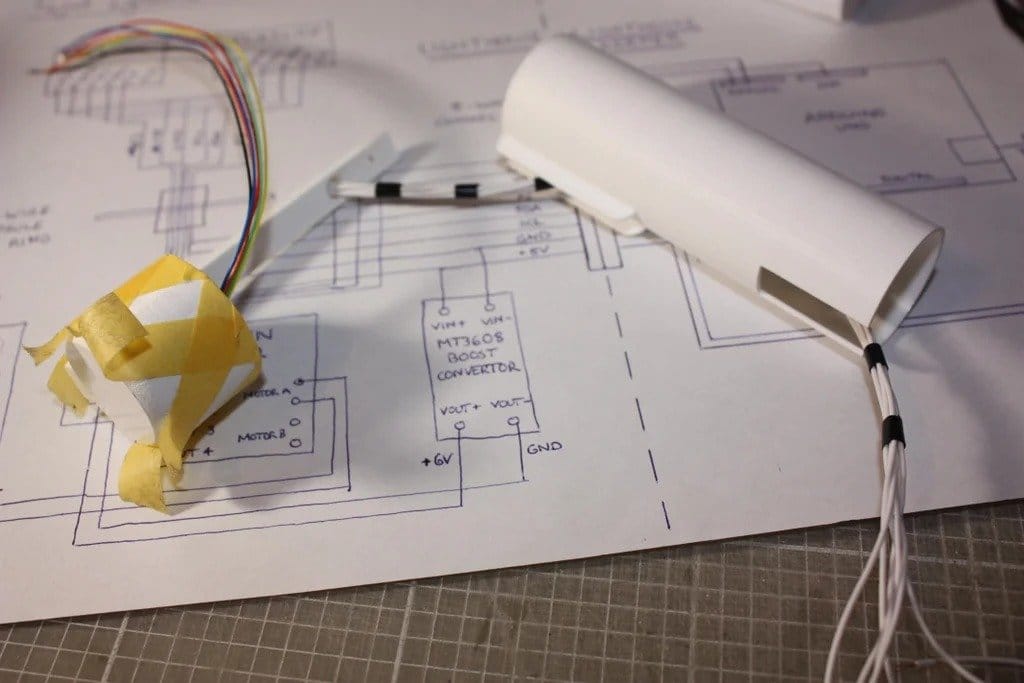 Step five: installing sensors
Solder short pieces of wire to VIN, GND, SDL, SCA and X pins of each VL53L0X board. The wires are soldered on the opposite side of the sensor itself.
Each VL53L0X sensor has 5 wires connected for a total of 10 – however the slip-ring interface they must pass through has only 6 wires.
VIN (5 V), GND, SDA and SCL pins are common on the boards. Connect these wires between the two boards and then solder each one to one of the slip ring wires. Each “X” wire from each VL53L0X must be connected to a separate slip ring wire.
Slide both VL53L0X modules into place, and then carefully pack the protruding wires into the space between the two boards.
Connect the two parts of the device. 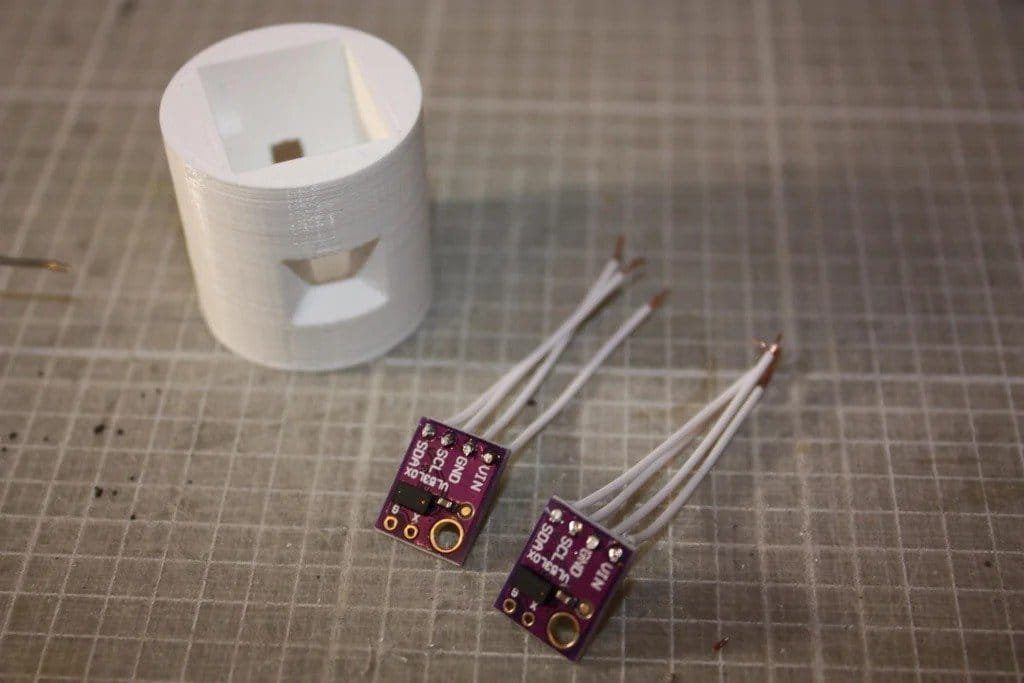 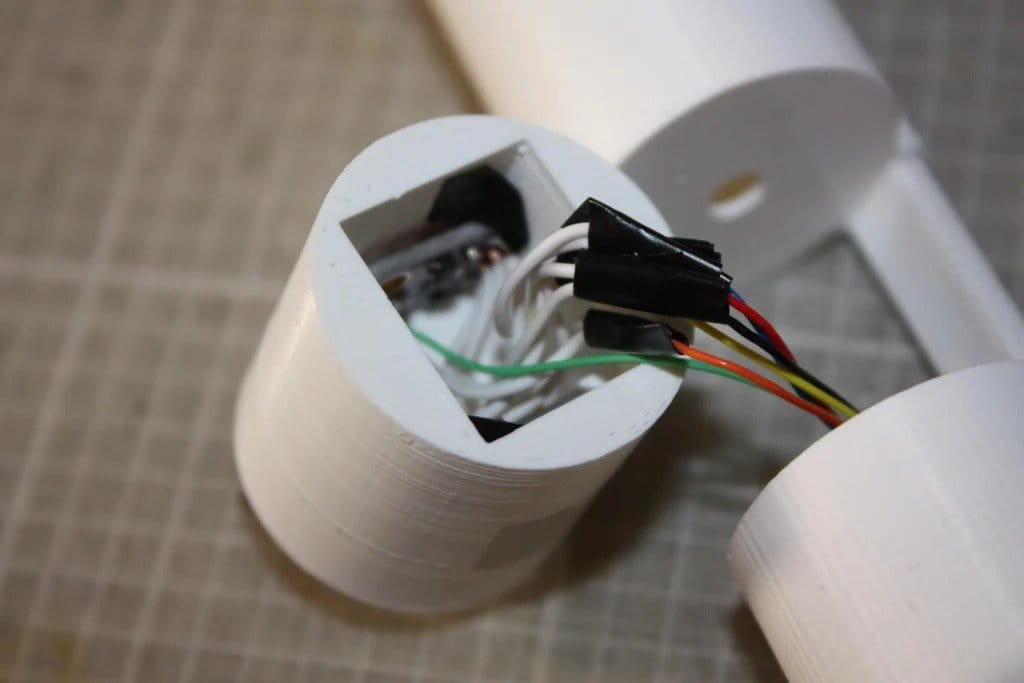 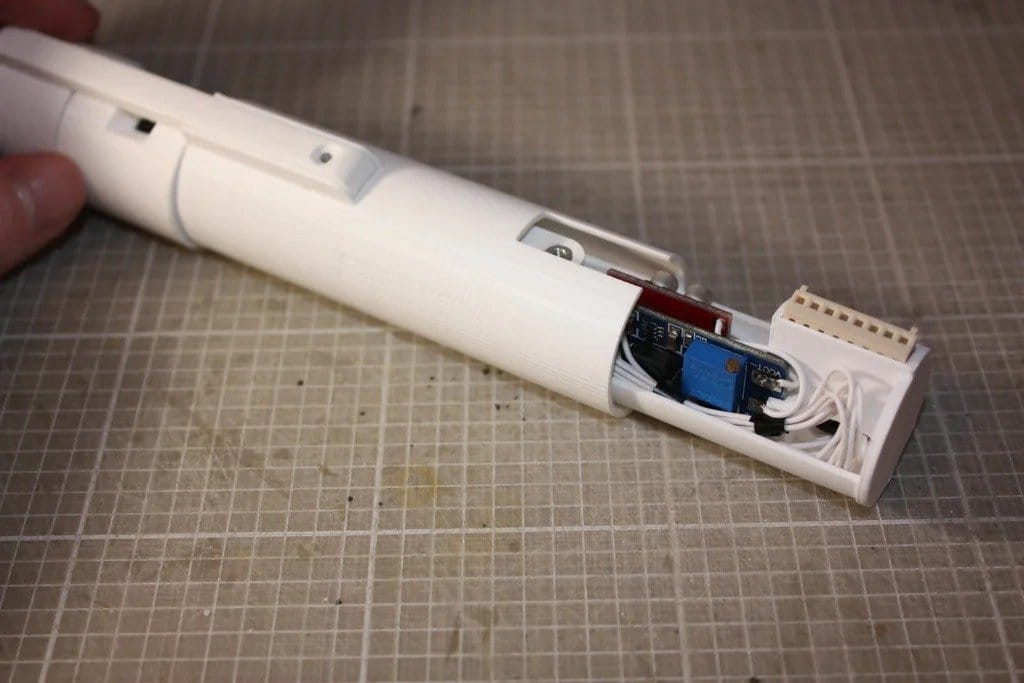 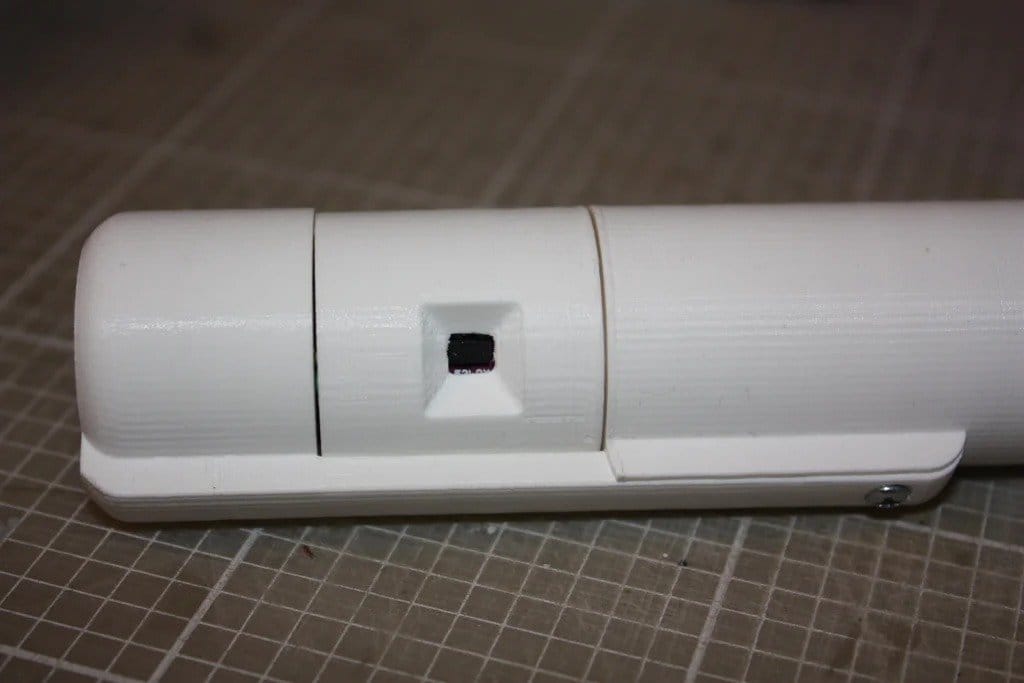 Step six: base
LiDAR is designed to be mounted on a small robot, but for testing, the master has constructed a base. The base mounts an Arduino Uno, a 5V power supply connector, and an 8-pin rack connector.
The body consists of two parts: a base and a cover, which are connected by 4 screws and nuts M3x12.
For power, the master uses a 1m USB cable connected to a 5V, 1A adapter. Cut this wire and connect the red wire to 5V and the black to GND. The Arduino will draw power via USB from the PC, but it is important to connect the GND pin of the Arduino to the input ground line from the adapter.
Solder the rest of the wires to the connector and insulate them.
Then the connector plugs into the rack jack and the two parts of the device can be connected. 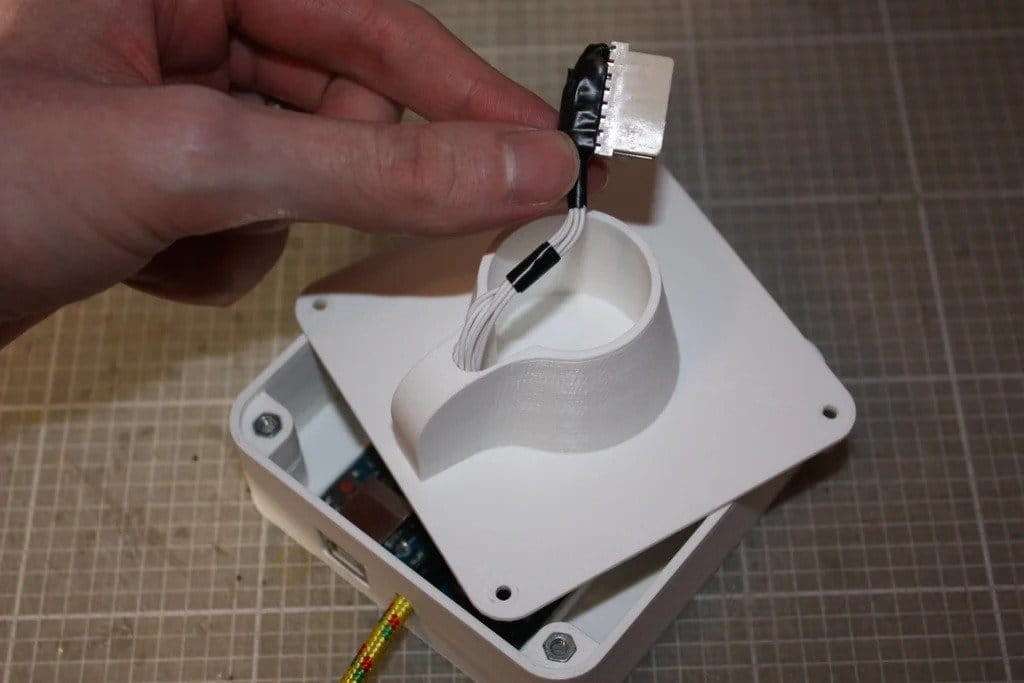 Step Seven: Programming
Next, you need to connect the device to your computer and download the code. For the device to work, you will also need the Adafruit_VL53L0X.h library and a processing program. Processing is an open source graphics library and it will be used to visually display LiDAR output on a computer screen.
Sketches are provided with annotations explaining all aspects of their work.
After installing the software, run the attached processing program and it will initialize a black rectangular full screen window with a small white circle in the center. The small circle represents the diameter of the sensor itself, and the large circle represents the maximum sensor range set/limited by the Arduino code.
The motor will start to rotate and rotate approximately 10 times. This is the calibration step in which the device measures the rotational speed and calculates how many readings are taken per revolution. This information is later used in data processing.
After the calibration is complete, small dots will appear on the screen to show where the LiDAR is detecting nearby objects.
Below you can download the code file and watch a video explaining some of the programming steps
LiDAR_v1.96.inoprocessing_lidar_v1_1.pde Step Eight: Testing
To test LiDAR, he put the device in a large box.
By placing small objects in the same box, you can see in the test results how the sensor was able to successfully determine the position of the object. For clarity, he overlaid images of the box over the results of the respective tests. 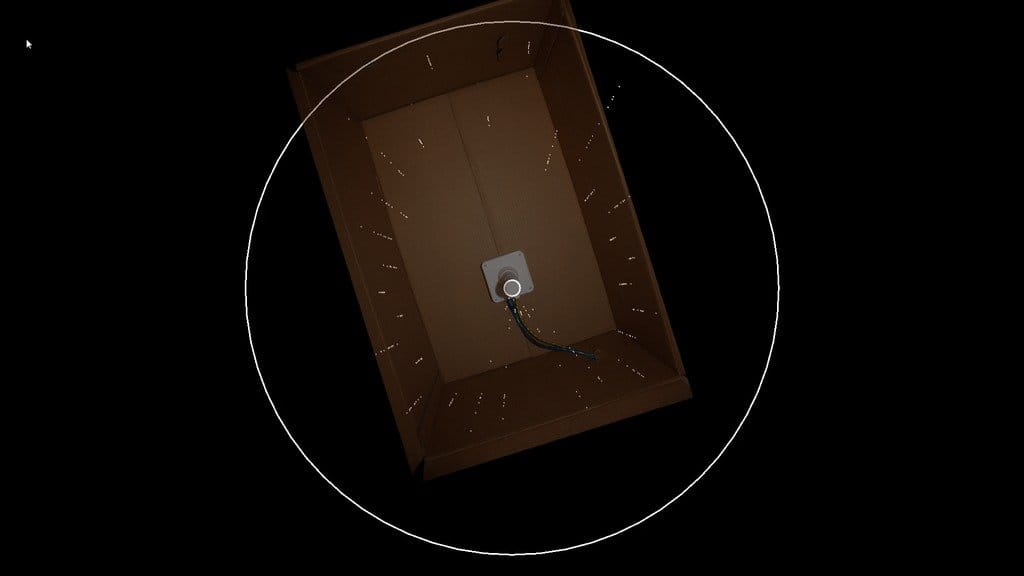 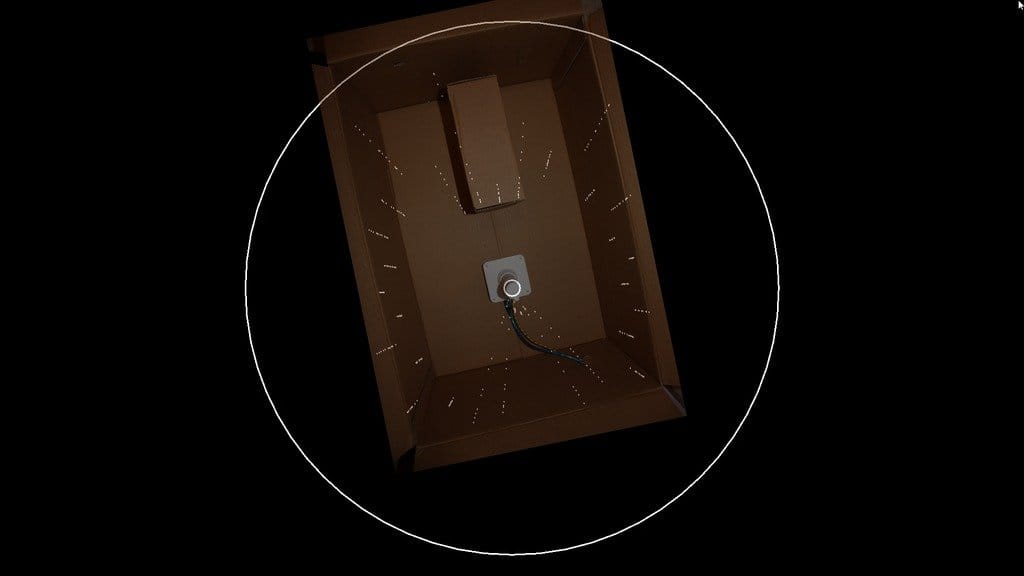 Step nine: summary
The master liked the work on the project, but there are some details that could be improved.
It is desirable to shorten the time interval required to read the sensor readings. Initially, the read cycle took over 100ms. After updating the code, it was possible to reduce this value to 57 ms, which allows you to write much more data per revolution. The master thinks that the further decrease in the interval is limited by the VL53L0X sensor, and not by the code. Perhaps installing another Arduino and assigning each sensor to “its” device will help.
He also thinks that a more complete picture of the environment could be created by adding a small time delay between recordings of each successive rotation. Such a scenario would cause the dataset of each rotation to shift by several degrees and, after several rotations, to “denser” data.
Demonstration of the device operation, as well as its manufacture, can be seen on the video .