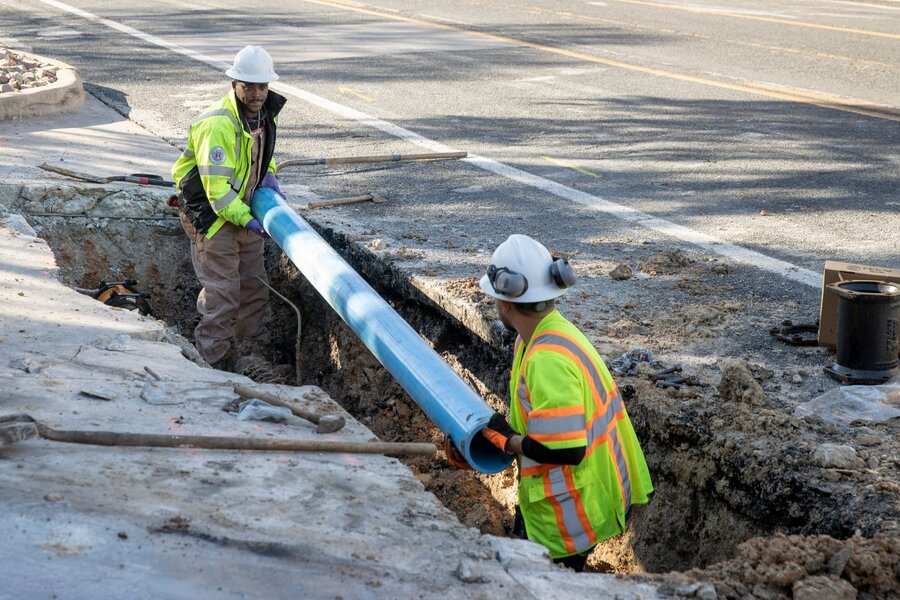 Higher temperatures spread across the southern United States this weekend, bringing relief to a winter-weary region that faces a challenging clean-up and expensive repairs from days of extreme cold and widespread power outages.

In hard-hit Texas, where millions were warned to boil tap water before drinking it, the warm-up was expected to last for several days. The thaw produced burst pipes throughout the region, adding to the list of woes from severe conditions that were blamed for more than 70 deaths.

By Saturday afternoon, the sun had come out in Dallas and temperatures were nearing the 50s. People emerged to walk and jog in residential neighborhoods after days indoors. Many roads had dried out, and patches of snow were melting. Snowmen slumped.

Linda Nguyen woke up in a Dallas hotel room Saturday morning with an assurance she hadn’t had in nearly a week: She and her cat had somewhere to sleep with power and water.

Electricity had been restored to her apartment on Wednesday. But when Nguyen arrived home from work the next evening, she found a soaked carpet. A pipe had burst in her bedroom.

Deaths attributed to the weather include a man at an Abilene health care facility where the lack of water pressure made medical treatment impossible. Officials also reported deaths from hypothermia, including homeless people and those inside buildings with no power or heat. Others died in car accidents on icy roads or from suspected carbon monoxide poisoning.

Roughly half the deaths reported so far occurred in Texas, with multiple fatalities also in Tennessee, Kentucky, Oregon and a few other Southern and Midwestern states.

A Tennessee farmer died trying to save two calves from a frozen pond.

President Joe Biden’s office said Saturday he has declared a major disaster in Texas, directing federal agencies to help in the recovery.

U.S. Rep. Alexandria Ocasio-Cortez, a New York Democrat, tweeted Saturday that she helped raise more than $3 million toward relief. She was soliciting help for a Houston food bank, one of 12 Texas organizations she said would benefit from the donations.

The storms left more than 300,000 still without power across the country on Saturday, many of them in Texas, Louisiana and Mississippi.

More than 50,000 Oregon electricity customers were among those without power, more than a week after an ice storm ravaged the electrical grid. Portland General Electric had hoped to have service back to all but 15,000 customers by Friday night. But the utility discovered additional damage in previously inaccessible areas.

Oregon Gov. Kate Brown ordered the National Guard to go door-to-door in some areas to check on residents’ welfare. At its peak, what was the worst ice storm in 40 years knocked out power to more than 350,000 customers.

In West Virginia, Appalachian Power was working on a list of about 1,500 places that needed repair, as about 44,000 customers in the state remained without electricity after experiencing back-to-back ice storms Feb. 11 and Feb. 15. More than 3,200 workers were attempting to get power back online, their efforts spread across the six most affected counties on Saturday.

In Wayne County, West Virginia, workers had to replace the same pole three times because trees kept falling on it.

“We have a responsibility to protect Texans from spikes in their energy bills” resulting from the weather, he said in a statement.

Water woes added misery for people across the South who went without heat or electricity for days after the ice. Snow storms forced rolling blackouts from Minnesota to Texas.

Robert Tuskey was retrieving tools from the back of his pickup truck Saturday afternoon as he prepared to fix a water line at a friend’s home in Dallas.

“Everything’s been freezing,” Tuskey said. “I even had one in my own house … of course I’m lucky I’m a plumber.”

Tuskey, 49, said his plumbing business has had a stream of calls for help from friends and relatives with burst pipes. “I’m fixing to go help out another family member,” he said. “I know she ain’t got no money at all, but they ain’t got no water at all, and they’re older.”

In Jackson, Mississippi, most of the city of about 161,000 lacked running water, and officials blamed city water mains that are more than 100 years old and not built for freezing weather.

The city was providing water for flushing toilets and drinking. But residents had to pick it up, leaving the elderly and those living on icy roads vulnerable.

Incoming and outgoing passenger flights at Memphis International Airport resumed Saturday after all flights were canceled Friday because of water pressure problems. The issues hadn’t been resolved, but airport officials set up temporary restroom facilities.

The men who are sick, elderly or being held not in dormitories but in cell blocks — small spaces surrounded by concrete walls — were especially vulnerable, according to Voice of the Experienced, a grassroots organization founded and run by formerly incarcerated people. The group said one man at Elayn Hunt Correctional Center, just south of Baton Rouge, described a thin layer of ice on his walls.

Cammie Maturin said she spoke to men at the 6,300-inmate Louisiana State Penitentiary in Angola who were given no extra provisions to protect themselves from the cold.

“They give them no extra blankets. No extra anything. For them, it’s just been fend for yourself,” said Maturin, president of the nonprofit H.O.P.E. Foundation.

In many areas, water pressure dropped after lines froze and because people left faucets dripping to prevent pipes from icing, authorities said.

That’s up from 1,300 reporting issues Friday afternoon. But Baker said the number of affected customers had dropped slightly. Most were under boil-water orders, with 156,000 lacking water service entirely.

“It seems like last night we may have seen some stabilization in the water systems across the state,” Baker said.

The Saturday thaw after 11 days of freezing temperatures in Oklahoma City left residents with burst water pipes, inoperable wells and furnaces knocked out of operation by brief power blackouts.

Rhodes College in Memphis said Friday that about 700 residential students were being moved to hotels in the suburbs of Germantown and Collierville after school bathrooms stopped functioning because of low water pressure.

Memphis, Tennessee, saw 10 inches of snow last week. Memphis, Light, Gas & Water issued a boil-water advisory on Thursday out of concern that low water pressure caused by problems at aging pumping stations and water main ruptures could lead to contamination. The advisory was still in place Sunday; utility officials said they did not know when they might lift it.

About 260,000 homes and businesses were under the advisory. Hospitals and nursing homes have been forced to switch to bottled water. The Tennessee National Guard was supplying St. Francis Hospital with water.

Flights resumed Saturday at Memphis International Airport after everything was grounded Friday because of water pressure problems. Some problems still lingered, but airport officials set up temporary restrooms.

Flames shot from the top of the four-story hotel, and three people required medical care. Displaced guests were taken to a nearby Baptist church.

Smaller outages remained, but Bill Magness, president of the Electric Reliability Council of Texas, said the grid now can provide power throughout the system.

Abbott ordered an investigation into the failure for a state known as the U.S. energy capital. ERCOT officials have defended their preparations and the decision to begin forced outages Monday as the grid reached breaking point.

The blackouts resulted in at least two lawsuits filed against ERCOT and utilities, including one filed by the family of an 11-year-old boy who is believed to have died from hypothermia. The lawsuits claim ERCOT ignored repeated warnings of weaknesses in the state’s power infrastructure.

President Joe Biden is eager to visit Texas, which was hit especially hard by the weather, Psaki said. Biden hopes to travel to the state this week but “doesn’t want to take away resources” from the response, she said. Biden declared a major disaster in Texas on Saturday.

“He is . . . very mindful of the fact that it’s not a light footprint for a president to travel to a disaster area.

“We certainly would welcome him,” Turner said.