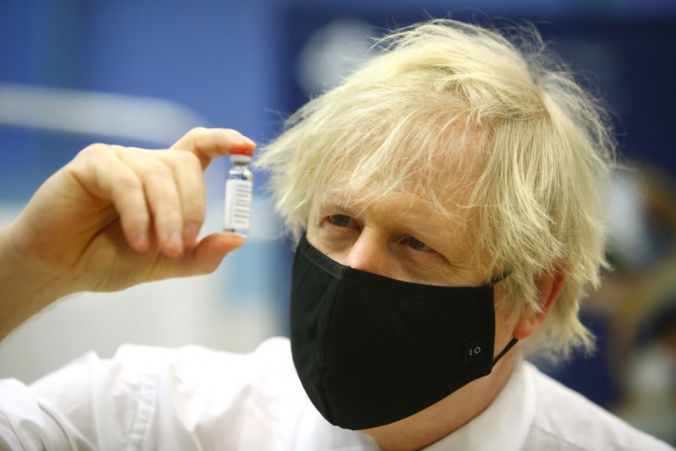 Boris Johnson has pledged to offer all adults in the UK a coronavirus vaccine by the end of July as he prepares to set out his road map to relax lockdown restrictions in England.

The British Prime Minister said the accelerated rollout of jabs would enable the easing of some of the stringent measures — but insisted that the unlocking would be “cautious and phased”.

Mr Johnson has spent the past week considering data on deaths, cases, hospital admissions and the effect of the vaccine rollout, and will unveil his blueprint to Parliament on Monday.

The road map is expected to include target dates for the relaxation of restrictions, but a UK government source stressed that they would be guided by the data at each stage.

It will include an expedited target to vaccinate all adults aged over 50 — as well as those with underlying health conditions which put them at higher risk — by April 15TH.

By July 31st, the British government hopes to have offered all adults in the UK a jab — though the order of priority for those under 50 has yet to be outlined by the Joint Committee on Vaccination and Immunisation (JCVI).

Ministers had set a target to offer vaccines to all adults by September, with an aim to reach all those aged 50 and over in the first nine JCVI priority groups by May.

The new targets will be seen as a sign of increasing confidence within the UK government that the vaccine supply will remain steady over the coming months.

An ambition to offer jabs to all those in the top four priority groups — adults aged 70 and over, frontline health and social care workers and the most clinically vulnerable — was met by February 15.

Mr Johnson said there would be “no let up” in the vaccine rollout, saying he wanted to see it go “further and faster in the coming weeks”.

“We will now aim to offer a jab to every adult by the end of July, helping us protect the most vulnerable sooner, and take further steps to ease some of the restrictions in place.

“But there should be no doubt — the route out of lockdown will be cautious and phased, as we all continue to protect ourselves and those around us.”

The prime minister will chair a meeting of senior ministers on Sunday, known as the “Covid S” committee, to finalise his road map before it is signed off by the Cabinet on Monday.

He will then unveil the plans to MPs in the Commons later that afternoon and is expected to lead a Downing Street press conference on Monday evening.

Labour welcomed the accelerated vaccine target, but called on the government to “urgently” set out how they will prioritise those aged under 50.

Shadow health secretary Jonathan Ashworth said: “It’s perfectly reasonable for teachers, police officers and other key workers who haven’t been able to stay at home in the lockdown to ask when their turn will be.

“If Government aren’t going to prioritise by occupation in the next phase they need to set out why.

Downing Street said the JCVI would publish its priority list for the second phase of the vaccine programme in due course.

Meanwhile, Minister for Health Stephen Donnelly has said Ireland has to accept it is lagging behind the UK when it comes to vaccinating people against Covid-19.

But defending the slower pace of rollout here when compared to the North and Britain, he said the Republic was performing well compared with other countries globally and within the EU.

As the Irish Times reports, he told reporters at The Helix at Dublin City University (DCU), the State’s first mass vaccination centre that “People are very reasonably looking at the UK and saying, well, the UK are further ahead.”

“And they are. We have to accept that, they are.”

But Ireland has “one of the faster vaccine roll-outs in the EU” and risked being even worse off if it decided to go it alone in purchasing its own supply of jabs, he added.