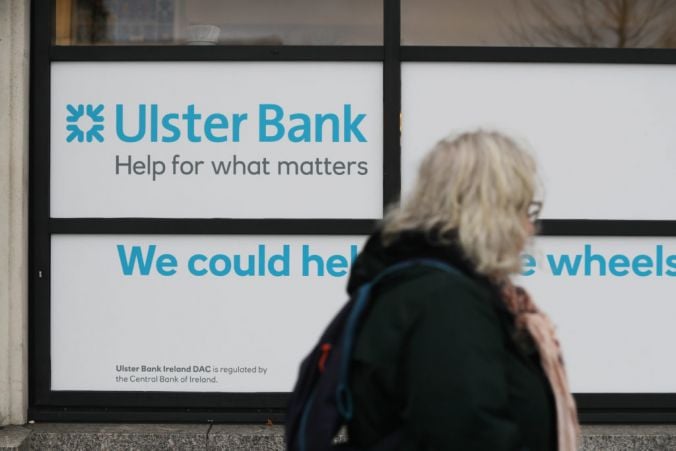 Ulster Bank is withdrawing from the market in the Republic. Photo: PA Wire/PA Images

Ulster Bank customers who learned the bank will be pulling out of the Irish market have expressed their “disappointment” and “frustration” at the situation they find themselves in.

Ulster Bank’s parent company NatWest confirmed on Friday that Ulster Bank is to begin a phased withdrawal from Ireland after 160 years operating in the market.

At the bank’s O’Connell Street branch in Dublin city centre loyal customers voiced their anxieties about the withdrawal.

Dubliner Anthony Abbott King, who has been a customer for more than 30 years, said he was disappointed by their decision to pull out of the market.

“It is frustrating,” he said. “I’m in my early 50s and I’m very conscious of the fact that banking is a personal relationship.

“For me it’s one of those relationships of trust, like my doctor or solicitor and that doesn’t exist anymore. It’s disappearing.”

“I’ve banked with Ulster Bank from when I was a student at Trinity and because the Ulster Bank branch was across from the Arts Block,” he said.

“That’s why I opened my account there and I found them to be good to deal with.”

But in recent years Mr Abbott King said he has been disappointed by the bank’s customer service.

“What I’ve noticed in the last few years is that Ulster Bank do not want you to be in the branch and they actively ask you every time: ‘Do you have online banking?’ and I prefer to go to the branch for the minimum amount of transactions I require,” he said.

“They do not want you to be present. They want you to do your transactions online but I like the autonomy of going into the branch.”

It is the second time Mr Abbott King has been affected by financial institutions closing their doors in the Irish market.

“Danske Bank was the bank for my mortgage and it subsequently transferred to a vulture fund,” he said.

“I haven’t had an issue with them but I’m not in default on my mortgage, I’ve paid it consistently.”

He doesn’t have a mortgage account with Ulster Bank but he believes those customers who do will be “really apprehensive”.

Sohail Ahmad from Dublin said: “I thought it was a rumour or something but it’s really disturbing.

“I need to go to another bank to open an account now.

“I’ve one account in Ulster Bank so I’ll go and see what other bank is better.

“It’s definitely disappointing for me because I was really happy, I never had an issue with payment with card or anything.”

“The bank had a really good reputation and it’s closing down so you never know what big companies are going down. It could affect some other banks.

“If this can be closed maybe some other bank could be affected too so I need to know before I open an account that it will be okay.

“It is a surprise. I was not expecting the bank to close. Other businesses yeah you expect but it’s the first time I’m seeing a bank closing down.

Romanian native Michaela Graur, who lives in Dublin, said she was “scared” by the announcement of the bank’s closure and made her way into the branch on Friday morning to seek clarity on the matter.

Ulster Bank is her main bank.

“I was a little bit scared to be honest – that’s why I came to the branch but they assured me that the closure will be in about a year,” she said.

“They advised me to reorientate to another bank. They reassured me and I feel a bit calmer now.”

She added: “What can I do. Now I have to do my own research for moving to another bank.”