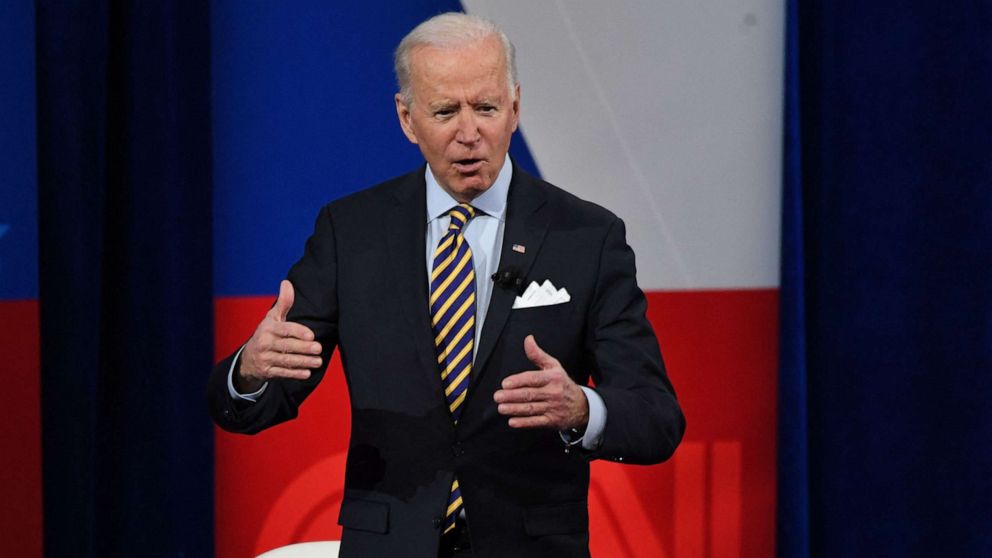 During the first televised town hall of his presidency on Tuesday night, President Joe Biden answered questions from Americans who were primarily focused on various aspects of the coronavirus pandemic, including vaccinations, school reopenings and how he planned to turn around the economy, but he also cautiously predicted that by Christmas the country could be nearing a return to normal.

“As my mother would say, ‘with the grace of God and the goodwill of the neighbors,’ that by next Christmas, I think we’ll be in a very different circumstance, God willing, then we are today,” Biden said on stage in Milwaukee during a CNN town hall. “A year from now, I think that there will be significantly fewer people having to be socially distanced, having to wear a mask, but we don’t know. So I don’t want to over promise anything here.”

Asked by moderator Anderson Cooper when every American would be able to get a coronavirus vaccine, Biden said, “by the end of July we’ll have over 600 million doses, enough to vaccinate every single American,” which is a similar timeline to what he announced on Feb. 11 during a visit to the National Institutes of Health.

A mother of a college student with chronic obstructive pulmonary disease (COPD) expressed to Biden her frustration that other Americans, who she said are less vulnerable than her son, are able to get the vaccine first.

“Do you have a plan to vaccinate those who are most vulnerable sooner to give them a priority?” she asked.

Though he initially answered, “Yes, there are,” Biden immediately pivoted to a blunt acknowledgment that prioritization for population groups is up to the states, not him.

“The states make the decisions on who is in what order. I can make recommendations, and for federal programs, I can do that, as president of the United States, but I can’t tell the state: ‘You must move such and such a group of people up.’”

Cooper followed up to ask whether prioritizations should stop once Johnson & Johnson vaccines become available, but Biden said it still depends on whether there are enough doses available for everyone.

“I think there still should be priority groups in case there are not enough for everyone, available to everybody.”

The president also tried to clarify his pledge to reopen schools within his first 100 days in office, which drew backlash last week after White House press secretary Jen Psaki tried to define what Biden meant by “open,” saying some teachers and students would be returning for “at least one day a week.”

“It was a mistake in communication,” Biden said, adding that he believes “many” kindergarten to 8th-grade students would be returning to five days a week of in-person learning by the end of his first 100 days.

Biden said when students and teachers return to the classroom, it would look different and suggested smaller class sizes, which would result in a need for more teachers to accommodate.

“Instead of a classroom of 30 kids in it, you have three classes of 10 kids each. I’m making the number up, less, doesn’t have to be literally 10. In addition to that, we also have indicated that it is much better and it’s much easier to send kids K through 8 back because they are less likely to communicate the disease to somebody else.”

He also said that teachers should move up in the hierarchy for getting vaccines, but did not say whether he thinks it should be a requirement before they go back to their classrooms.

His trip to Wisconsin was also used as a platform to sell Americans on his American Rescue Plan, the $1.9 trillion COVID-19 relief legislation currently being negotiated in Congress.

Biden has expressed hope this bill would be bipartisan, but he currently has no Republican senators backing it publicly, even some Democrats like Sens. Joe Manchin and Kyrsten Sinema have voiced opposition to the $15 minimum wage increase that is in the proposal.

Biden acknowledged that “it’s totally legitimate for small business owners to be concerned” about an increase to the minimum wage Tuesday night, but said he would be doing it over time to avoid creating a major impact on businesses.

“It’s about doing it gradually. We’re at $7.25 an hour. No one should work 40 hours a week and live in poverty. … But it’s not illegitimate, as a small businessperson, to worry about whether or not increasing it at one fell swoop would have that impact.”

A recent report from the Congressional Budget Office on this hike said Biden’s proposal would pull 900,000 Americans out of poverty, but cause about 1.4 million jobs to be lost, higher prices on home goods and an increase in the federal deficit.

Biden did his best to avoid directly speaking about his predecessor, Donald Trump, but with his second impeachment trial just concluding on Saturday, Biden was asked if he agreed with House Speaker Nancy Pelosi’s characterization of Republican senators who voted to acquit Trump as “cowards.”

Biden said he wouldn’t mention anyone specifically, but made his feelings loud and clear: He’s ready to move on from Trump.

“For four years, all that’s been in the news is Trump. The next four years, I want to make sure all the news is the American people. I’m tired of talking about Trump,” Biden said.

Asked whether he would allow the Justice Department to investigate Trump, Biden repeated his campaign promises never to influence the work of an independent DOJ.