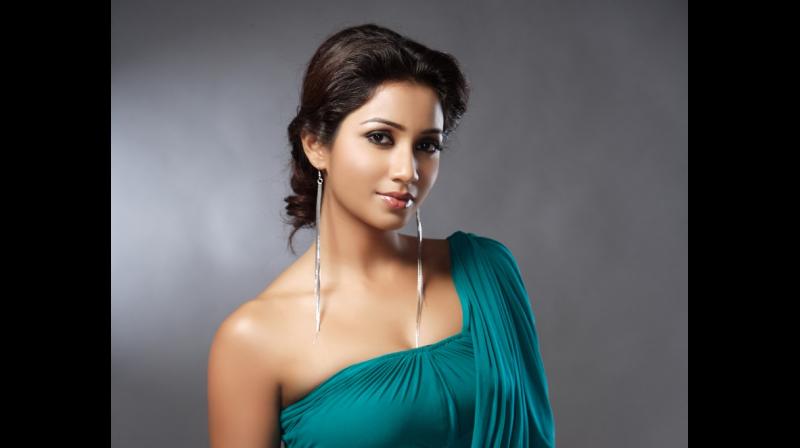 Shreya Ghoshal, the common factor in Bairi piya, Dheere jalna, Dola re dola and Ghoomar, started her decade-long journey with Devdas in 2002. Down the years, she mesmerised the audiences with melodious sweet songs as well as peppy dance numbers, surprising everyone with her versatility. Today, she is a name well-known not only in Bollywood but also in various regional cinemas.

Now, her latest single Angana morey, which released earlier in February this year, is topping the music charts. The composition is something she worked on with her brother Soumyadeep Ghoshal, which combines Indian classical music with electronic beats and sounds.
Talking about this experiment, the singer says, “It actually happened during the lockdown when I was feeling very uninspired and bored. I wanted to do something that would at least give me some joy because it was a time none of us could go out or be playful.”

Rooting for classical music among the new gen

Shreya tells us that the idea for the song came from her love of classical music. “That is where my roots are and it is undoubtedly my first love,” she elaborates. “I also wanted this song to be intelligently packaged so that it sounds contemporary and takes you on a journey with well-accentuated emotions.”

Despite her bias towards the musical form, Shreya clearly understands that though classical music in its purest form is very beautiful, it can be hard for audiences to consume it. “I wanted this song to appeal to all generations and for it to take them on a journey within the span of just five minutes,” she explains, adding that she decided to do the kind of music she wanted to hear herself. All said and done, one thing Shreya was clear on was that she did not want to take the stereotypical fusion route. And her brother Soumyadeep took it up as a challenge to do the rest. “He did something very Indian and very modern with the bass notes and trance, bringing together all those different genres. It did not seem forced and flowed quite harmoniously instead,” adds a proud Shreya.

On collaborating with her brother

Incidentally, Shreya has previously collaborated with her brother, having done a song, called Na woh main, which she calls her first attempt at a proper pop song. Then elaborating on her experience of working with her brother, Shreya tells us that although Soumyadeep has the same roots as her, he has a young, modern, varied and global perspective towards music. “He brings a lot of different, contemporary, cutting-edge elements to a composition. He respects me a lot, listens to my points-of-view,” she says, adding that the duo shares a good understanding as siblings.

Angana morey, she tells us, is her attempt at getting people to appreciate classical music without losing the contemporary audience. “We hope that this kind of music reaches out to a young generation of music lovers as well as the generation that appreciates soulful Indian music,” she adds.

The challenges of virtual recordings

The year 2020 was a welcome break for Shreya, she says, from the non-stop career responsibilities she’s had for the past 20 years, during which she enjoyed being at home, taking out time to be with her family, listen to music, learn, get back to her riyaaz, think, and be in a very creative space without having deadlines.

However, getting the music video done was a challenge, given that it needed to be done virtually owing to the lockdown and COVID-19 situation. And that was especially so because Shreya has never recorded from home. But changing times call for changing perspectives.

“Now I have set up a home studio and have learnt to record my own voice without an engineer,” she says. “Angana morey was created from scratch, quite unlike the readymade songs coming to me for recording. I was constantly in touch with my brother who lives in the US, which meant a time-zone difference with the ideas developing during FaceTime and Zoom calls.” Adding to the challenge was that all the other musicians were also in different places. “Some were in New York, some in Delhi, someone was in Dallas and the Budapest Orchestra was in Hungary. Still, this was a great learning experience and a lot of fun,” asserts Shreya.

Angana morey also brought out the lyricist in Shreya. “It was fun to write the song but the writing part was a little difficult for me as it was my first song as a lyricist. And there was a question in the back of my mind if people would like it and what they’d think about it. But I am overwhelmed to see the response and the love that people are showering upon the song,” says Shreya.

The flow of projects has, however, now resumed with all the big-budget films going on the floors. On the anvil for the singer are some big films and songs as well as independent collaborations with new artists, composers, songwriters etc. Shreya also has regional songs in Tamil, Telugu, Kannada, Malayalam and Bengali. She also says there will be more independent and exciting projects after Angana morey.

Speaking of the multiple regional projects lined up for her, Shreya believes she is fortunate to have gotten the opportunity to sing in as many languages. “I have been very fortunate to sing in all the four South-Indian languages and many songs in Bengali, Assamese, Marathi and Gujarati. I want to sing as many diverse compositions as possible because I do not want to miss any opportunity to create good music, memories and a legacy. However, doing justice to the different dictions is not easy,” says the modest singer.

Shreya admits that initially, the Southern languages were a little challenging for her. “I do not take it easy even now because it is very easy to mess up the diction and be criticised for not perfecting the language. But I have been very, very conscious about that fact, and luckily, I have been able to get the diction and the nuances of the languages right. It is something that I really like because I have an inherent love for different languages and cultures,” adds Shreya as we end our interaction.