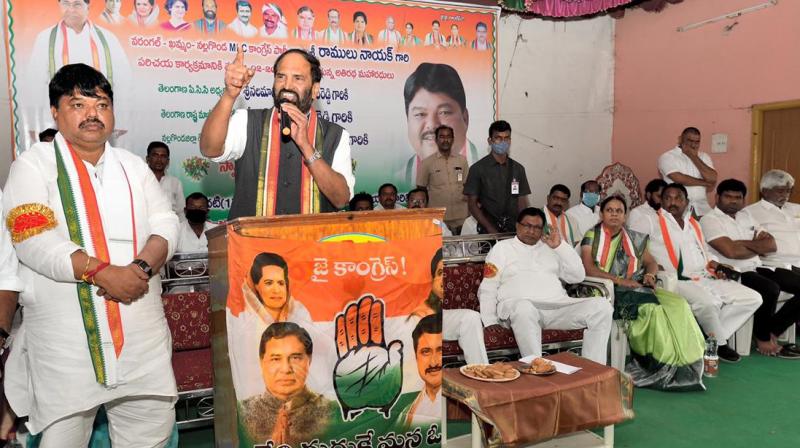 Hyderabad: Telangana state Congress president N. Uttam Kumar Reddy on Sunday, while addressing a meeting at Tripuraram, appealed to Nagarjuna Sagar voters to elect Congress candidate Ramulu Naik as their MLC from the Khammam, Warangal and Nalgonda graduate constituency and former home minister and leader of the opposition (LoP) K. Jana Reddy as an MLA from the Nagarjuna Sagar assembly seat in the forthcoming by-election.

The state PCC chief said that neither the BJP government at the Centre nor the TRS in the state did anything for the people of Telangana, especially the voters of Nagarjuna Sagar.

“As Chief Minister of Telangana, KCR should have participated in the meeting to raise issues concerning the state. By skipping the meeting, KCR has sent a clear message that either he is not interested in the development of Telangana or he has completely surrendered before the Modi government and given it a free hand to do whatever it wants,” he said.

He said Chandrashekhar Rao never missed an election or party meeting as he is interested in retaining power at all costs. But he never gives importance to administration and governance of the State.

“It is highly unfortunate that Telangana got a CM who only rests at his palatial bungalow or his farm house. But he never finds time to meet people to listen to their grievances and resolve them. While other CMs presented a wishlist for their respective states, KCR decided to take rest by assigning the job to Chief Secretary Somesh Kumar,” he said.

Mr Reddy said that the TRS and BJP were enacting a drama of rivalry by targeting each other. But in reality, they are shielding each other’s failures and scams. He challenged BJP Telangana state president Bandi Sanjay to write a formal letter to his party’s government at the Centre, seeking a probe through CBI, Enforcement Directorate and other agencies into the corruption charges against Chief Minister Chandrashekar Rao.

Similarly, he challenged the Chief Minister to address a press conference, denouncing the new farm laws and other faulty decisions of the Modi government.

Speaking about the brutal murder of lawyer couple, Gattu Vaman Rao and Nagamani in Peddpalli district, he said Chief Minster Rao and his son and minister K. T. Rama Rao have turned so insensitive that they did not even condemn the murder.

Reiterating the demand for CBI enquiry into the murder, Mr Uttam Reddy expressed fear that the Telangana police might hush up the case as several top leaders of TRS were allegedly involved in it.

He said that the TRS government had cheated all sections of the society, especially employees and jobless youth. He slammed the new Pay Revision Commission for recommending fitment of just 7.5 per cent and a reduction in HRA for government staff.

He also urged voters of Hyderabad, Ranga Reddy and Mahabubnagar graduate constituency to vote in favour of Congress candidate G. Chinna Reddy.  A victory of Congress in the two MLC seats and Nagarjuna Sagar assembly bye-elections would completely change the political situation in the state, he added.