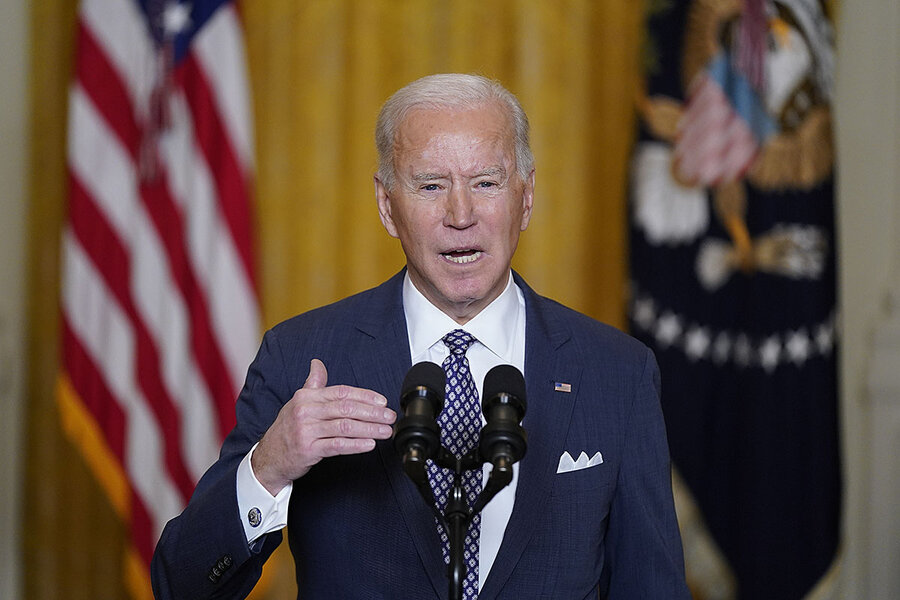 If history is any guide, President Joe Biden may well have just two years – tops – to get big measures through a narrowly divided Congress. And his agenda is as packed and urgent as any for a new president since Franklin Roosevelt took office during the Great Depression.

From COVID-19 and economic relief, to immigration, infrastructure, and climate change, President Biden is swinging for the fences on priorities that would both address the immediate crises and set the nation on a course dramatically different from that of his predecessor.

On the international stage, too, Mr. Biden is making his mark. On Friday, he made his debut by video conference with top global allies focused on the pandemic, climate, the world economy, security, and China.

But it’s on domestic policy where an American president most often needs Congress’s approval, including permission to deploy federal funds. And there, Mr. Biden’s high-wire act may be the most precarious. Democrats control the House and Senate by the slimmest of margins, and the 2022 midterms already loom large. In three of the last four presidencies, the new chief executive’s party lost control of at least one congressional chamber after just two years, hampering their ability to implement major initiatives.

For Mr. Biden, a 36-year veteran of the Senate, the competing impulses are stark: His legislative past is rooted in bipartisanship but he also wants and needs to get things done, especially in ways that improve Americans’ lives tangibly and immediately. Thus, the willingness to try to pass a $1.9 trillion COVID-19 relief package with just Democratic votes.

“The principal question, the political strategic question, confronting the Biden administration now is whether the COVID-19 bill is the template for the other big proposals or whether it’s an exception to a more consensual, cross-party mode of governance,” says William Galston, former domestic policy adviser in the Clinton White House.

The answer may be a hybrid: Work hard to bring Republicans on board for legislation with bipartisan potential, but when push comes to shove, be willing to go it alone with Democratic votes. Even maintaining unity among Capitol Hill’s ideologically diverse Democrats – from Sen. Joe Manchin of deep-red West Virginia to Vermont Sen. Bernie Sanders, a progressive independent – has already tested Mr. Biden’s political skill.

Senator Manchin’s rejection Friday of Neera Tanden for budget director, citing her past attacks on both Democrats and Republicans and imperiling her nomination, is a stark example of how just one vote in a 50-50 Senate can have a profound impact.

In addition, it is the more centrist Democratic senators, including Mr. Manchin and Kyrsten Sinema of Arizona, who oppose ditching the filibuster; thus the need to pass most legislation with 60 votes. On COVID-19 relief, Democrats are using a budgetary rule that allows bills to pass the Senate by majority vote – though the provision raising the federal minimum wage to $15 may not qualify for consideration under that rule, known as “reconciliation.” The House takes up the bill this week; Senate action is expected next week.

Despite Mr. Biden’s frequent calls for unity and bipartisanship at a time of national crisis, he needs results – fast, Democrats say.

“The No. 1 commitment he made to people was to combat COVID and combat the economic devastation, and he’s doing that,” says Democratic strategist Jesse Ferguson. “He’s shown that he’s putting his shoulder into getting that done with the rescue plan.”

Another option for Democrats eager to notch victories is to break off the most popular pieces of big legislative packages and pass those separately.

One example is comprehensive immigration reform. With Mr. Biden’s blessing, congressional Democrats last week released a long-promised plan, including an eight-year pathway to citizenship for most people in the country illegally. The plan is a long shot – the last such sweeping reform passed in 1986 – but during the campaign, Mr. Biden and the Democrats promised to try. They say it’s the right thing to do in a nation built on immigration.

Opponents immediately tarred the path to citizenship as “amnesty,” and there’s already talk among Democrats of passing one popular element – granting legal status to so-called Dreamers – as stand-alone legislation. That, at least, would help young people brought illegally into the U.S. as children, who gained access to work permits and temporary protection from deportation under President Barack Obama.

There’s no doubt Mr. Biden, who served eight years as President Obama’s vice president, absorbed the lessons of that period. At the state level, especially in red states, some Democratic leaders talk about the need for pragmatism.

“Any forward momentum that we have on immigration is a step in the right direction,” says Jane Kleeb, chair of the Nebraska Democratic Party and a progressive activist. “If we try to do everything, we give Republicans too much wiggle room to say, ‘There’s too much in the bill.’”

In Washington, some veterans of legislative wars warn against giving up on doing big things too easily. Bobby Juliano, a consultant with ties to organized labor, says “breaking off” the Dreamers into a separate bill from the get-go means giving up leverage to pass the whole package.

Still, for Democrats in red states like Nebraska, the saying “don’t make perfect the enemy of the good” looms large. In another example, Ms. Kleeb accepts Mr. Biden’s early willingness, if need be, to drop the minimum wage increase from the COVID-19 relief bill. That measure is a long-held goal of progressives and popular among Americans, but seen as problematic among many Republicans and some more-conservative Democrats, including Mr. Manchin, especially at a time when smaller businesses in particular are having trouble keeping their doors open.

“As a progressive, I want to see that, of course. But I also know the political reality,” says Ms. Kleeb of the “fight for $15.” “As we head into 2022, we need to have some very concrete results that we can show voters so I can pick up state legislative seats and that congressional seat that we should have won in the last cycle.”

Susan MacManus, an emeritus political science professor at the University of South Florida in Tampa, also stresses Mr. Biden’s need to improve Americans’ lives in tangible ways in his opening sprint in office.

“Every day that goes by that Congress can’t get aid to people, the higher the level of mistrust of Congress and the president’s ability to get things done,” Professor MacManus says.

If Mr. Biden and the Democrats are seen as failing, she says, that could hurt them among key voter groups in the 2022 midterms.

“You want to lose suburban women? Just keep the kids out of school even longer,” she says.

In fact, of all the promises Mr. Biden has made, reopening the majority of K-8 schools by the end of his first 100 days may be among the most important. Ongoing school closures since the pandemic began almost a year ago have been devastating for children and parents alike, especially women, many of whom have had to drop out of the workforce.

Mr. Biden can’t reopen schools by executive action. That’s a matter of state and local control, though federal funds in the COVID-19 relief bill are meant to help make reopening safe. Teachers unions, a mainstay of the Democratic Party, have pushed back on reopening in some localities, complicating the politics.

The president has also run afoul of labor interests, with his Day One move to end construction on the Keystone XL pipeline, which cost unionized jobs. Still, that action pleased climate activists – including Ms. Kleeb, who long fought the pipeline.

All together, Mr. Biden’s agenda and executive actions so far demonstrate the challenge of navigating competing interests and keeping his allies happy at least some of the time, even as he disappoints them at other times.

Still, the overarching Biden modus operandi centers on the need to move fast – and logging an impressive record by his 100th day in office, April 30. The clock is ticking. Some 500,000 Americans have now died from COVID-19, a milestone that Mr. Biden planned to commemorate Monday evening with remarks and a candle-lighting ceremony. He has ordered flags flown at half-staff for the next five days in honor of those lost to the pandemic.

If even one Democratic senator were to switch parties (not seen as likely) or vacate their seat and be replaced by a Republican, the party would lose its majority and thus the ability to pass legislation and confirm officials and judges along party lines.

“The more closely divided the country is politically, the more incentive there is to accelerate the process,” says Mr. Galston, chair in Governance Studies at the Brookings Institution. “You don’t know how long you’ll have the power to do what you want.”