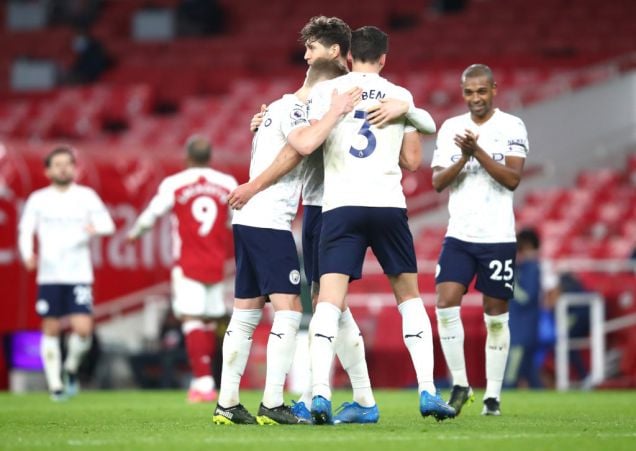 Sterling, one of the smallest players on the pitch, was allowed a free header on the edge of Arsenal’s six-yard box to convert Riyad Mahrez’s cross after only two minutes.

Yet despite getting off to the perfect start, City could not add to their lead as Arsenal slowly stemmed the flow of attacks.

The Gunners began to enjoy more possession but lacked the guile to test Ederson in the City goal.

Joao Cancelo should have wrapped up the points for the leaders with 10 minutes remaining but poked his effort wide.

It was not the most convincing display by Pep Guardiola’s side but nonetheless they strengthened their hold in the title race.

West Ham boosted their top-four bid with a 2-1 win over Tottenham, who lost for the fifth time in six Premier League games to leave Jose Mourinho feeling the pressure.

The Hammers climbed into fourth thanks to goals from Michail Antonio and Jesse Lingard, giving them their highest ever points tally at this stage of the season in the Premier League era.

They are nine points above their London rivals and David Moyes celebrated his first win over Mourinho at the 16th time of asking after withstanding a late assault by Spurs, who pulled one back through Lucas Moura.

But they could not find a leveller, hitting the woodwork twice through Gareth Bale and Son Heung-min as West Ham clung on.

Leicester strengthened their grip on a Champions League spot with a 2-1 win at Aston Villa.

Bertrand Traore pulled a goal back for the hosts but they could not find an equaliser against Brendan Rodgers’ side, who have lost just once in their last 12 league games.