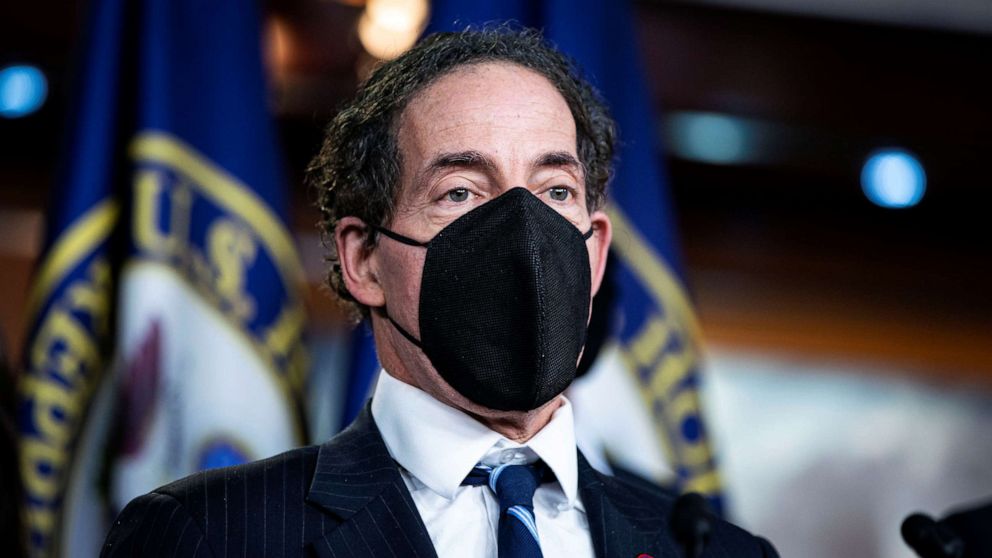 A constitutional law professor for 25 years, Raskin told ABC News Political Director Rick Klein that Trump was precisely who that part of the amendment covers.

“Donald Trump is right in, you know, the bullseye middle of that group,” he said, referencing how the lawmakers at the end of the Civil War intended for it to be used. “And so, he really does fulfill exactly the constitutional prohibition there.”

Section 3 of the 14th Amendment bars any public official who swore an oath to protect the Constitution from holding office if they “engaged in insurrection or rebellion” against it or gave “aid or comfort to the enemies thereof.”

Raskin said how the amendment would be enforced remains to be seen.

“Presumably, it could be done both affirmatively and defensively,” he said. “People — you know if he tried to run for office again — people could try to stop him in the states. It also conceivably could be an affirmative statement by state legislators, by Congress, by other institutions.

“So we’d have to figure it out and do some more research about all of that, but the point is that the constitutional purpose is clear, to keep people exactly like Donald Trump and other traitors to the union from holding public office,” he added.

The Senate acquitted Trump for the second time Saturday after he was charged with “incitement of insurrection” for his actions leading up to the Jan. 6 attack on the U.S. Capitol. Seven Republicans joined Democrats to vote to convict Trump, but they fell short of the 67 votes needed to convict the former president.

On Monday, House Speaker Nancy Pelosi announced that Congress would establish an independent commission to investigate the Jan. 6 riot, similar to one established after the Sept. 11 terrorist attacks.

Raskin told the “Powerhouse Politics” podcast that he supports a commission to investigate the Jan. 6 insurrection. It should be either nonpartisan or bipartisan in nature, he said, and it should “definitely” have subpoena power.

“It should aim at the truth of both the events of (Jan. 6), and then also the causes of it and the continuing dangers that the republic experiences from this kind of, you know, this kind of assault on our democratic institutions,” he said.

“Of course they should be able to get the testimony of the president and the White House chief of staff and other people involved,” Raskin added. “What does it mean to have public office and not to subject yourself to public accountability? I mean that — the whole idea is absurd.”

While Raskin said managers got the evidence they wanted in the trial, he slammed Trump for not testifying.

“You know, what a snowflake he is. He can’t even stand up with the people that he counseled into a violent insurrection against the union and these people are facing hundreds — or I haven’t added up all the cases yet — maybe 1,000s of years in prison,” he added. “And he won’t even come and speak for them.”

Raskin said it was “meaningful information” that Trump was still saying that he won the election in a recent interview with Fox News but that it was not surprising.