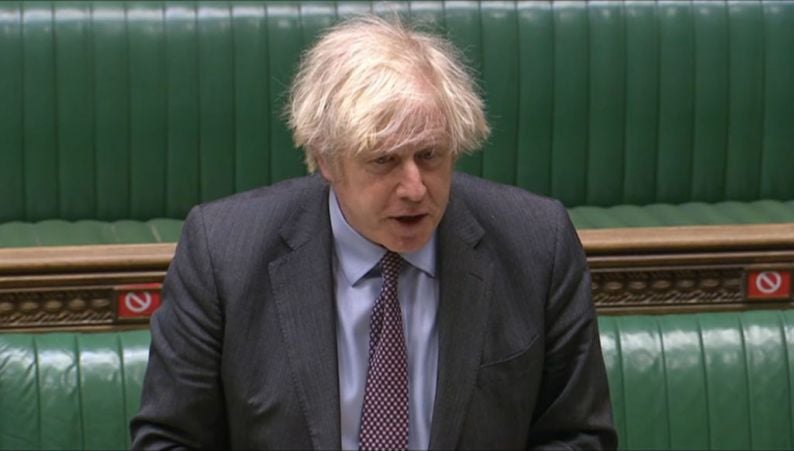 England’s Covid-19 restrictions could finally be lifted by June 21st as part of a four-stage plan, Boris Johnson has announced as he declared “the end really is in sight”.

The British prime minister told MPs the approach was “cautious but also irreversible”, with the impact of the vaccination programme replacing the need for lockdown measures.

He said a “wretched year would give way to a spring and a summer that will be very different and incomparably better”.

The prime minister acknowledged that scientific modelling suggested that lifting lockdown measures would increase Covid-19 cases and ultimately deaths but insisted the restrictions could not continue indefinitely.

In the first phase, all pupils in England’s schools are expected to return to class from March 8th, with wider use of face masks and testing in secondary schools.

Socialising in parks and public spaces with one other person will also be permitted from that date.

A further easing of restrictions will take place on March 29th when the school Easter holidays begin – with larger groups of up to six people or two households allowed to gather in parks and gardens.

Other measures in the road map set out by Mr Johnson include:

Making a statement in the Commons, the prime minister acknowledged “the threat remains substantial” with the numbers in hospital only now beginning to fall below the peak of the first wave in April.

“And this would happen whenever lockdown is lifted – whether now or in six or nine months – because there will always be some vulnerable people who are not protected by the vaccines.

“There is therefore no credible route to a zero Covid Britain, or indeed, a zero Covid world and we cannot persist indefinitely with restrictions that debilitate our economy, our physical and mental wellbeing and the life chances of our children.”

The prime minister said his approach would be driven by “data not dates”, with the five-week gap between stages allowing time for the impact on infections to be determined and for companies to get ready.

Progress on the next steps out of lockdown will depend on meeting four tests: the success of the vaccine rollout, evidence of vaccine efficacy, an assessment of new variants, and keeping infection rates below a level that could put unsustainable pressure on the NHS.

Alongside the four-step plan, the prime minister launched a series of reviews – including on whether people should be able to show if they have had a Covid-19 vaccine or a negative test.

The work will look at whether “Covid status certification” could help reopen the economy by allowing people who have received a jab or a negative test result to do things which would not be allowed for those who could not prove their status.

Officials recognise that there are moral and ethical questions as well as practical ones for any such move, which has been highly controversial in Westminster.

A research programme will use pilot schemes involving testing and other measures to run events with larger crowd sizes.

International travel rules will also be reviewed, with May 17th targeted as the earliest possible date for a foreign holiday.

A further piece of work to conclude by June 21st will examine social distancing requirements, the use of face masks and requirements to work from home.

The measures are expected to be put to a Commons vote before the House rises for Easter in late March.

The extension of restrictions on some businesses into the summer will lead to an extension in taxpayer-funded support schemes, the prime minister indicated.

“We will not pull the rug out,” he said. “For the duration of the pandemic the government will continue to do whatever it takes to protect jobs and livelihoods across the UK.”

Chancellor Rishi Sunak is under pressure to extend measures such as the furlough scheme, which is due to expire at the end of April, when he delivers his Budget on March 3rd.