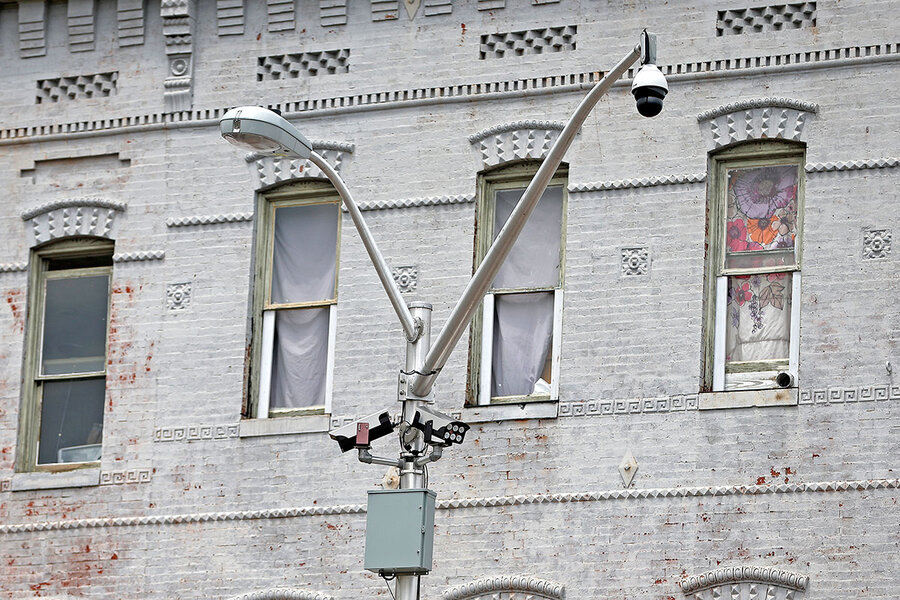 Though the program ended last October, and the city’s new mayor pledged the planes would not fly again, the reconsideration in March by the full, 15-member Fourth Circuit could determine whether the technology is permitted other places in the future, and, if allowed, under what conditions. Regardless of the court’s ruling, the larger question also remains: Did the program actually help to make Baltimore safer?

“If the courts allow this surveillance to go forward,”  says Ms. Gorski, “it will radically alter the relationship between the individual and the state.”

When demonstrations occurred last summer, the surveillance planes flew overhead in Baltimore, watching people, protests, and police from above. The planes captured footage of 32 square miles, with individuals represented as a single pixel. The ACLU’s Ms. Gorski says the technology is “capable of subjecting every square inch of the city to constant recording.”

But under the program detectives could request the aerial surveillance footage only after a crime had been committed. No distinguishing characteristics, like a person’s race or gender, can be identified from the footage, said Michael Harrison, the city’s police commissioner, last year. The moving dots are tracked to and from a crime scene and the footage is used in conjunction with other ground-based security cameras, license-plate readers, and gunfire locators as a tool to help solve crimes.

“Our job is to deter people,” says Ross McNutt, founder and president of the Ohio-based Persistent Surveillance Systems, which operated the surveillance planes and produced evidence packets for the Baltimore Police Department (BPD).

It’s not yet clear whether the program is more effective at solving crimes than policing methods that were already in place. The Baltimore police reported 390 armed robberies from May 1 to July 31 last year. According to the same report, confirmed by the Rand Corp., a nonpartisan research institution hired to evaluate the program, fewer than a fourth of those robberies were committed during the day, when the planes were operating. An even smaller number were actually recorded by the aerial cameras.

A Rand report published in January provided “no conclusions on the effectiveness of the AIR program,” but offered preliminary information showing slight increases in clearance rates for cases using AIR evidence. Rand is set to release its final report on the program in spring 2022.

Mr. McNutt’s company has a three-year contract pending in St. Louis that would allow the plane to fly day and night, but the contract has not yet been signed by the mayor. The organization, Arnold Ventures, headquartered in Houston, which financed the Baltimore operation and three program evaluations at a cost of roughly $3.7 million, said it will not fund the St. Louis program.

Complicating the issue is an 1860 law that places the Baltimore Police Department under the authority of the state legislature, even though the city’s tax revenue pays almost all the department’s expenses. Under this arrangement, the City Council lacked the opportunity to vote on whether to approve last year’s program, nor can it regulate its conditions.

“Democratic control, accountability, protection of civil rights and civil liberties … all of those are important components of public safety,” says Farhang Heydari, the executive director of the Policing Project at New York University School of Law, which audited the program and filed a brief supporting neither party, but encouraging the Fourth Circuit to rehear the case.

During the pilot program, accountability and local democratic control were lacking, says Lawrence Grandpre, the director of research for Leaders of a Beautiful Struggle, a grassroots Baltimore think tank, represented by the ACLU in the case.

Mr. Grandpre’s organization has been advocating returning control of the police department from the state legislature to the City Council since before Freddie Gray died while in police custody in 2015.

“The hope is that by returning legal authority to the city you can have a more democratically accountable relationship to the Police Department,” Mr. Grandpre says. “This returning of the BPD to the hands of the City Council, to the hands of the Baltimore City, would just be one further step toward creating what we hope is more grassroots, broad-based accountability in Baltimore.”

Brandon Scott, Baltimore’s mayor and previously the City Council president, sees the move as “essential” for the department and will be advocating for local control during the state’s legislative session, spokesperson Stefanie Mavronis said in an email.

With the court case scheduled to be reheard the second week of March, Mr. Grandpre says, “the legal victory that we hope to get is one piece,” but adds that another goal is reframing conversations around public safety.

“What we need to do is fundamentally rethink the reality of why people see violence as necessary,” he says, “and build an infrastructure that addresses those needs.”

Scientists confirm most distant thing ever seen in our solar system