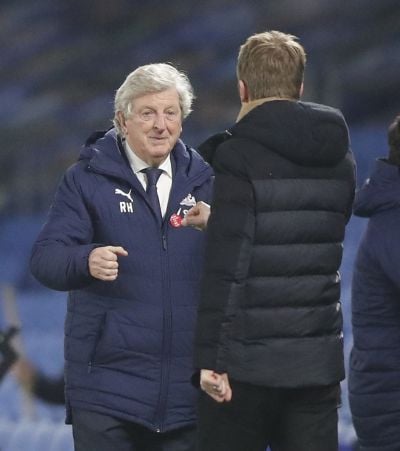 Roy Hodgson said he would not apologise for the manner of Crystal Palace’s performance after Christian Benteke’s injury-time winner snatched a 2-1 victory at bitter rivals Brighton.

Palace showed little ambition at the Amex Stadium and looked set to escape with a scantly-deserved draw after Jean-Philippe Mateta’s superb first-half opener was cancelled out by Albion defender Joel Veltman.

But the Eagles left the south coast with bragging rights thanks to substitute Benteke thumping home on the volley in the fifth-minute of added time.

After a supporter group banner questioning the club’s vision was briefly displayed outside the training ground last week and having scored with their only shots on target in Sussex, defiant boss Hodgson said the scoreline was the only relevant statistic.

“The game’s not about touches in the opposition box, is it? The game’s about scoring goals and not letting any in,” he said.

“I thought we worked unbelievably hard to try and make certain we didn’t let any goals in.

“I thought we worked so very hard to stop them getting many chances and tonight we were fortunate that the couple of chances we did create – and they were both very good goals – we took.

“The statistic that counts at the end of the day is goals against and goals for.

“Okay, they had the better of possession, that’s for sure, they had the ball in our box more often, they had more quality but I’m not going to apologise for coming away with what we consider to be a very good victory.”

Eagles boss Hodgson, who is out of contract in the summer, urged supporters to be “careful” what they wished for in the build-up to the game following recent unrest.

Mateta’s first goal for the club – a deft back-heel on the turn – and Benteke’s thunderous strike moved Palace 10 points clear of the bottom three.

The victory was also a first this season in the absence of injured talisman Wilfried Zaha.

Following defeats to Leeds and Burnley, Hodgson continued: “I don’t feel the need to be vindicated.

“I don’t like to use that word because the use of the word vindication would suggest that something has been going awfully wrong in what we have been trying to do for the whole of the season. I don’t think vindication is the right word.

“We needed a better performance, we needed to show the commitment, the courage, the desire that we showed tonight in such an important game. We needed to do that because our previous two games obviously weren’t good enough.”

Brighton boss Graham Potter admitted the manner of the defeat was a “blow” but said his “hurting” players cannot afford to dwell on the disappointment.

Albion, who had 25 attempts at goal to their opponents’ three, remain four points above the drop zone after their club-record Premier League unbeaten run was halted at six games in dramatic circumstances.

“We certainly pushed and pushed, I thought we were the dominant team but clearly we’ve been heavily punished,” said Potter.

“We’re just sore and disappointed, as you’d imagine, because the result’s a painful one but, when you analyse the game, the boys gave everything and it only looked like there was going to be one winner in the second half.