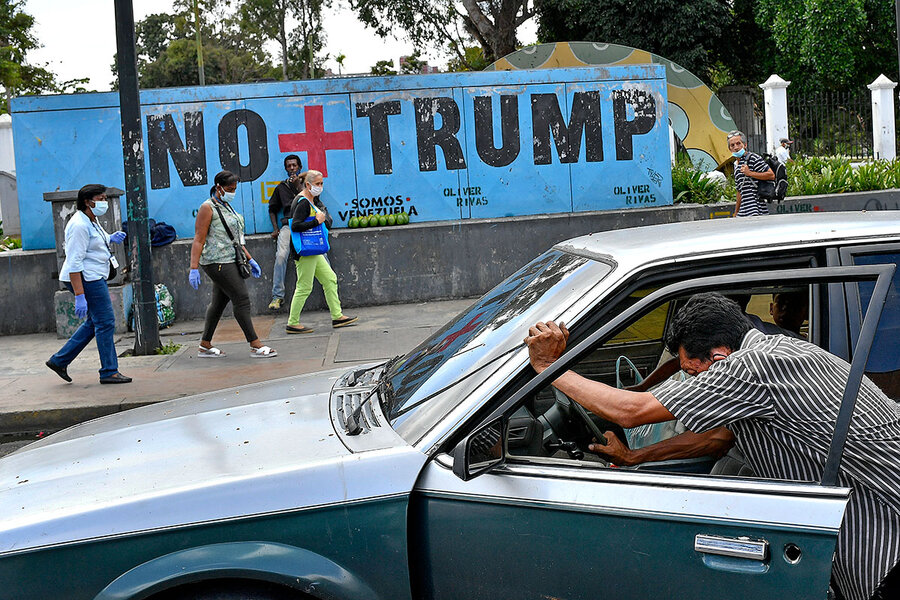 “I sincerely hope there is a revision by the Biden administration of how to think about contributing effectively to resolving [Venezuela’s] crisis,” he says.

“What is important now is to bring into the conversation our civil society,” he adds, “in all its diversity but also its unity behind improving and saving lives.”

Mr. Reyna is part of a growing chorus of Venezuelan voices and regional experts calling on the United States to redirect its focus from pressing for a quick return to democratic rule to addressing a humanitarian crisis that has slashed average life expectancy, stunted children’s growth, fed spiraling levels of violence, and prompted more than 5 million Venezuelans to flee their homeland.

Since Mr. Maduro took office in 2013, the once high-flying oil-based economy has shrunk by two-thirds while the political opposition has been further marginalized.

And the Maduro government’s intimidation campaign against human rights activists, journalists, and even food and health providers who dare offer an alternative to meager government programs is “continuous and increasing,” according to a report last week by United Nations human rights experts.

An element of the emerging perspective is that while the political opposition the U.S. has traditionally worked with is weakened and deeply divided, Venezuela’s civil society – a panoply of nongovernmental organizations, unions, and business groups – is if anything stronger, more diverse, and more effective in addressing people’s needs than at the outset of the country’s downward spiral.

The thinking is not so much to abandon Venezuela’s political players as it is to work more closely with the groups that are most effective now at improving and indeed saving lives. The objective is a strengthened society that has the energy and awareness to join in delivering political change in the future.

“With the formal political space so stuck, it’s increasingly the various actors of civil society who are coming together to address people’s real problems and to consider the big questions like ‘How do we move forward from here?’” says Michael Camilleri, director of the rule of law program and a Venezuela expert at the Inter-American Dialogue in Washington.

“It’s not directly getting back to a governance that works,” he adds, “but it injects a little pragmatism and energy into a political environment that has been exhausted in the last six months. It offers something for the Biden administration to work with and build on.”

In its first month the Biden administration has given few hints as to its approach to the Western hemisphere’s most acute and vexing crisis.

Secretary of State Antony Blinken has thrown cold water on speculation that the new administration could move to quickly enter talks with the Maduro government. At his Senate confirmation hearing in January, Mr. Blinken said the Biden administration would continue to recognize opposition leader Juan Guaidó as the country’s legitimate interim president.

But he also said the administration would review the myriad sanctions the Trump administration imposed on Venezuela and consider boosting humanitarian aid.

And when White House Press Secretary Jen Psaki said at one of her first daily briefings last month that the new administration “will focus on addressing the humanitarian situation … and reinvigorating multilateral diplomacy to press for a democratic outcome,” it buoyed those Venezuelans who had concluded that former President Donald Trump’s “maximum pressure” approach only hardened Mr. Maduro’s repressive actions and worsened average Venezuelans’ lives.

Still, one problem for the Biden administration is that the youthful Mr. Guaidó is now just a shadow of the charismatic leader who two years ago captured the heart of a nation devastated after 20 years of the populist socialism introduced by Mr. Maduro’s late predecessor, Hugo Chávez.

After appearing in early 2019 to be on the verge of wresting power from Mr. Maduro, and then winning the support of more than 50 countries including the U.S. as Venezuela’s legitimate leader, Mr. Guaidó has seen his national and international support dwindle as Mr. Maduro has consolidated power.

For some Venezuelan activists, the important question for the U.S. is not whether it sticks with Mr. Guaidó or abandons him, as some European and Latin American countries have, but how it can take a more holistic approach to addressing the country’s crisis.

“What people are talking about now is the idea of the ‘nexus,’ how international assistance can help to link humanitarian to development to peace-making efforts,” says Roberto Patiño, whose network of 240 soup kitchens in 15 Venezuelan states feeds thousands of children while building community skills.

“The U.S. should think more about how to support civil society in empowering the Venezuelan people and make that a strategic pillar of a new approach,” he adds. “That would be a key difference from the Trump administration.”

One example of how that might work: The Biden administration should lift the Trump sanctions on Venezuelan crude oil sales, many experts say, and instead allow for “swaps” of oil sales for imports of diesel – an essential fuel in Venezuela for public transport and food production. That could correct how sanctions designed to punish the government instead deepened average Venezuelans’ hardships.

Mr. Patiño knows that speaking of “empowering” people risks placing him in the government’s crosshairs. Already in November his Feed the Solidarity charity was raided and an arrest warrant for “political subversion” forced him into hiding for weeks.

What earns these civil-society organizations the wrath of the government, they argue, is their model of empowerment that aims to build community skills, responsibility, and independence. “From my perspective that frightens the government,” Mr. Patiño says, “because the regime is all about social control and keeping people dependent on them.”

But this goal of empowering people is exactly why the Biden administration should shift policy to deepen its work with civil society, he says – because that would align the U.S. more closely with shared values of human rights, personal development, and democratic governance.

“What we in Venezuela and others outside wanting to help have to understand is that any resolution to this crisis must include agreement that all the factions inside the country have a future here,” Mr. Patiño says. “Any solution for Venezuela has to put both the problems and the dreams of the Venezuelan people at the heart of the discussion,” he adds, “and that means including all political factions and perspectives.”