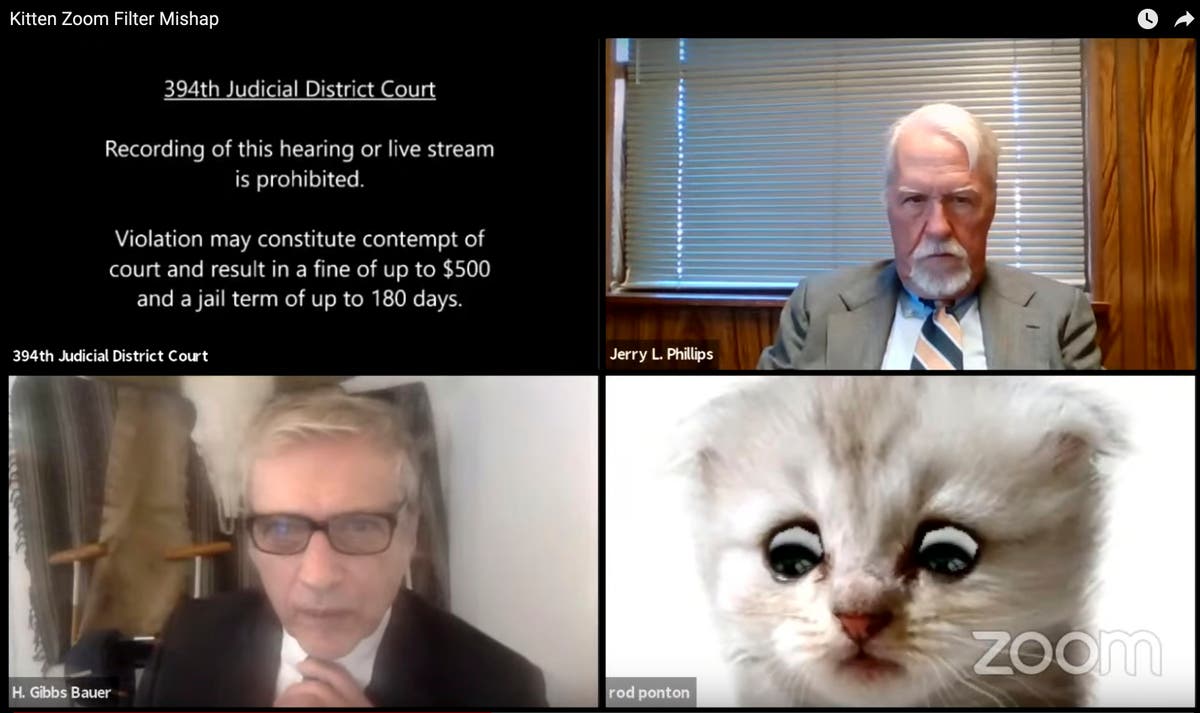 A lawyer being forced to deny he is a cat has become of the internet’s most popular videos.

But Rod Ponton, the Texas attorney who was forced to clarify that he was actually a human, is not the first person to be struck by an accidental webcam metamorphosis into a cat.

In fact, the filter has a rich history of arriving unwanted into people’s video chats. And as Mr Ponton struggled to remove it in front of the judge, he was part of a long line of people who have found themselves unable to turn themselves back into humans.

While users can turn a version of the feature on relatively easily nowadays, the filter is actually many years old, and hidden within the software of specific kinds of computers. It appears to have been a problem for at least 11 years, and maybe much longer.

A post on the blog ChemBark, written by academic chemist Paul Bracher, appears to describe an early version of the same issue. He posted the story in 2013, detailing an incident during a job interview that happened a year before.

He described a morning spent preparing for the interview, getting changed and logging onto Skype with the intention of impressing the university panel that would decide whether he had the job. He noted that Skype was an unusual occurence: while many job interviews begin with a phone chat, he was asked to do video for the first time that year, and had last used Skype two months before to speak with a friend in China.

As the interview began, however, everything went wrong, in a series of events that will now be familiar to Rod Ponton and everyone who has followed his story.

“While I could see the search committee just fine, they saw me as a sad kitten,” Professor Bracher wrote. “I know this because (i) I could see my feed in a small box on my screen, and (ii) the professors on the committee were looking at their screen and chuckling.

“What’s worse is that every time I talked, the kitten’s mouth would open and close. I was mortified.”

As he tried to fix the issue, he ran into the same problems that Mr Ponton must have faced. The cat filter appeared to have turned itself on, he said, since nobody else uses his computer; none of the menus within Skype seemed to offer the option to turn it back off again.

Professor Bracher was forced to switch his Skype to audio interview for the remainder of the interview, and to send an email apologising to the chair of the committee after it had finished. In the end, he did not get the job: “Who knows what could have been were it not for the kitty interview?”

But he did, in the process, find a solution. The issue was not Skype, he realised, but instead something in the webcam software on Dell computers.

Many other users had the same issue. A post on Skype’s official forum, also from 2012, was titled “My camera shows kitten instead of me” and reported the same problem.

“I’ve had no problems at all with skype until tonight,” it read. ” When I made a call, the connection was fine except that after a few seconds of showing me as it should, it switched to a kitten avatar instead of me.”

The poster, identifying themselves as Ken, told what is now a familiar story: they had “looked through all the settings and Q&A’s and can’t find anything like this”. “How do I get it back to a video of me?”

Responses were initially unhelpful, with one user suggesting that the person might not really be seeing themselves as a kitten but might have confused it with their avatar, and another posting that “I am having the same issue…it just shows this kitten….does any know how to get rid of the kitten”.

Eventually, however, both the forum post and Professor Bracher came upon the same blog post, which offers an explanation of what happened, as well as something of a solution to stop it happening again.

Written by Carsten H Pedersen, a programmer, it was published in 2010 and titled: “Skype: Remove The Cat”. And that’s exactly what it did.

“It took us a while to figure out where this was hidden, so I thought I’d post it here…” he wrote.

“A member of my family has for a long time been battling with a ‘Webcam Avatar’, a stupid white cat that replaced his video feed in Skype. Apart from not knowing how it had entered his computer in the first place, whatever he did to reset his webcam settings, it would keep reappearing once Skype was restarted.”

According to the comments on that same post, it could have gone worse. One user initially thought it was a malware attack and then tried to change the filter to ET’s face to make it less embarrassing: “but the woman I was talking to started screaming, literally, that it’s red eyes were glaring and scaring her…she asked me to quit and I ended the call”.

Mr Pedersen discovered – perhaps for the first documented time – that the cat was not an issue with Skype, but with software more hidden and fundamental in the computer itself. It is installed by Dell when the computer is put together, he found, which explains why it would come up not just on Skype but on Zoom and presumably any other program that relied on the camera.

He said that removing the application – known as “Live Cam Avatar” – would fix the problem. That could be done by going into the Control Panel and choosing the add/remove programs option, from where it could be deleted.

It also appears that the avatar can be turned off from within the tool itself, according to others who struggled with the issue. Opening the app also gives the option to turn off the avatar, though it does not seem to be obvious, and means clicking on the blank setting within the applications options.

The discovery of the fix brought joy to those who have found Pedersen’s blog in the years since, one of whom said they had been suffering with the unwanted cat for more than a year. “I SO NEEDED THIS!!! CAT WAS ANNOYING!!!THANKS MUCH!!!!,” wrote one user; “many thanks, cute cat [but] he don’t belong in my chat”, another said.

Mr Ponton can hopefully take solace in the fact he is not the first person to be confused by the unwelcome feline visitor, and not the first to struggle to remove it. And, thanks to Paul Bracher, Carsten H Pedersen and the many others who went before him, he will now hopefully know the somewhat complicated way to turn back into a human.