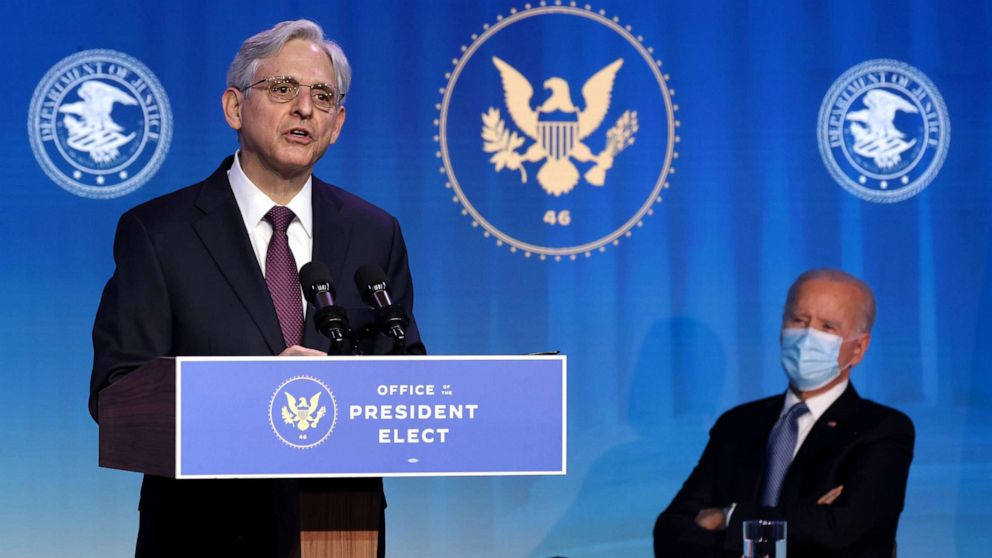 They are questions President Joe Biden and his White House haven’t wanted to answer — some awkward, some deemed improper and many of them deeply political, no matter how much politics isn’t supposed to matter.

On Monday, it falls to Judge Merrick Garland to start to answer them. Biden’s nominee for attorney general faces questions before the Senate Judiciary Committee on cases and topics that are largely inherited but no less relevant because of that.

Garland himself is cognizant of the larger significance of the moment, even leaving aside the off fact that this same committee refused to even consider his nomination to the Supreme Court five years ago.

His prepared testimony calls it a “fitting time to reaffirm” that the attorney general serves not a president, but the law and “the people of the United States.” And the man who oversaw prosecutions of the Oklahoma City bombing has another case of domestic terrorism on his mind.

“If confirmed, I will supervise the prosecution of white supremacists and others who stormed the Capitol on Jan. 6 — a heinous attack that sought to disrupt a cornerstone of our democracy: the peaceful transfer of power to a newly elected government,” Garland plans to say.

Whether Garland’s portfolio will also include a prosecution of former President Donald Trump — because of Jan. 6, or any number of this issues — will be of high interest to the committee. So too will questions about Hunter Biden and the continuing inquiry into the origins of the Russia probe, with the Durham investigation gifted to Garland by former Attorney General William Barr.

“You won’t work for me,” Biden told Garland last month, at the event where he announced his nomination.

But starting with his confirmation hearings, Garland will be in the position of effectively speaking for the Biden administration on some of the most politically charged issues in Washington.

Nearly a year after Americans first felt the aftershocks of the global spread of the pandemic, the nation is facing the devastating milestone of 500,000 COVID-19-related deaths. Living amid shuttered businesses and closed schools has become an overwhelming experience for many, and for others, getting vaccinated continues to be an unreachable goal that was exacerbated in some parts of the country due to bad weather.

People want to see a light at the end of the tunnel and lawmakers, as well as health experts, are under pressure to deliver hope. Still, questions remain: when will the end be in sight and how will it happen?

Over the course of several Sunday show interviews, Dr. Anthony Fauci agreed with Biden’s assessment that the nation would largely return to normal by Christmas. He also recognized the promising downward trends in COVID-19 cases, but issued a warning for Americans to not get too comfortable, too quickly.

“The one thing we don’t want to do is to be complacent that it’s coming down so sharply that now we’re out of the woods because we are still at a baseline of daily infection that’s quite troublesome,” the nation’s top infectious disease expert said.

Meanwhile, Biden continues to face hurdles in passing his $1.9 trillion American Rescue Plan. As progressive Democrats hammer the need to include a $15 minimum wage in the final version of the bill among other discrepancies, Republicans remain critical of the president’s first major piece of legislation going through on a party line vote.

With progress toward a final compromise on the line ahead of the expiration of key unemployment benefits on March 14, the president heads into closing his first month in office by continuing to balance intraparty disagreements against widening partisan divides.

The TIP with Will Steakin

Trump’s effort to return to the national stage following the Capitol attack on Jan. 6, carried out in his name, will continue this week when he takes the stage at the Conservative Political Action Conference in Orlando, Florida, next Sunday.

Trump’s speech is set to focus on the future of the Republican Party and Biden’s immigration policy, a source familiar told ABC News. However, Trump very rarely sticks to the script and if his blitz of friendly TV interviews last week — where he continued to push false claims that he won the election — are any indication, the former president is still inching to relitigate his 2020 loss.

And it’s not just Trump who’s seemingly stuck fighting the last political battle — despite some in the Republican party gearing up for the 2022 midterms, CPAC will be stacked with panels looking back at the 2020 election including “Shining a Light on the Left’s 2020 Shadow Campaign,” hosted by former Trump campaign aide David Bosse, who briefly led the effort to overturn the results, and “The Left Pulled the Strings, Covered it Up, and Even Admits It.”

As Congress looks to set up an independent outside panel to investigate the Capitol siege, Democrats and Republicans both have pointed to the 9/11 Commission as a model of bipartisan cooperation. But 20 years later, veterans of the commission’s investigation into the 2001 terror attacks worry that it will be challenging to keep politics out of an inquiry into the Jan. 6 attack that led to President Donald Trump’s unprecedented second impeachment, on charges he incited the riot.

ABC News’ “Start Here” podcast. Monday morning’s episode features ABC News’ Trevor Ault in Houston, who explains why the water crisis is far from over in Texas. ABC News’ Aaron Katersky tells us why New York Gov. Andrew Cuomo has come under fire for his handling of nursing home COVID data. And ABC’s “Nightline” co-anchor Juju Chang has more on the recent string of attacks on elderly Asian Americans. http://apple.co/2HPocUL