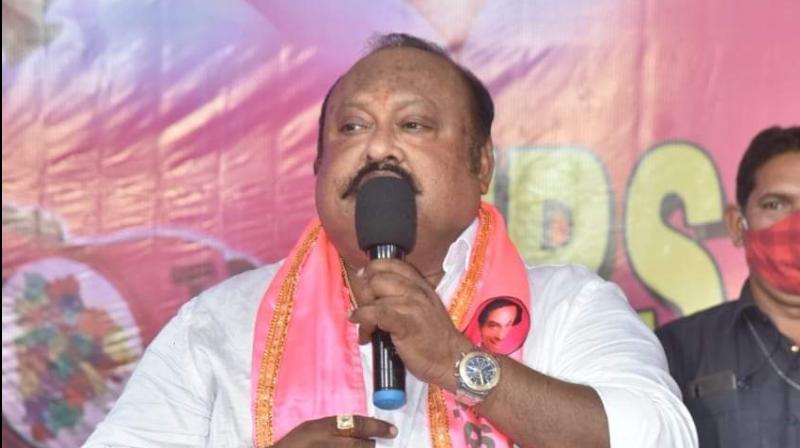 Hyderabad: In a rare event, prioritising his land claims over loyalty to his government and party, Gangula Kamalakar, Telangana state minister for civil supplies and BC welfare, approached the High Court against his own government to protect ownership of a disputed 15 acre-property in the outskirts of Karimnagar city.

After hailing the new Revenue Act, brought into force by Chief Minister K. Chandrasekhar Rao and Dharani portal initiative in several public fora as “revolutionary” and “foolproof”, the minister challenged the “illegal and arbitrary decision” of the government to include in Dharani portal, a disputed property from the prohibitory register.

The matter is listed for hearing before Justice P Naveen Rao on Tuesday.

The minister pleaded with the Telangana High Court to order the deletion of the property, situated in survey number 126 of Khazipur village of the Kothapalli Mandal in Karimnagar district from the prohibitory list. He made Chief Secretary Somesh Kumar, the district collector of Karimnagar, the State Wakf Board and other revenue officials as respondents.

Inquiries by Deccan Chronicle revealed that the State Wakf Board has been claiming ownership of the land for a long time. Some individuals have also approached the local revenue authorities for issuance of ‘Ownership Right Certificate (ORC)’, treating the property as inam land. Mr G. Kamalakar, as an MLA, made a representation to the district authorities for issue of the ORC.

While the Revenue Divisional Officer rejected the plea for an ORC, the joint collector allowed the same in favour of individuals. Subsequently, and thus, Kamalakar became the owner of the property.

The State Bank of India disbursed a loan of `95 lakh, after obtaining a mortgage of 15 acres through a registered mortgage deed (9115/2014). The property was released from mortgage (8027/2019) after the loan was repaid.

Meanwhile, the government, while switching over to Dharani portal, changed the registration process, and the property over which the minister was claiming ownership, got included into the prohibitory register, by virtue of its mention in a Wakf Gazette.

The minister also brought to the notice of the Court the inaction of the Wakf Board in taking steps to de-notify land from the list of Wakf properties in the Gazette notification, based on the report of the district collector in letter no F1/4675/2016 dated May 8, 2020.

The TRS minister even accused the KCR-led government of “violating Article 14 of the Indian Constitution”.

When contacted, the minister said about 70 acres in the village were owned by small and marginal farmers since 1953, as per local revenue records. But the Wakf Board has included the survey number in the list of properties owned by it, he said.

Farmers have been agitating against Wakf the Board for a long time. After I purchased the land in 2008, I have also been petitioning the government, he said.

He added that he approached the High Court, which alone has powers to decide on the Wakf Gazette.