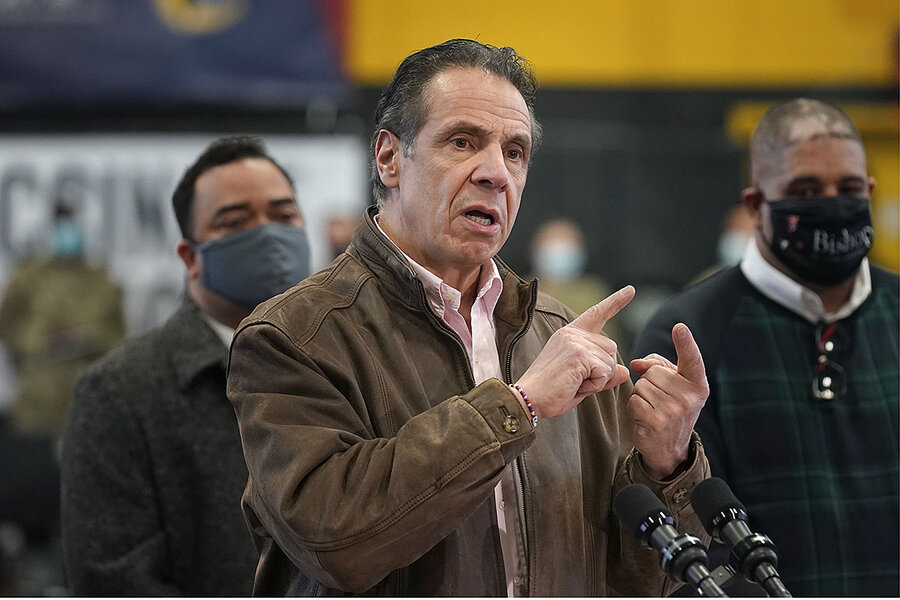 New York Gov. Andrew Cuomo, the three-term Democrat who has wielded power in one of the nation’s most influential states for over a decade, has long been known for his bare-knuckle, backroom style of political leadership.

In many ways, the art of intimidation and humiliation has long been part of New York’s “three men in a room” traditions, in which political power tilts toward the dealmaking of the governor and the leaders of the state Senate and Assembly.

But over the past week, even as revelations about Governor Cuomo’s handling of the number of COVID-19 fatalities at New York nursing homes upended his national reputation, the story took a dramatic turn. Members of a newer and younger cohort of state legislators began to push back against the well-known pit bull tactics of New York’s governor.

Filled with plotlines of hubris and reversals of fortune, the story of New York’s governor over the past year has almost been Shakespearean. And it follows on the heels of the defeat of former President Donald Trump – another politician from New York with a pugnacious brand of swagger, famous for dealmaking and demanding personal loyalty – who was brought down by the pandemic. The once-in-a-century event has been so big that its attendant problems have stymied politicians of both parties, from managers like Massachusetts Republican Gov. Charlie Baker to technocrats like California Democratic Gov. Gavin Newsom. But that particularly bellicose style that brought both Mr. Trump and Mr. Cuomo to power has come under fire from a new generation who are not nostalgic for the 1980s.

One year ago, Governor Cuomo was becoming as popular as he’d ever been, his daily briefings from the early epicenter of the COVID-19 crisis bipartisan must-see TV. Projecting a leadership style both empathetic and urgent, he inspired celebrity crushes, songs and memes on social media, and a state counterpoint to what many saw as the federal government’s inadequacies – a boon to the vaunting ambition of any would-be presidential aspirant.

“Everyone in New York had relatives and friends calling from all over the country, saying, ‘Wow, your governor,’” says Christina Greer, professor of political science at Fordham University in New York.

But at the end of last month, New York’s progressive attorney general, Letitia James, released a report that found the governor had been undercounting the number of COVID-19 deaths at nursing homes by about 40%, leaving out those residents who died in hospitals. In addition, under his pandemic management, some patients who were diagnosed with the virus were sent back, which some believe may have contributed to the death toll at New York’s nursing homes.

Governor Cuomo had in fact touted New York’s low rate of nursing home deaths compared to the rest of the country, a rate based on the incomplete numbers. Then, when confronted with the way his administration categorized its data, he also brusquely dismissed the criticism: “But who cares? [A percentage] died in a hospital, died in a nursing home,” Mr. Cuomo said. “They died.”

In the past week, both the FBI and the U.S. attorney in Brooklyn have opened preliminary investigations into how the Cuomo administration handled the data from nursing home deaths. A Marist Poll released Tuesday found that more than 60% of registered voters believe the governor either acted unethically or illegally with regard to nursing homes.

The controversy cut straight to the heart of the kinds of leadership skills that made him so celebrated during the early days of the pandemic.

“It was as if, OK, you misled us about nursing homes, one of our most vulnerable populations: our bubbies, our nannas, our poppops,” says Professor Greer. “What else are we being misled about? And his answers raise a lot more questions … and I don’t think he’s interested in answering them.”

But the crisis deepened even more when Mr. Cuomo lashed out against Assemblyman Ron Kim, a Democrat from Queens, who had been a critic of the governor’s handling of nursing home data for months. In public and in private, the governor exploded in a way that long-time observers of New York politics found both familiar and in many ways unremarkable.

“Over the past 35, 40 years, almost everyone has had some kind of run-in with that side of his personality,” says Ken Sherrill, professor emeritus of political science at Hunter College in New York, noting the governor has had an “enforcer’s” mentality since he was the campaign manager for his late father, the former Gov. Mario Cuomo.

On Wednesday, a former aide detailed allegations of sexual harassment and intimidation against the governor in an essay on Medium. Mr. Cuomo has denied the allegations, and on Wednesday his spokesman characterized them as false in a statement to The New York Times.

A number of Democratic legislators have begun to stand up to the governor’s strong-arm tactics in ways not necessarily seen in the past, and in some ways signaling less tolerance for the older ways of applying pressure to keep coalitions in line.

And despite his reputation as a deft politician, his aggressive, if not abusive, ways of intimidating those who oppose him is out of step with contemporary movements to curb abusive behavior in the workplace – including in professional sports, where a younger generation has rejected the drill sergeant style of leadership.

Senate Majority Leader Andrea Stewart-Cousins rebuked the governor this month in what observers say was an unusually bold statement criticizing his handling of the nursing home data. A group of 14 Democratic legislators, including Assemblyman Kim, asked the legislature to strip Governor Cuomo of the emergency powers issued during the pandemic.

“After four years of presidential bullying and a toxic White House workplace, many Americans – particularly Democratic voters – seem to have had enough of petulant, combative public officials,” says Stephen Farnsworth, director of the Center for Leadership and Media Studies at the University of Mary Washington in Fredericksburg, Virginia.

“Governor Cuomo, once seen as a reassuring voice of professionalism thanks to his effective handling of COVID, now seems like an out-of-touch Albany Machiavelli, quick to employ tantrums and cover-ups,” he says.

The progressive wing of the Democratic party, too, has promoted an ethos that values cooperation and consensus, eschewing hierarchies in general and resisting political structures that concentrate power in individual party leaders.

“There is a new cohort of people who are in power in Albany now, particularly people of color,” says Professor Sherrill, noting that women and people of color (all Democrats in this case) together comprise a narrow majority in the 63-member state Senate and 75 of the 150 members of the Assembly – a dramatic change from just a few years ago when white men comprised the demographic majority of both chambers.

“They are a generation younger than the people who were in power before, and they are not people who would just get used to ‘Andrew being Andrew’ the way the previous generation did,” Professor Sherrill says.

In many ways, the pandemic only masked the profound transformation of the New York legislature.

Governor Cuomo has long governed as a fiscal conservative, demanding a restrained budget each year and generally resisting the kinds of progressive proposals that cost money.

“He’s compensated for this with his competence and by having enough liberal positions that people didn’t oppose him as much as they might oppose someone who likes to push people around and who does settle scores,” Professor Sherrill says.

Laws on liberal priorities such as marriage equality and gun control “provided him cover with the Democrats, despite his not having a left wing economic approach,” she adds. And Governor Cuomo was able to find a useful and powerful middle ground between what had long been a Republican-controlled Senate and Democratic Assembly.

This is no longer the case, and Democrats now comprise a supermajority in both chambers, including a generation of progressives eager to spend more and unwilling to tolerate the politics of bullying.

“People believe this is not the way that a democracy should have to work,” says Professor Greer. “There are other ways where adults, who ostensibly have the people in the forefront of their minds, should be able to articulate our vision in a way that’s not damaging to our colleagues.”

“We’ve seen him rise like a phoenix from the ashes before,” she continues. “But if this iteration of Andrew Cuomo seemed to be very strong, very powerful, especially after he became this national figure during COVID, all that goes away, right? If you’re saying ‘mission accomplished’ and we find out that you’re cooking the books, all of that goodwill just goes away.”