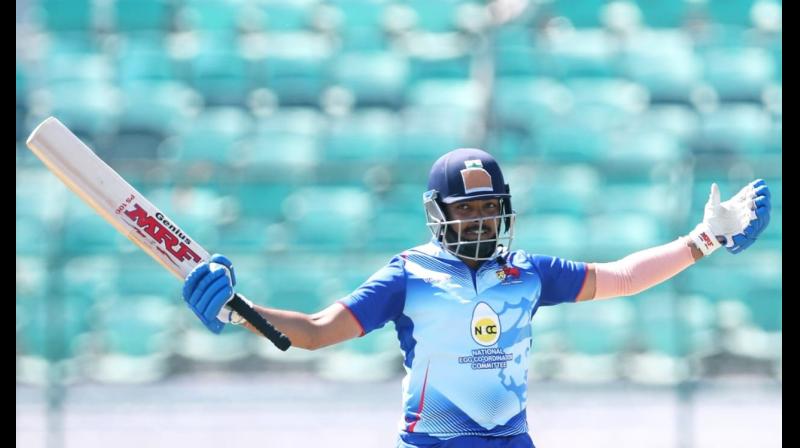 The 21-year-old Shaw, who has played in five Tests and five ODIs, broke the earlier record of the highest individual score held by Sanju Samson (212 not out against Goa in 2019).

This was the maiden List-A double hundred for Shaw, which he got in 142 balls. Shaw hammered 31 fours and five sixes during his onslaught. He also became the eighth Indian to score a List A double hundred.

This was the fourth double hundred in the history of the Vijay Hazare Trophy.
Also, this was Prithvi's second century of the tournament after his unbeaten 105 in the lung-opener against Delhi.

This was also the highest score by a captain in List A cricket in the world after the youngster surpassed the unbeaten 222 by Graeme Pollock versus Border in East London.

For the record, the existing highest individual List A score is 268 by Ali Brown.
Puducherry's decision to put Mumbai in to bat backfired badly as Shaw and Suryakumar Yadav (133 off 58 balls) toyed with their bowling attack at the Sawai Mansingh Stadium and post a mammoth 457/4.

Leg-spinner Prashant Solanki (5/48) then picked a five-for as Mumbai bundled out Puducherry for 224 to register their third win on the trot.

Shaw and Yashasvi Jaiswal (10) added 58 runs for the first wicket to lay the foundation. After Jaiswal was dismissed, Shaw found an able partner in Aditya Tare (56, 7×4) as the duo stitched a 153-run stand for the second wicket. Tare played the perfect second fiddle to Shaw.

Suryakumar, who came in at No. 4, was in his elements, hitting 22 fours and four sixes. He and Shaw added 201 runs for the third wicket stand and helped Mumbai go past the 400-run mark.

Puducherry were never in the chase as Solanki ran through their middle and lower order and was superbly aided by pacers Shardul Thakur (2/31) and Tushar Deshpande (2/53).

For Puducherry, skipper Damodaran Rohit top-scored with a 63, but it was Mumbai, who dominated the game throughout.

Mumbai also settled scores as they were humbled by Puducherry in the Syed Mushtaq Ali Trophy, on their home soil.