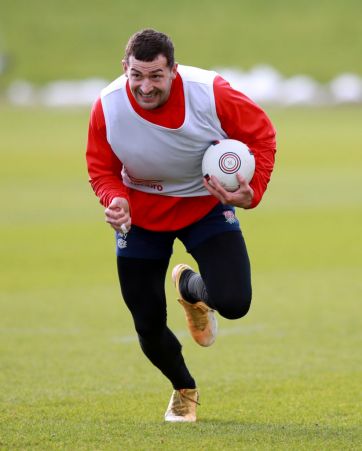 Jonny May during a training session, © PA Wire/PA Images

Jonny May admits England’s deficiencies in attack have been masked by the success of their pack and defence in grinding out victories.

May insists the Guinness Six Nations champions want to “really give it a good go” against Wales on Saturday after their shortcomings were brutally exposed in the Calcutta Cup mauling by Scotland that opened their title defence.

A more ambitious approach was taken in round two when spirited Italy were swept aside and May wants that enterprise to continue at the Principality Stadium knowing that last year’s eight-Test winning sequence was deceiving.

“We’re aware that we haven’t shown the best of ourselves yet. So there is that edge,” May said.

“It is not a nice place to be when you know, as a team, there are all those moments individually that you are not happy with. It makes you challenged and uncomfortable.

“But that’s where we’re at and why we’re grateful for an opportunity against a strong Wales side to go out there and really give it a good go.

“It’s probably been creeping up on us. We have been working hard on our attack and it didn’t quite go right in the autumn, but when you’ve got a very dominant set-piece and a brilliant defence, you can get away with winning games and it got brushed under the carpet.

“Then you need another part of your game to shine through and get you out of trouble or find a way, which was our attack, but our attack was poor.

“Our attack was poor against Scotland and that’s what really shone the light on it. It was a bit of a moment where we got smacked.

“And it was like, oh OK, that’s where we are. And there was a shift against Italy and we just want to keep building on that now.”