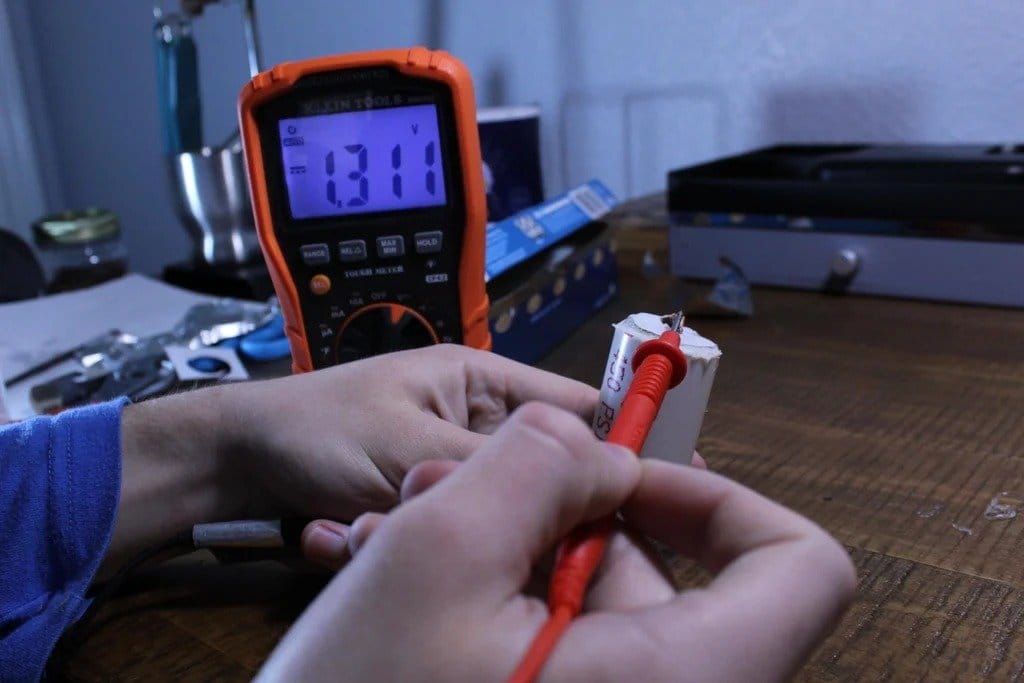 There are many ways to make homemade batteries. Unfortunately, most homemade batteries are either useless or potentially dangerous and difficult to make. Lemon and potato batteries are generally very weak and require perishable organic plant material as material, lead acid batteries contain highly toxic and corrosive chemicals, etc.
This battery is made from very simple and readily available materials and has enough power to power the devices. When traditional batteries are not available this battery will be an excellent emergency source of electricity. In addition, it can be easily recharged from almost any DC source, it is very lightweight and, unlike the more common aluminum-air batteries, does not require airflow to operate.
Tools and materials:
-Aluminum foil;
-Salt (potassium, calcium or sodium chloride will work, but bicarbonates, carbonates and hydroxides will not);
-Source of a weak metal (cans or copper wire/tubes are a great option);
-Paper (writing paper, paper towel or toilet paper;
-PVA glue;
-Water;
-PVC-pipe;
-Glue gun;
-Multimeter;
Step one: design and theory
The principle of operation of batteries is based on a chemical reaction known as a redox reaction. In a redox reaction, one substance is oxidized (loses an electron), while the other is reduced (acquires an electron). Pretty simple. Any battery is designed in a similar way, it requires three elements, between which a chemical reaction occurs, as a result of which electricity is generated: electrodes – anode, cathode, and electrolyte.
In this aluminum-metal battery, the two halves of the battery are saturated with saline and separated a special membrane that allows only sodium and chlorine ions to pass through. Aluminum on one side begins to oxidize, while copper or steel on the opposite side tries to remain stable.
In principle, any battery or accumulator is two metal plates placed in a special chemical – electrolyte. One plate is connected to the plus, the second to the minus. As long as the battery is not touched, a stable voltage remains on it, for example, 3 or 9 V. It is worth connecting a load, a light bulb, a fan to the battery, as a current will flow from plus to minus. The voltage will begin to drop and the redox reaction will begin immediately. The electrons will begin to flow from the negative (-) plate back to the positive, thereby maintaining the potential difference between them.
Reactions are reversible (battery) and irreversible (battery). Those. in a battery, the reaction is irreversible and cannot be charged, but in a battery it is reversible and it is charged. If you connect the battery to the charger, the current inside it starts flowing in the opposite direction, that is, from “+” to “-“. And the reaction in the electrolyte also starts going in the opposite direction. As a result, the reaction product decomposes into starting materials. The battery is “charging”
Of course, this process is not endless and there will come a moment when one of the plates collapses and the chemical reaction can no longer take place.
Step two: anode
The anode must be made of a metal that is less electronegative than aluminum. Copper, steel are good choices, although copper works best. If you use the less reactive metal, lead or silver, they will not work as well. The craftsman used a short copper tube, which he twisted into a cylinder. Since this is a D-size battery, he cut the anode to the height of a regular D-cell. The diameter was slightly less than the inner diameter of the PVC pipe section from which the element body will be made. 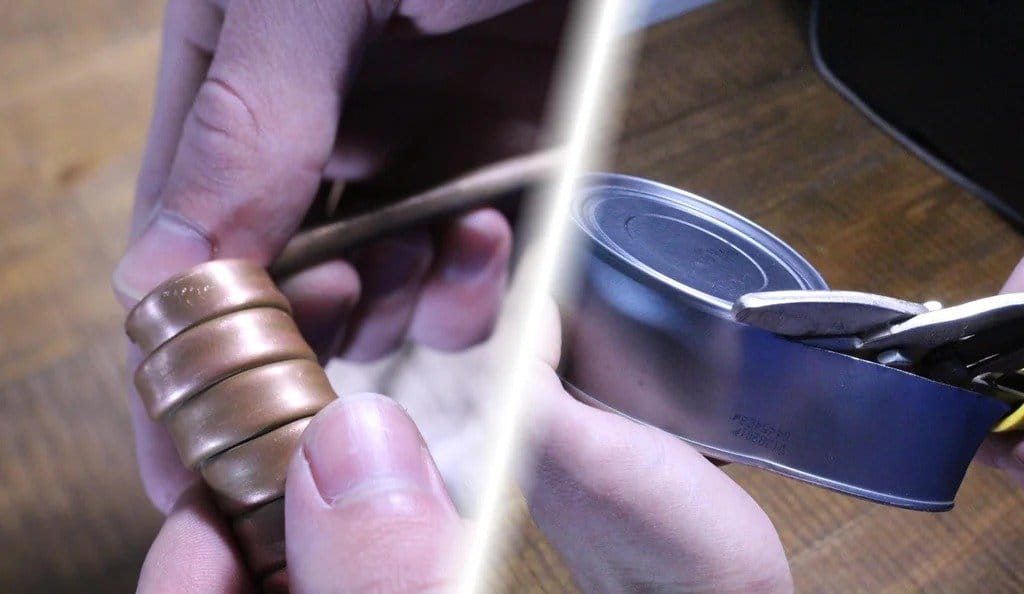 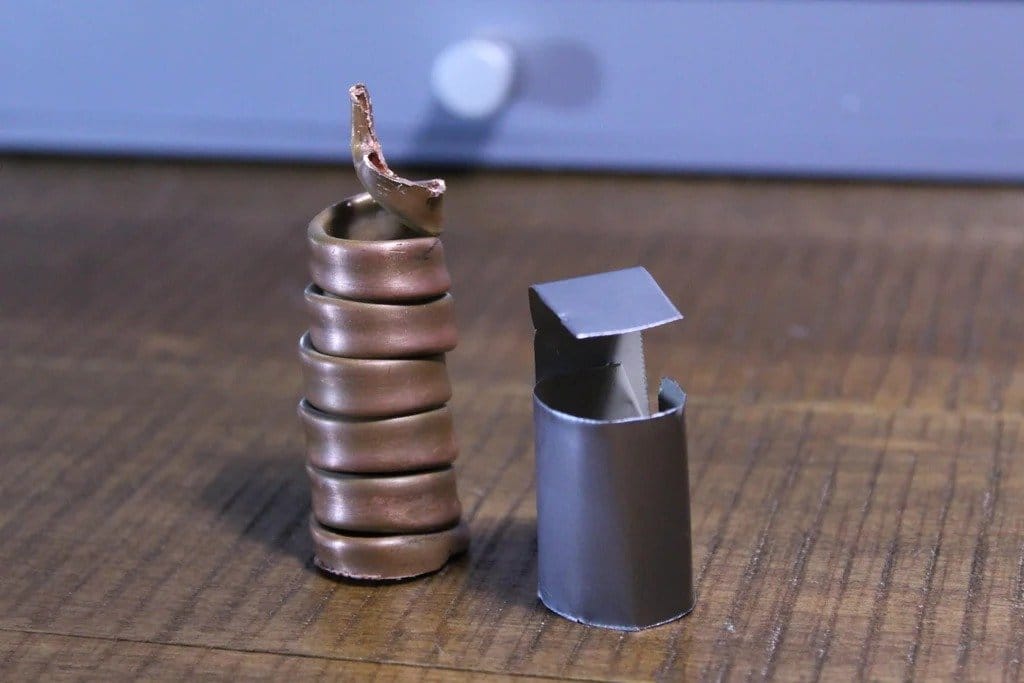 Step two: membrane
To make an ion exchange membrane, you need to wrap the newly made anode with paper or other thin absorbent material. Then submerge the structure in salt water. Instead of common salt, for example, potassium chloride, alkali metal nitrate or sulfate can be used. Calcium and magnesium salts will not work because copper and iron compounds do not react with these ions.
After soaking, you need to apply PVA glue to the entire paper part. This will prevent most of the soluble copper/iron salts from entering the cathode side of the battery. Then you need to let the glue dry and soak it again in a salt solution. A faster way to cure the glue is to immerse the glue-coated membrane in a solution of sodium tetraborate (borax), which almost immediately polymerizes the PVA glue and helps to increase its ionic conductivity. 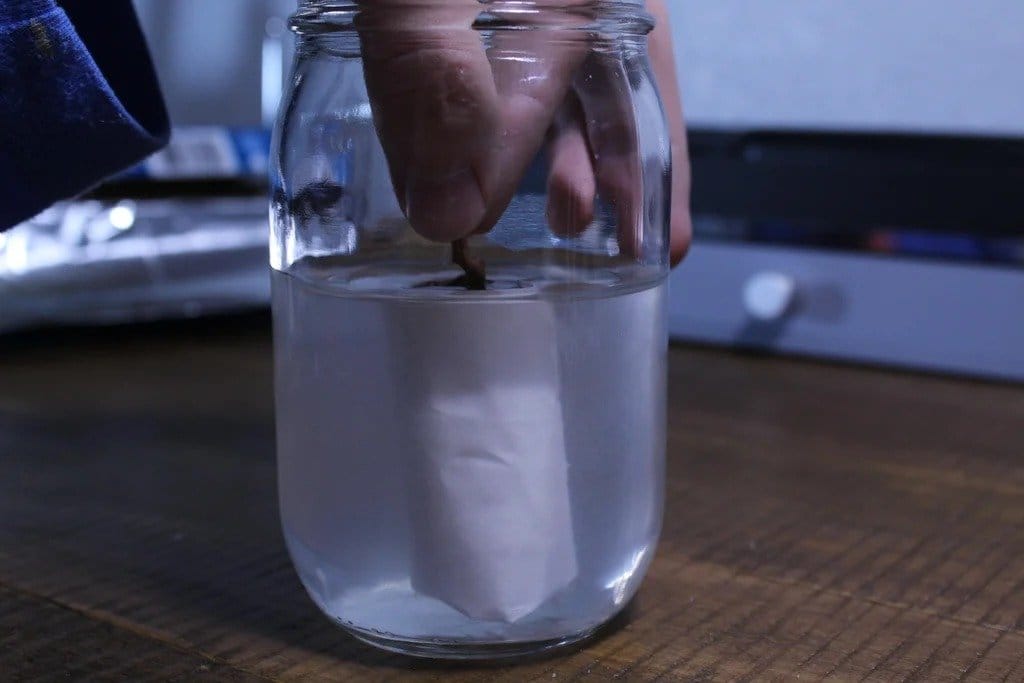 Step three: cathode
Another important part of this battery is the aluminum cathode. This is the easiest step, you just need to wrap the membrane with aluminum foil. Make sure the aluminum foil does not come into contact with the copper or steel anode.
< img class = "aligncenter" alt = "DIY rechargeable battery" src = "https://usamodelkina.ru/uploads/posts/2021-02/1614347598_1-9.jpg"/> 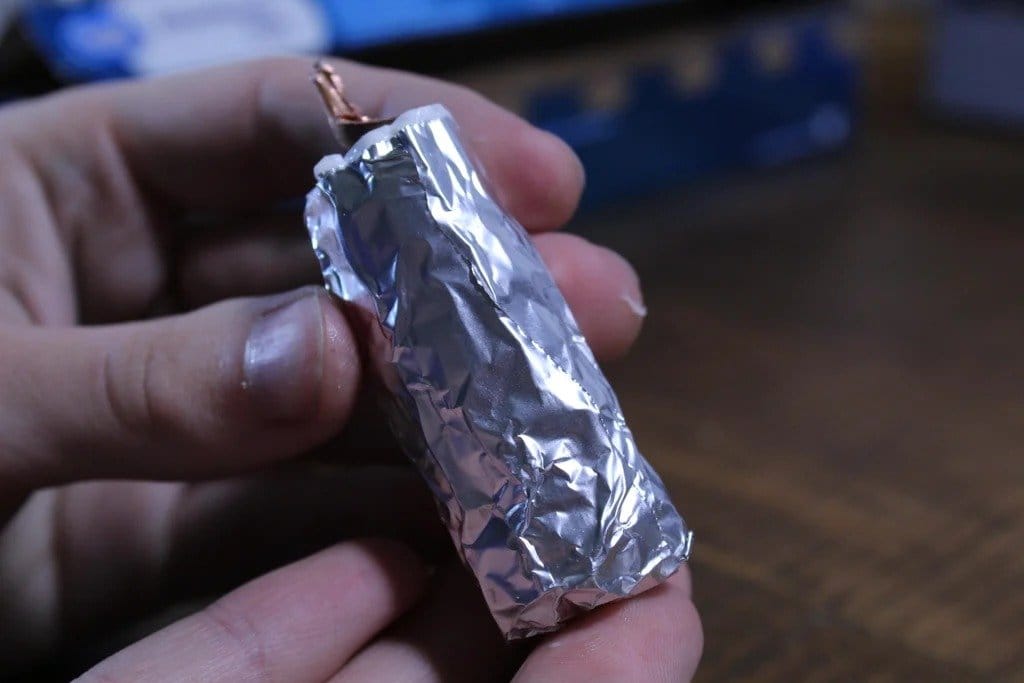 Step four: case
Now you need to cut off the plastic pipe and place the battery inside. The battery is fixed from the ends with hot glue. It is unnecessary to completely close the battery because chemical processes will take place inside and a small amount of gas will be formed. 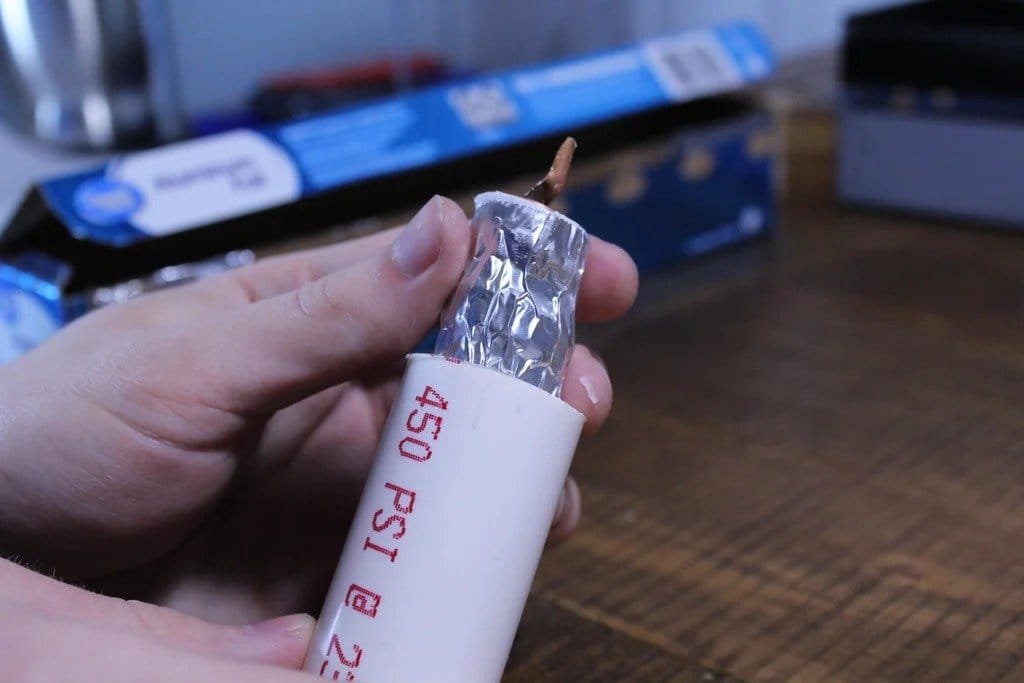 Step five: charging and checking
The battery is ready but needs to be charged. Almost any constant current source can be used as long as the current is not too high (up to 5 A). To charge the battery, you need to connect the anode to the plus of the charger and the cathode to the minus. During charging, the current will begin to decrease as the battery builds up a charge. This is a good indication that the battery is working properly. After charging, you need to check the battery with a multimeter. Using a copper anode, the master achieved a maximum voltage of 1.44V after a modest charge cycle. The maximum current he received from the battery was high for such a homemade battery – 1.2 A. By comparison, lemon or potato batteries usually only deliver a few milliamps at best. The commercial D-cell battery can deliver more than 5A amperage.
The master also conducted a test in which he compared his battery to a real 1.5 V D-cell. Both batteries were tested with a small DC motor. In this case, the current and the rotation speed of the motor were measured. Both homemade and industrial batteries performed roughly the same.
Of course, this battery is not perfect. The ion exchange membrane still allows some soluble copper salts to pass to the cathode side of the battery, where they react to form copper metal and insoluble copper oxides and hydroxides. In addition, the aluminum cathode gradually deteriorates, in fact, dissolves. But despite this, the battery is very convenient and can be easily collected and used by people in an emergency. By increasing the size of the battery, and connecting several cells in series or in parallel, it is possible to produce or store a very large amount of energy with little cost.