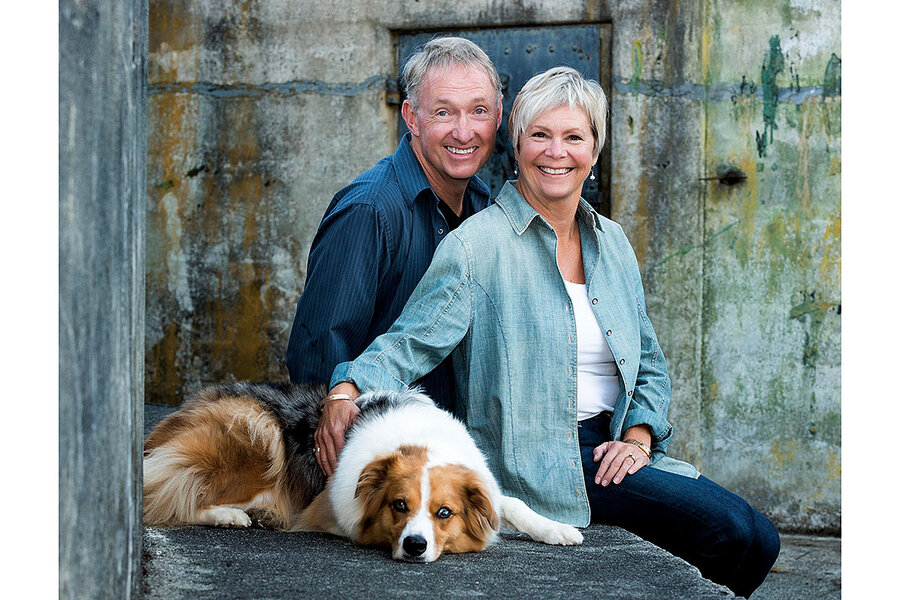 When Judi Henderson-Townsend left a Bay Area tech company to start selling mannequins, people told her she was crazy. So she named her company Mannequin Madness. (Tagline: “We work with a bunch of stiffs and we love it!”) That was in 2001. The entrepreneur says she wouldn’t have had the confidence to run an out-of-the-ordinary business when she was younger. Back then she was too concerned with the validation of others.

Since the pandemic, she’s pivoted to launch an entirely new sideline business: a studio for pet photography. She’s had so many creative ideas that she jokes that “retirement” is not even in her vocabulary.

“It’s not as if I’m trying to be younger, but I tease and I call myself a ‘senior millennial,’” says Ms. Henderson-Townsend. “Your spirit is open and receptive and likes change … that is ageless.”

Retirement, and even the years preceding it, are often considered fallow – a winding down, a twilight. But older adults are seeing an opportunity for what more are calling a “third act.” While that can mean embracing a new pastime, some are embarking upon more ambitious undertakings: starting new businesses, entering new occupations, or devoting themselves to philanthropic endeavors. In the process, they are becoming exemplars for the more than 54 million Americans age 65 and older. Like the many in Generation X who helped society understand what it meant to be single and happy after age 30, these baby boomer-and-above adults are helping their peers and communities see a range of possibilities for the golden years as longevity increases.

“The most important thing about older adults is they’re not done yet,” says Larry Samuel, author and founder of Age Friendly Consulting. “If the first act of life is mostly about education and youthful exuberance, and the second act mostly about career and family, the third act of life is about the pursuit of wisdom, self-actualization, and leaving some kind of legacy.”

In general, people are living longer than ever. Since the turn of the millennium, global life expectancy has increased at the fastest rate since the 1960s. A February 2020 report by the U.S. Census Bureau estimated that by 2060, life expectancy will have increased by about six years for the entire population. How the pandemic may affect that remains to be seen. But if the statistics hold, role models may be even more in demand.

To that end, in 2016, Victoria and David Marshall started 3rd Act Magazine to chronicle how some older Americans are blooming. One 2020 edition, for example, details how Keith Johnson took up the sport of snowshoe running when he reached 65. Now in his early 70s, he won the bronze medal for the U.S. in his division at last year’s World Cup in Japan. The individuals profiled in the magazine exemplify how to live fulfilling lives, says Ms. Marshall.

The magazine was borne out of the Marshalls’ own experience. The couple had attained their goal of retiring early. He’d left a lifelong career as an engineer at Boeing in Seattle. She’d sold her tourist-map business. They were, as Ms. Marshall puts it, “ready to ride into the sunset.” But a few years into their new lifestyle, Ms. Marshall experienced a personal crisis. She was listless and suddenly aware of age.

“I was getting sick,” says Ms. Marshall, who had previously enjoyed good health. “I needed to really change my focus around aging. And I realized that I needed a purpose.”

The search for meaningful activity underscores many third acts. But some older adults also need more money to underwrite an unanticipated period of longevity, says Elizabeth Isele, founder of the Global Institute for Experienced Entrepreneurship (GIEE) near Portland, Maine. Many in that situation start a new venture. A 2019 study by the University of Michigan concluded that entrepreneurs over the age of 50 are two to three times more likely to form a new business than take a job in the gig economy.

Older adults often possess an additional vital quality: resilience. They’ve experienced failure and learned that it’s possible to survive and come out stronger and wiser for it. That hardy pluck has enabled some older entrepreneurs to weather the COVID-19 pandemic better than younger generations that haven’t encountered strong head winds before.

“When we measure age chronologically, we’re looking back at our lives and our accomplishments,” says Ms. Isele, who founded the GIEE in her 70s. “We have to stop thinking about our experience as our epitaphs. It is what we have done in the past, but it’s also the potential to build on that. It’s our future.”

Mr. Samuel of Age Friendly Consulting echoes that idea, adding that baby boomers are changing the timeworn perception that the post-employment stage of life is an epilogue to the main body of work. “It’s a cultural pivot that will perhaps serve as their greatest legacy,” he says.

Last year, Michelle Fishburne discovered that skills she accumulated during her prior careers paved the way for an entirely new third act. The 57-year-old had been laid off and during her subsequent job search had written 86 personalized cover letters – with no responses. With her lease about to expire, the Chapel Hill, North Carolina, resident had an epiphany: She could live in her motor home.

Another idea arrived like a “lightning bolt,” she says: Why not roam the country and ask ordinary Americans about how the pandemic has changed them? Her project, Who We Are Now, is slated to become a book. Interviewing people and telling stories felt like familiar ground to the former international corporate attorney and director of public relations. She chalks up her successful pivot to “plasticity” – remaining flexible by continually challenging oneself to keep learning.

“You need to be humble to learn things that are new,” says Ms. Fishburne, who notes she has developed wisdom and grace with age. “I’m really excited to see what I’m doing 10 years from now.”

Los Angeles-based Ida Talalla is another storyteller. At age 81, she has learned how to use filmmaking equipment.

“It’s a new medium for me,” says Ms. Talalla, who was born in Kuala Lumpur, Malaysia, and has had several careers, including textile artist, educator, and environmental activist. “I’ve had the opportunity to explore art in a way I never would have expected.”

Ms. Talalla is an artist-in-residence at Echo Park Film Center in Los Angeles. With funding from groups like AARP and the National Endowment for the Arts, she and other older adults are able to work on film projects. With financial support, she bought a laptop and camera equipment. “Reflections,” her self-made autobiography, premiered at the film center in late 2019.

As a member of the advisory council for the L.A. Department of Aging, she is constantly pushing back against the idea that older people can’t or shouldn’t contribute to creative spaces.

“Seniors can do a lot of creative work. When we’re gone, what are we leaving behind?” she says. “It takes funding and effort, but why not give us the tools? Why not allow us to contribute?”

That question of legacy looms large for many older adults. At 91, however, Bostonian Sylvia Anthony isn’t thinking in those terms. She’s too busy preparing for a refresher course in real estate after renewing a lapsed license. She wants to funnel the proceeds from that job into Sylvia’s Haven, the shelter for homeless women and children that she founded at age 57.

Back then, she was newly widowed and had spent most of her life raising children. But, as she puts it, she didn’t want to sit on her haunches and retire. For a while, Ms. Anthony ran the second-largest shelter in the United States. Sylvia’s Haven now operates on a more modest scale, but its founder says the pandemic hasn’t stopped her from remaining busy. Last year, Ms. Anthony was honored by the National Women’s Hall of Fame in Seneca Falls, New York. She drove the 700-mile round trip to the ceremony by herself.

“I don’t feel old at all,” says Ms. Anthony, who has also published a memoir, “Till the End of Time.” “If you live that way, you won’t be tired. You won’t be disappointed. You will have something to live for, something that will keep you going – and you’ll enjoy every minute of it.”

Editor’s note: This story has been updated to correct the year that Judi Henderson-Townsend started her mannequin business.