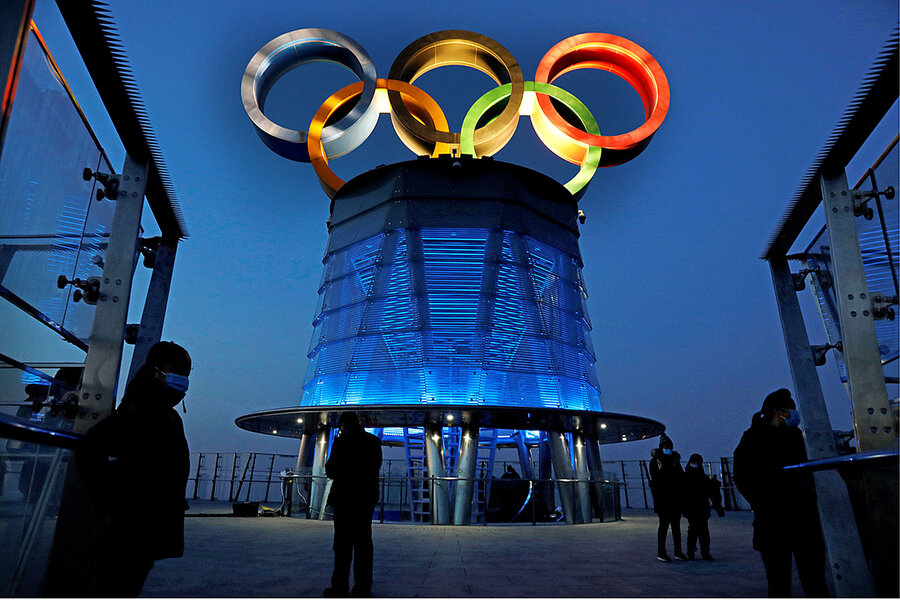 “China will seriously sanction any country that follows such a call [for a boycott],” tweeted Hu Xijin, editor-in-chief of the state-affiliated, nationalist newspaper Global Times, earlier this month. The tweet came after a coalition of 180 human rights groups – many advocating for the rights of Uyghurs and other Muslim minorities, Tibetans, and residents of Hong Kong and Taiwan – called for a “diplomatic” boycott of the games, asking governments not to send officials to attend.

Seeking to promote its authoritarian model, Beijing is advancing a concept of human rights that puts priority on a strong, state-led system meeting people’s basic economic needs – something China has excelled at in recent decades – while downplaying civil rights and political freedoms that are increasingly restricted inside China.

“In the last few years, Beijing has emphasized that economic development is the fundamental human right,” and takes precedence over other rights, says Dr. Foot, a senior research fellow at the University of Oxford’s Department of Politics and International Relations. For example, in a 2017 speech, Mr. Xi stressed that by meeting the “basic living needs” of its population and helping to lift hundreds of millions of people out of extreme poverty, China had made “a significant contribution to the global cause of human rights.”

China is also pushing for a return to more orthodox notions of the security of the sovereign state, which stress the collective over individuals – reversing the international community’s post-Cold War emphasis on protecting individuals from abusive governments, Dr. Foot adds.

By asserting the notion that human rights such as development and security must come before democracy and freedom, and that each country must promote rights based on their unique situation, China is essentially launching “an attack on universality, by saying different states are at different levels of development, and therefore we can’t expect universal adherence to rights,” she says.

Beijing has concentrated its campaign at the United Nations, where it has growing influence on the Human Rights Council in Geneva, especially after the United States abandoned the council in 2018.

Speaking before the council on Monday, Chinese Foreign Minister Wang Yi stressed Beijing’s main themes, saying “the rights to subsistence and development are the basic human rights of paramount importance.” In terms of global governance, he said, human rights should not be “used as a tool to pressure other countries and meddle in their internal affairs.”

Turning to Xinjiang, Mr. Wang cast the region as a security problem for state control, adding that China’s policies have created “social stability and a sound development momentum.” “The local people are living a safe and happy life,” he said. “Their personal freedom is never restricted.”

As early as summer 2018, a panel of U.N. human rights experts voiced concern over credible reports that China had detained a million or more Uyghurs and forced them to undergo reeducation, turning Xinjiang into “something resembling a massive internment camp … a sort of no-rights zone.”

U.N. High Commissioner for Human Rights Michelle Bachelet called on Friday for an “independent and comprehensive assessment of the human rights situation” in Xinjiang, saying her office is looking into reports of arbitrary detention, ill-treatment, and sexual violence.

The Biden administration plans to rejoin the Human Rights Council and compete with China and other authoritarian countries in setting its agenda.

Addressing the council on Monday, U.S. Secretary of State Antony Blinken called for pushing back against “blatant attempts to subvert the values upon which the United Nations is founded – including that each of us as individuals are endowed with human rights and that states are obliged to protect those fundamental rights. Those who hide under the mantle of promoting economic development while seeking to undermine human rights will be held to account,” he said, in an apparent reference to China. “We will speak out for universal values when atrocities are committed in Xinjiang or when fundamental freedoms are undermined in Hong Kong,” he added.

A more robust U.S. role may strengthen regional coalitions in defense of universal rights. But China has grown more adept at pushing back, joined by a growing number of client states, says Ted Piccone, a nonresident senior fellow in the Foreign Policy program at Brookings Institution and author of “Catalysts for Change: How the U.N.’s Independent Experts Promote Human Rights.”

“The number of countries they [China’s officials] can get on their side is really striking,” says Mr. Piccone. “The reality of China’s power in the world has changed … and China now is using that as leverage much more effectively in blocking efforts to call out their behavior.”

After decades of limited involvement in the international human rights system, China’s role has grown significantly since Mr. Xi took power in 2012. Starting in 2017, Beijing has tabled its own resolutions that push China’s model of state-led development, collective human rights, and stability. In terms of enforcement tools, China seeks to downgrade or eliminate the role of independent human rights experts and investigations in favor of quiet dialogue and cooperation between sovereign states with no role for civil society or the media, Mr. Piccone says.

Meanwhile, as calls to skip the Winter Games grow louder, Beijing is attempting to minimize the likelihood of embarrassment by warning of repercussions. The International Olympic Committee opposes a boycott, saying it only harms athletes.

The most likely outcome, experts predict, is that calls for a boycott will shine a spotlight on abuses, and may lead individual sponsors, athletes, or officials to bow out. China’s efforts to muzzle critics could backfire and keep people away, Mr. Piccone says.

“It’s a real dilemma,” he says. “When the host country is the one that is responsible for these kind of gross human rights violations … you have to ask yourself, am I enabling this regime’s behavior or standing in the world? Am I complicit?”