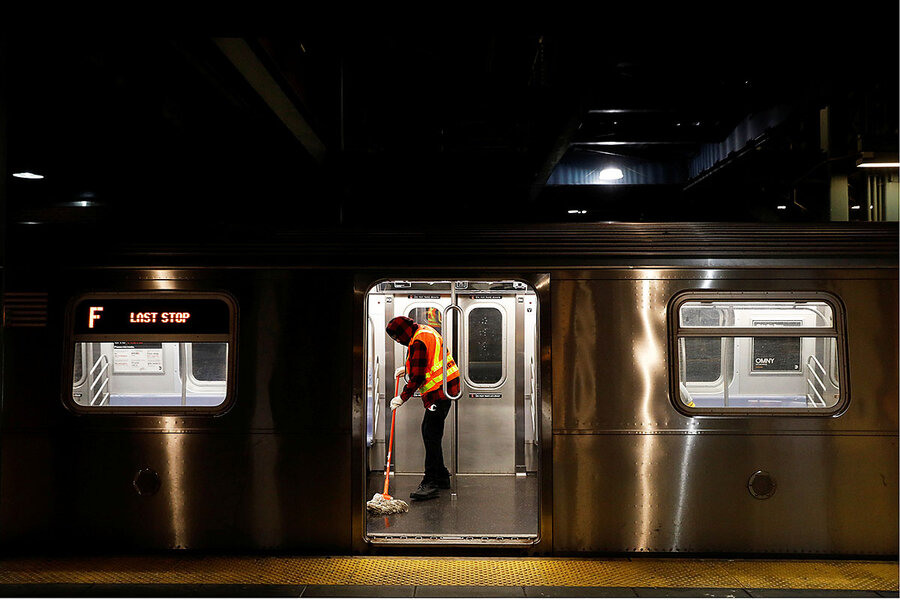 Public transit faltered amid the country’s poor control of the pandemic, as concerns climbed about being in public spaces – buses and trains included. Though numbers vary by region, average ridership decreased by 58% nationally between March and August of 2020, according to Mr. Gahbauer’s research.

That enormous dip and slow recovery since have dried up the two main sources of revenue for mass transit: rider fares and public funding. Suddenly desperate to remain solvent, many transit systems contracted their schedules, even while attempting to serve the essential workers who depend on their services. The longer the pandemic disrupts regular life, the more likely it is that economic inequality will increase from the slowdown.

How will this year alter the future battle lines?

To meet climate goals recommended by the scientific community, experts agree that car travel must play a smaller role in global transportation. In normal times public transit offers a sustainable and cost-effective alternative, but less so in a pandemic – where human and environmental health can feel like a zero-sum game.

“There’s a bit of a tension between what’s going on with this pandemic and our long-term future in terms of sustainable, equitable, and resilient mobility systems,” says Professor Miller.

Self-driving cars offer some hope to reduce pollution in the near future. Yet progress has been slow, says Professor Miller, and autonomous vehicles aren’t likely to enter city streets within the decade. Even at their electrified best, he says, cars are still an inefficient form of transportation, and hence an imperfect solution to the climate crisis.

In his opinion, the moment demands a grand shift in thought. If viewed as a foundational piece of urban infrastructure, public transit could expand this decade and cement a larger role in the transportation ecosystem. Permitting residents a larger menu of options when traveling – say biking, walking, or riding buses or subways – would help conserve city space, lower spending, and protect the environment.

What signals has the Biden administration sent?

So far, many industry experts like what they hear.

Newly appointed Secretary of Transportation Pete Buttigieg invested in sustainable transportation when he served as mayor of South Bend, Indiana. The administration has communicated that public transit will be a key part of its agenda on issues of climate and social equity, says Paul Skoutelas, president and CEO of the American Public Transportation Association.

“We’re very optimistic,” says Mr. Skoutelas. “They really understand and see the importance of transit and its relationship to the functioning and well-being of our cities.”

Most pressing now is more funding, to replenish the lifeline offered last year by the CARES Act. The Biden administration’s proposed pandemic relief bill earmarks an additional $30 billion for transportation.

Just as important, though, is addressing the pandemic and its chilling effect on ridership. An effective public health response is the first step to filling buses and trains across the country.

“As with so many things, the sooner we can go back to normal in a health context, the better we’ll be and transit will be,” says Mr. Gahbauer at UCLA.