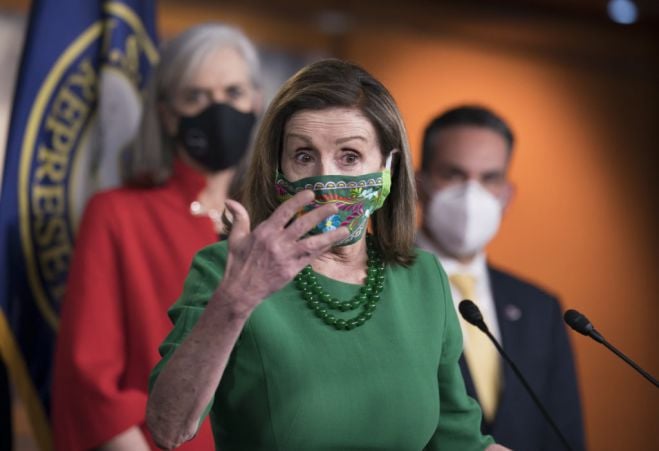 The US house of representatives has approved a 1.9 trillion dollar (£1.36 billion) pandemic relief bill in a triumph for new president Joe Biden.

The move came as top Democrats tried to assure progressives in the party that they would revive a derailed attempt to boost the minimum wage in America.

Mr Biden’s vision to provide cash to individuals, businesses, states and cities battered by Covid-19 passed on a 219-212 vote along party lines.

The legislation will now go before the senate, where Democrats seem intent on resuscitating their minimum wage push. Meanwhile, disputes could erupt over state aid and other issues.

Democrats said the faltering economy and the loss of half a million American lives demands quick, decisive action.

They say Republican legislators are out of step with a public that largely views the bill favourably, according to polls.

“This is what America needs. Republicans, you ought to be a part of this. But if you’re not, we’re going without you.”

Republicans said the bill is too expensive and said too few education dollars would be spent quickly to immediately reopen schools.

COVID-19 vaccinations are up and cases and hospitalizations are down, but let me be clear: now is not the time to relax. pic.twitter.com/oUuHCXl3s7

They said the measure was laden with gifts to Democratic interests such as labour unions, and funnelled money to Democratic-run states they suggested did not need the money because their budgets had bounced back.

House minority leader Kevin McCarthy said: “To my colleagues who say this bill is bold, I say it’s bloated.

That divide is making the fight a showdown over which party voters will reward for heaping more federal spending on combating the coronavirus and reviving the economy, on top of the four trillion dollars (£2.8 trillion) approved last year.

The battle is also emerging as an early test of Mr Biden’s ability to hold together his party’s fragile congressional majorities – just 10 votes in the house, with an evenly divided senate.

At the same time, Democrats are trying to calculate how to assuage progressives who lost their top priority in a jarring senate setback last week.

That chamber’s nonpartisan parliamentarian, Elizabeth MacDonough, said senate rules require that a federal minimum wage increase would have to be dropped from the Covid-19 bill, leaving the proposal on life support.

Hoping to revive that effort in some form, senate majority leader Chuck Schumer is considering adding a provision to the senate version of the Covid-19 relief bill that would penalise large companies which do not pay workers at least 15 dollars an hour.

That was in line with ideas floated on Thursday night by senators Bernie Sanders and Ron Wyden to boost taxes on corporations which no not hit certain minimum wage targets.

House speaker Nancy Pelosi offered encouragement, calling a minimum wage increase “a financial necessity for our families, a great stimulus for our economy and a moral imperative for our country”.

She said the house would “absolutely” approve a final version of the relief bill because of its widespread benefits, even if it lacked progressives’ top goal.