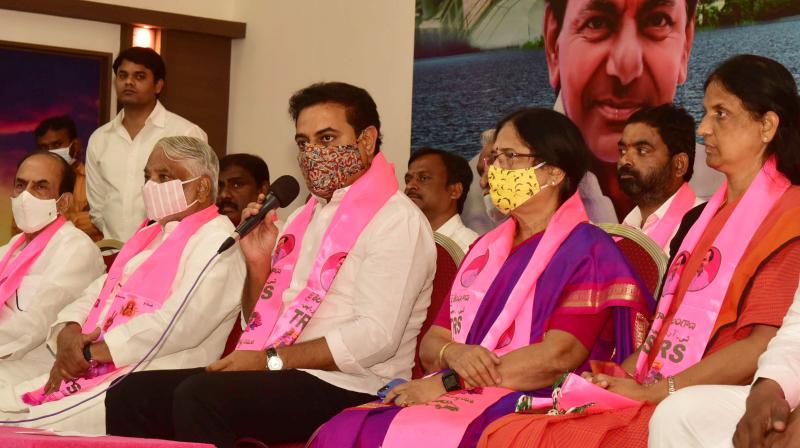 Hyderabad: The upcoming Legislative Council elections for the two graduate constituencies will be an acid-test for ministers and TRS MLAs engaged as election in-charges in their respective districts. The party leadership has made it clear that ministers who fail to ensure victory for party candidates will be taken to task.

Chief Minister K. Chandrashekar Rao has put the responsibility for ensuring the party's victory on in-charge ministers and MLAs of the respective districts. TRS working president K.T. Rama Rao's comments at the 'poll strategy meeting' at Telangana Bhavan on Wednesday have quickly become a hot topic of discussion in TRS circles.

Rama Rao met senior leaders to devise the poll strategy for the Hyderabad-Ranga Reddy-Mahbhubnagar MLC election. The meeting was attended by ninisters, MLAs and MLCs under GHMC limits. Ministers Talasani Srinivas Yadav, Ch Malla Reddy and Sabitha Indra Reddy were present on the dais along with Rama Rao.

Rama Rao told ministers Sabitha and Talasani that the party fared badly in their constituencies in the recent GHMC polls and this should not be repeated in the MLC polls. These elections will impact the party's future and no complacency will be tolerated, he said.

Many saw this as a hint that the TRS high command would even think of removing non-performers from the Cabinet and reward performers with berths. A Cabinet reshuffle is expected any time after the party's plenary on April 27.

The task is even tougher for the Warangal-Khammam-Nalgonda in-charges as the seat is held by the TRS and the party cannot afford to lose this.

Party high command is keen on TRS winning the Hyderabad-RR-Mahbubnagar seat, held by the BJP, at any cost to avenge the party's recent electoral setbacks at the hands of the BJP in the Dubbak Assembly bypoll and the GHMC elections.

Chandrashekar Rao and Rama Rao are giving utmost importance to MLC polls for first time in the backdrop of the BJP's growing might in Telangana state. They reckon that the results of these elections will impact the upcoming Nagarjunasagar Assembly bypoll and the Warangal and Khammam municipal corporation polls as also the elections to a few municipalities in April.

All the nine ministers and MLAs in the respective districts remain focused on MLC polls since October last and have been undertaking extensive campaigning along with the contesting candidates to ensure the party's victory.