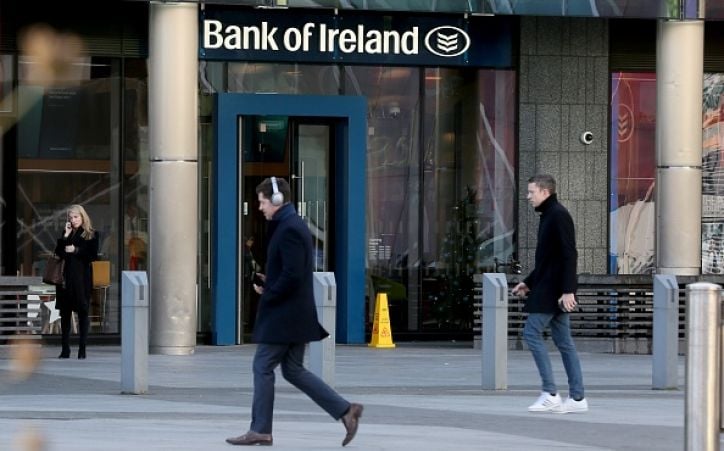 Pedestrians walk bast a brach of the Bank of Ireland near the Grand Canal Dock, in Dublin Photo: Paul Faith/AFP via Getty

Bank of Ireland has confirmed it is closing 103 branches on the island of Ireland, reducing its network in the Republic by about a third and its locations in the North by more than half, as Covid-19 has accelerated a shift in the industry towards digital banking.

The bank said it will be publishing the full list of branches later in the morning, once staff have been informed.

Bank of Ireland, led by chief executive Francesca McDonagh, reported an underlying loss of €374 million for 2020, after setting aside €1.1 billion of provisions for an expected surge in losses resulting from the Covid-19 pandemic.

The charge was at the lower end of the €1.1 billion to €1.3 billion range it had predicted in the middle of 2020, and the bank forecast that its provisions for this year will be “materially lower”.

“Covid-19 has accelerated this changing behaviour and we’ve seen a seismic shift towards digital banking over the past 12 months.”

Ms McDonagh added that Bank of Ireland had reached a “tipping point” between online and offline banking.

She said its mobile app is customers’ most popular way to bank and in contrast the number of people visiting branches had “sharply declined” and is now just over half of what it was in 2017.

“We know news like this can cause concern for some customers and for the communities that we serve,” she added.

“We’re not making these changes immediately – no branches will close in the next six months. That allows us to ensure the An Post partnership is up and running before any branches close, and gives us time to communicate fully with all our customers about every option available to them online, in a nearby BOI branch, or at a local post office.”

Speaking on Newstalk Breakfast on Monday morning, Ms McDonagh said there has been a 25 per cent increase in the bank’s mobile app. In three days the mobile app saw more business than the branches that are due to close would see in a year. Footfall in those branches was down 60 per cent.

She said the 200 staff in the branches due to close will have a range of options, they can move to a nearby branch or another section of the bank. Voluntary redundancy will be available, there will be no compulsory redundancy, she said.

When asked if Bank of Ireland was interested in Ulster Bank, she said it was an ongoing transaction and it was early days. “A lot of customers at Ulster Bank are concerned. Bank of Ireland is a leader in corporate lending, We feel we are in a good position to capture growth at a time of uncertainty.”

Closures will commence in September 2021.

The Financial Services Union (FSU) described the closures as punishment to communities for adhering to pandemic guidelines.

The union’s general secretary, John O’Connell, called on the bank to defer any closures to the end of 2022 and for a review of the impact such closures would have on the communities in which they are located.

There should be a debate rather than action by the bank “over our head”, he told RTÉ’s Morning Ireland.

Mr O’Connell said the FSU would protect the jobs and dignity of the staff involved and would campaign against the closures.

People needed to be treated with respect and the bank’s track record in that regard was not good, he said.

On the same programme, Seamus Boland of Rural Link said he was “extremely disappointed” by news of the closures. “We said it would happen, it’s the dishonesty. This is another blow to rural communities, even though I know some of the branches are in urban areas.”

Many post offices were located in shops and would not be equipped for dealing with some problems, he warned.

Bank of Ireland announced in August that it was seeking to eliminate the equivalent of 1,400 full-time jobs – or 13.5 per cent of its workforce – in the coming years.

It confirmed in November that 1,450 roles will be cut by the end of 2021 – with a total of 1,700 full- and part-time staff taking up a voluntary redundancy offer.

The programme has cost €189 million, within a €250 million restructuring budget set in 2018 and will cut its annual staff bill by €114 million when completed. – Additional reporting: Vivienne Clarke