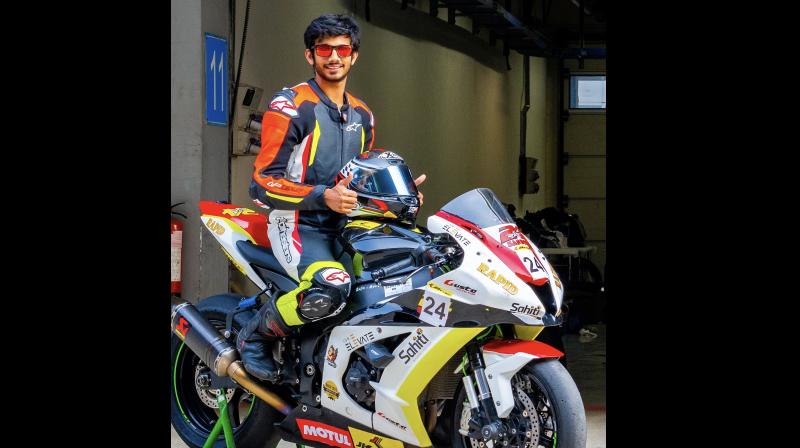 At 23 years of age, Satyanarayana Raju Nadimpalli, famously known as Sandeep Varma in the racing circles of Telangana and Andhra Pradesh, has done wonders on the track. The Hyderabad-based biker has won four prizes in the recently concluded eighth edition of the Valley Race, a national drag race championship, in Lonavala, Maharashtra. The racer won the first prize in the M9 (up to 1,050 cc) category, the fastest bike of the event, fastest timing of the event along with a 3rd place finish in the Unrestricted Category O2. While blazing through the tracks in the event at the speed of 9.52 seconds per lap, Sandeep also went on to break the record of world champion Rickey Gadson’s 9.57 seconds for the same lap.

Speaking about his racing experience at the event, the BTech graduate from Mallareddy Engineering College says that the drag race was different from any race he’s participated in before. Then explaining the structure of the drag race, he tells us that it consisted of ten clocked laps with a point system. “So each lap was a mini race in itself,” says Sandeep, elaborating further. “In a drag race, unlike other races, the machine power does almost 70% of the work and the rest 30% has to be done by the rider.”

Sandeep had always loved motorsports. After graduating from college in 2019, Sandeep had started working for Amazon, but he left the company in a few months as he couldn’t see himself working there. His first official race was the ‘Pulsar Festival of Speed’ in 2016.

“I won the Hyderabad leg and qualified for the grand finale. However, I met with an accident and could not compete and I was out of racing for a couple of months,” recounts the racer who had started racing in the 300 CC category races though now he races in the 1,000 CC category.

Till date, Sandeep has won forty-five trophies across various categories. “I am looking forward to racing in the JK 1,000 CC championship and then the Malaysian Superbike Championship, representing India,” he adds excitedly.
Taking part in such high-voltage championships, however, takes a lot of practice and dedication. So also, not being in touch with racing in 2020 because of COVID-19 was a dampener for Sandeep, given that, barring a few, he couldn’t participate in many races last year. Then again, that also added to the exuberance of his big win at Amby Valley. “This is a big tournament and winning this means a lot,” says Sandeep, adding that he was really nervous going into the race initially.

Despite his victories, not everything was hunky-dory for Sandeep. For instance, he tells us, even his parents hadn’t supported him initially. “I still went ahead with my passion, competing in several races and won many titles,” he says, adding that it took him one year to convince them, after which he raced in the Nationals in 2017.

There is, however, more to Sandeep’s need for racing. “I want to change the perception of people about racing as they are not aware of racing,” he says. “They think that it is illegal and dangerous. That’s not true. Racers take utmost care with respect to safety. But because most don’t understand the sport well in India, getting sponsors is a task, which adds to the challenges of the game as it is very expensive.”

Sandeep has been trying to fund himself through his YouTube channel, which has over 1 lakh subscribers. On the channel he talks about bikes and travelling.
The racer believes that if one wants to excel in any sport, they should start training early. “It is true for motorsports too. If one wants to make a career in the motorsports arena, they need to start early and finish all the State- and National-level competitions soon and begin representing India in international championships,” he says. “But most importantly, I believe parents should encourage their kids to take up this sport as they would any other, such as cricket and football and not just be scared.”

All said and done, Sandeep is quite happy the way motorsports has been developing in India. One more thing that has added to his optimism for the sport in the country is that last year, in a directive issued by the Department of Personnel and Training, Government of India, motorsport was added to the list of sport disciplines for the recruitment of sportsperson to Group C posts in the various Ministries/ Departments of the Government of India. Sandeep hopes for good things to come of it.