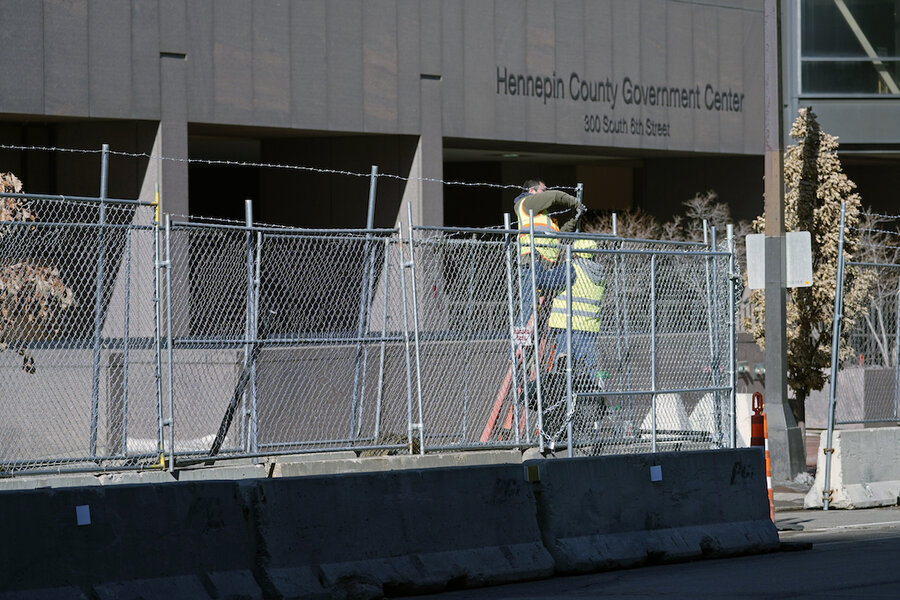 Barbed wire and concrete barriers surround the courthouse where the former Minneapolis police officer charged with killing George Floyd will soon go on trial, a sign of the deep uneasiness hanging over a city literally set ablaze almost a year ago in the anger over his death.

Mayor Jacob Frey and Gov. Tim Walz, both Democrats, were sharply criticized for failing to move faster to stop last summer’s looting and destruction, which included the torching of a police station. Anything less than a murder conviction for Derek Chauvin is likely to test them – and the city – once again.

Jury selection begins March 8 with opening statements March 29. Mr. Floyd, who was Black, died May 25 after Mr. Chauvin, who is white, pressed his knee on Mr. Floyd’s neck while he was handcuffed and pleading that he couldn’t breathe. Mr. Chauvin faces second-degree murder and manslaughter charges; three other fired officers go on trial in August.

Thousands of people took to the streets of Minneapolis after Mr. Floyd’s death. Many demonstrated peacefully. But for several nights, the unrest spiraled into violence, with stores looted and set ablaze along the Lake Street commercial artery that included the 3rd Precinct police station, which was home to the officers who arrested Mr. Floyd. The station itself was eventually abandoned by police and burned by rioters. Some nervous neighborhoods formed watch groups, setting up checkpoints and sometimes armed patrols. The violence finally subsided after National Guard troops arrived in sufficient numbers.

As the city moves to make the courthouse virtually impenetrable, some people worry about what might happen elsewhere if Mr. Chauvin is acquitted.

Elias Usso’s pharmacy on Lake Street had been open less than a year when it was destroyed by fire and water. He blames Mr. Chauvin personally for what he considers “the murder of an innocent man” as well as the destruction that followed – estimated at more than $350 million in Minneapolis alone.

“One police officer did that,” Mr. Usso said. “Something has to change.”

His Seward Pharmacy has reopened with help from donors. In between vaccinating customers against COVID-19, Mr. Usso – an Ethiopian immigrant – talked of still feeling the emotional turmoil over Mr. Floyd’s death and the unrest, and his concerns about the trial.

“I don’t know what’s going to happen to my business. We’re waiting to see,” Mr. Usso said. “But I will continue to give service to our neighbors and delivering prescriptions to grandma and grandpa. If something happens, we’re going to continue.”

Mr. Frey, the mayor, said more than 3,000 law enforcement officers from across the state and Minnesota National Guard soldiers will be at the ready when the case goes to the jury, expected in late April or early May.

Mr. Frey last week declared that Minneapolis remains “open for business,” and said people should go about their lives as usual.

But the security going up around the Hennepin County courthouse, City Hall, and the jail – all in the heart of downtown – is extraordinary. It includes three rings of concrete barriers, two topped by chain-link fencing with a trough in between filled with coils of razor wire. The innermost fence is topped with barbed wire, and ground-floor windows at all three buildings are boarded up.

Protest leaders are on edge, too. They accuse authorities of creating a police state downtown that could trample their freedoms of speech and assembly.

“It’s not going to dissuade us from protesting. We’re determined to let our voices be heard,” said Linden Gawboy, an activist with the Twin Cities Coalition 4 Justice 4 Jamar, which formed after the police killing of Jamar Clark in Minneapolis in 2015.

It’s not just the courthouse that’s barricaded. The state Capitol in St. Paul has been ringed with temporary fencing ever since last summer’s unrest. Inside, lawmakers have squabbled for weeks over providing extra state money for security during the trials, though Governor Walz and other officials say they’ll manage one way or another.

“There’s going to be very high emotion on all sides of this, and we’ll be prepared,” Governor Walz said.

Julie Ingebretsen, owner of a Scandinavian food and gift market on Lake Street that was founded by her Norwegian grandfather, said she’s not boarding up, though she expects some will in the miles-long commercial corridor that includes many immigrant- and minority-run businesses. Some have never taken down the plywood that they put up last summer.

While the store, Ingebretsen’s Nordic Marketplace, was looted and vandalized, Ms. Ingebretsen said she was fortunate that her store wasn’t burned. She said she feels “cautiously optimistic” now because of personal outreach efforts by Police Chief Medaria Arradondo and other city officials, and their assurances that plenty of police and Guard troops will be standing by.

“We’re celebrating our 100th anniversary this year, so we have every intention of celebrating another 100, and not going anywhere,” Ms. Ingebretsen said. “We are totally committed to keeping moving forward.”