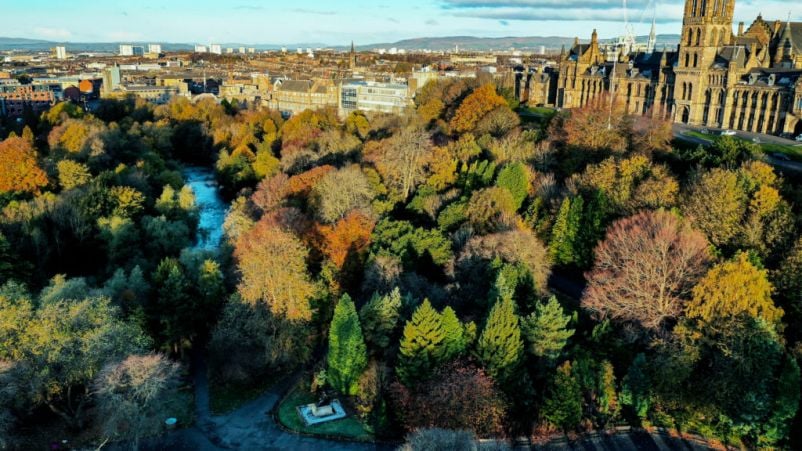 With Covid-19 restrictions limiting how we can pass our time, walking has quickly become the option of choice for many people.

Going for a walk to get some exercise and escape the house for a little while has been a welcome distraction, but with the 5km still in place, local roads and parks may be starting to seem monotonous.

Here’s a few urban parks, both close to home and slightly further afield, that you can look forward to exploring when travel restrictions ease…

Surrounding the Kelvingrove Art Gallery, this Victorian park straddles the River Kelvin and was designed by Sir Joseph Paxton, the man behind London’s famous Crystal Palace.

Popular with joggers, dog walkers and skateboarders who flock to the skatepark, the leafy area is peppered with a variety of monuments to famous men as well as the Suffragette Oak, which was planted in 1918 to mark the year some women in the UK were granted the right to vote.

Shaped a bit like a kidney, Sefton Park was envisioned by French designer Edouard Andre following his trademark curvaceous lines.

The focal point of the park is the magnificent Grade II listed Victorian glass Palm House, with the park also boasting a boating lake.

Perched on the edge of the River Lagan, Belfast Botanic Gardens is home to two Victorian glasshouses.

The central Palm House, picturesque rose garden and children’s playground make this a great visit for the whole family.

Brighton’s largest urban park, Preston Park plays host to events including the annual Pride festival. With attractive rock, rose and wildflower gardens, there’s lots to see on a stroll around the grounds.

Offering impressive views over Newcastle upon Tyne, the Town Moor is also impressively large, at roughly twice the size of London’s Hyde Park.

The urban common has a storied past, having previously been used for everything from executions to political rallies to horse racing. Nowadays the mostly treeless moorland is popular with runners and walkers.

This lesser known London park is a real hidden gem. Established by the Worshipful Society of Apothecaries in 1673, the small but perfectly formed walled garden houses 5,000 species of edible and medicinal plants.

One that some may be able to visit sooner rather than later, Dublin’s St Anne’s Park is beautiful all year round.

With winding paths and some spectacular trees, the space is also home to a classical Chinese garden, a Herculean Temple folly, an ivy-covered clocktower and rose garden, which comes into full bloom from June.

Situated behind Cardiff Castle, sprawling Bute Park features rugged woodland and flower-filled meadows as well as an arboretum and formal landscaped gardens. With lots of kid-friendly activities like wildlife walks and nature trails, the park is also peppered with sculptures and historic points of interest like Gorsedd Stone Circle and Blackfriars Friary, an ancient monument dating back to the 13th Century.