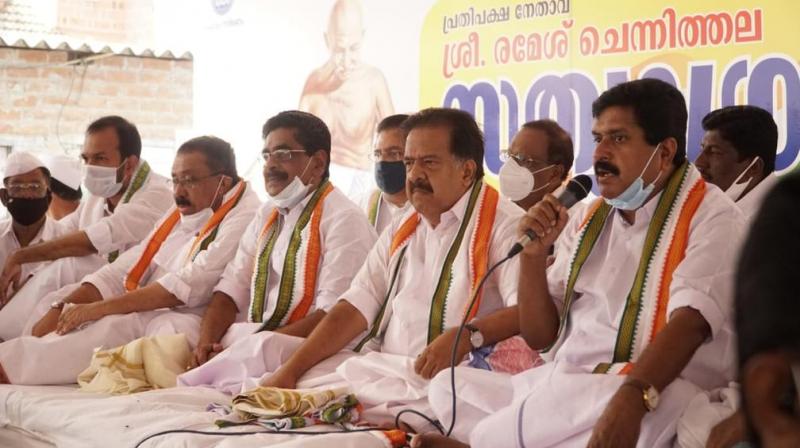 Thiruvananthapuram: Amid the row over signing of an MoU between the CPI(M)-led government and a US-based firm, Leader of Opposition in the Kerala Assembly Ramesh Chennithala on Saturday said the Congress-led United Democratic Front will undertake a coastal rally from March 1 "to save fisherfolk" and fisheries department.

Both the rallies will culminate on March 6 at Vypin in Ernakulam district, he said.

Chennithala alleged Chief Minister Pinarayi Vijayan was lying about everything related to the recent controversy over the MoU.

"I am astonished to hear that the chief minister did not know about the signing of an MoU. It was something that has happened under his ministry. Now even the ministers are saying they did not know about its signing," Chennithala said.

Recently, the Left government had decided to cancel a Rs 5,000 crore memorandum of understanding (MoU) between KSIDC and the US-based EMCC International, against which the Congress has been raising allegations.

The government had also cancelled another MoU worth Rs 2,950 crore between the Kerala Shipping and Inland Navigation Corporation (KSINC) and the same company to build 400 deep-sea fishing trawlers and new harbours and for port development activities.

On Friday, Vijayan had said the government was unaware of such an MoU.

"Normally when an MoU is signed, it should be informed to the department secretary concerned. However, the secretary concerned was not informed. The government was unaware of such an MoU. However, during the last leg of the Opposition leader's rally, they brought it up."

"We did not hesitate and directed to cancel the same as it was not informed to the government."

The government had also ordered a probe into the matter, which was raised by the Opposition "to tarnish the image" of the state government and mislead the fishing folk in the state, he had added.

Chennithala reiterated his demand for a judicial probe into the matter.

A day-long hartal called by various opposition outfits over the signing of MoU with the EMCC, on Saturday partially hit life in coastal areas of Kerala.