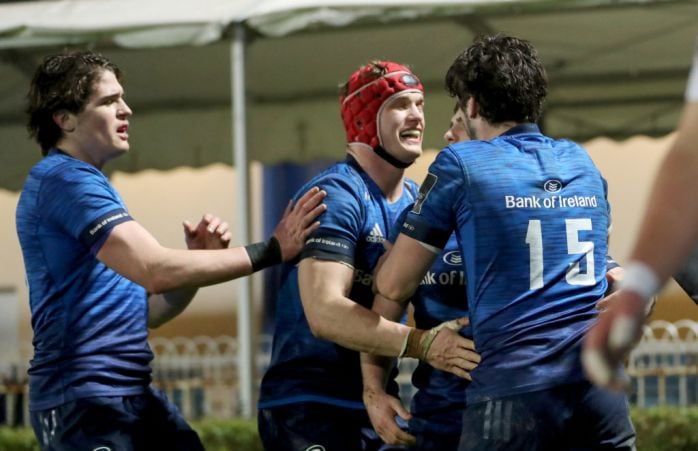 Catching a high ball in the 37th minute, an airborne Hastings raised his lead leg and his boot made contact with Cian Kelleher’s face. Referee Frank Murphy produced his red card following the TMO review.

By that time the hosts were already 21-7 up after converted scores from Harry Byrne and Scott Penny, as well as a penalty try after Cole Forbes was sin-binned for a tackle in the air.

Penny added another converted try two minutes after Hastings went off, but Glasgow made a game of it in the second half thanks to tries from Rufus McLean and Huw Jones.

But after TJ Ioane’s 70th-minute sin-binning, the hosts ran in late tries from captain Luke McGrath and Kelleher.

In Leinster’s first home game since early January, impressive fly-half Byrne touched down after just two minutes, and it was his cross-field kick which led to winger Forbes taking out Kelleher for the penalty try.

The 14-men of Glasgow responded with Jones breaking two tackles and flanker Tom Gordon brilliantly holding on to the centre’s low pass to score.

The 14-point gap was restored by the end of the first quarter, with Penny barging over from close range. Byrne converted for a 21-7 lead.

Due to Scotland’s postponed clash with France, Glasgow welcomed back nine players, and the likes of Jones, Forbes and McLean all threatened on breaks.

Nonetheless, Leinster’s defence was resolute – late call-up Jamie Osborne stood up well in midfield – and with Hastings soon dismissed for dangerous play, the Warriors were regularly under pressure.

They suffered a further blow just before the break when Penny, in his first senior game in the number eight role, took a quick tap to bag the bonus point. The conversion was tagged on by David Hawkshaw, who had replaced a groggy Byrne.

However, on the restart, Glasgow’s revival was sparked by a terrific Grant Stewart burst, with the hooker’s offload putting McLean over for his first senior score.

Replacement Ross Thompson converted with aplomb and also added the extras to Jones’ try, the centre showing impressive strength to ground the ball under a pile of bodies.

It was not until replacement Ioane’s sin-binning for a dangerous clear-out on Jimmy O’Brien that Leinster could regain control.

Hawkshaw slid a penalty wide, but O’Brien and Dave Kearney then combined to put McGrath over in the left corner. Hawkshaw converted and a sixth try followed in the 76th minute, O’Brien releasing Kelleher to finish off a counter attack.