Hello, dear visitors of the site “Visiting Samodelkina”.
Today I want to tell you about how I made good starting wires for starting a car with a discharged battery.
Many will say that it is impractical to make such wires, because there are many ready-made solutions on the market. As a car enthusiast with a fairly long experience, I will say that, although it is true, you can buy ready-made ones in every car shop, and, at the same time, we practically do not win in price, but, nevertheless, it is advisable to make them with your own hands.
< i> And here's why:
The first (and most important) is that it is difficult to find wires with really good cable sizes. On the packaging, manufacturers often write inscriptions informing that their wires are capable of transmitting 300 A or more without loss, but in fact, it often happens that only insulation is thick in them!))))). Of course, you can start the car with the help of such wires, but only if you use them as a way to recharge your own battery. That is, after connecting your battery to the battery of the donor car, wait ten minutes or more. Then try to start. But in order to really immediately apply the necessary currents to the starter, nevertheless, a large cross section is required. And, as I already said, in the purchased wires there is practically no cross-section of more than 6 mm2.
And the second drawback of purchased wires is their length. Rarely is the length more than three meters, and more often they are even shorter. But batteries are often not installed on the very edge of the car. That is, the donor car has to come close to each other! But after all, the battery is not always discharged when the car is parked in the middle of the field and you can drive up to it from any side!)))). And you have to push the car out manually.
So I decided to make homemade wires to eliminate these shortcomings .. And for this I needed:
1. KG cable, single-core, 16 mm. 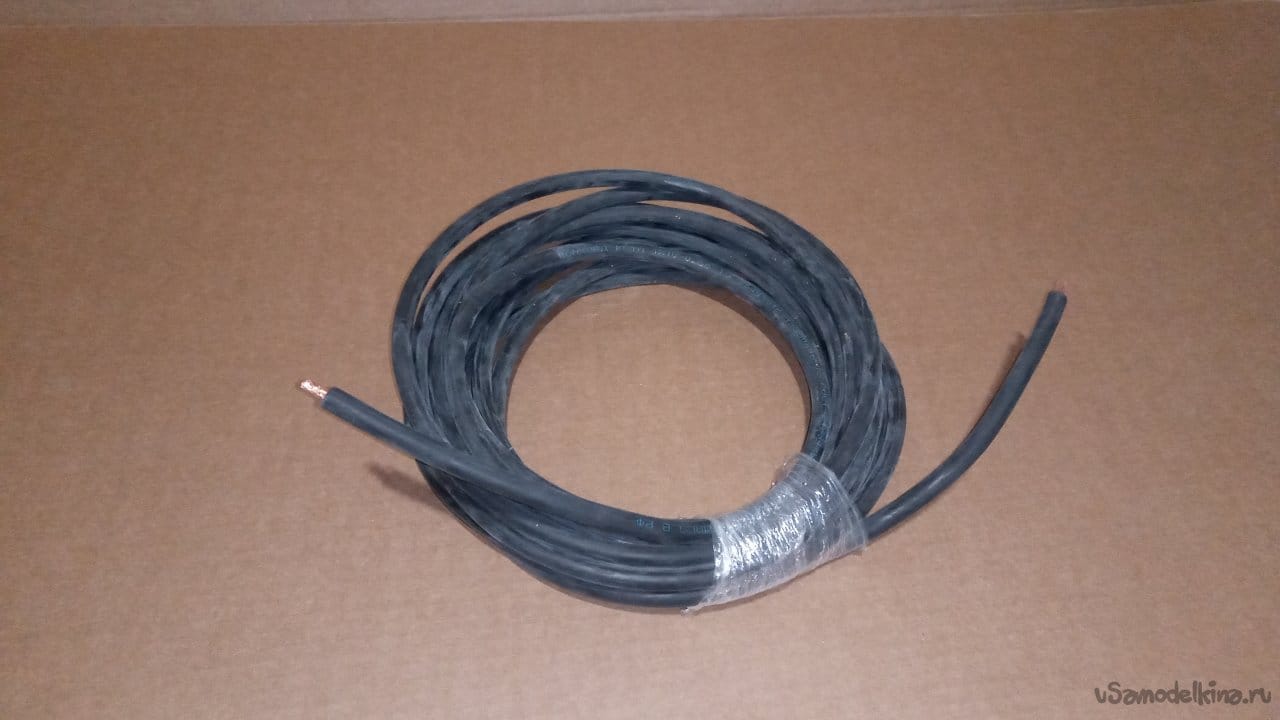 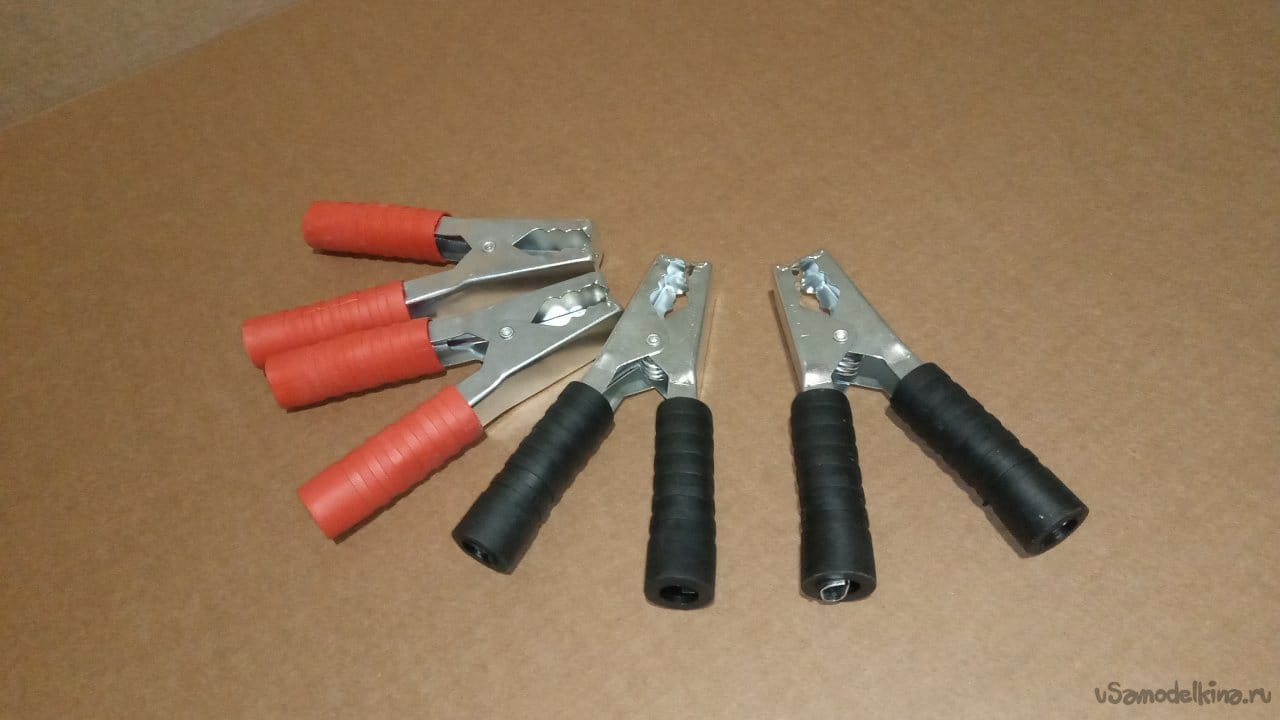 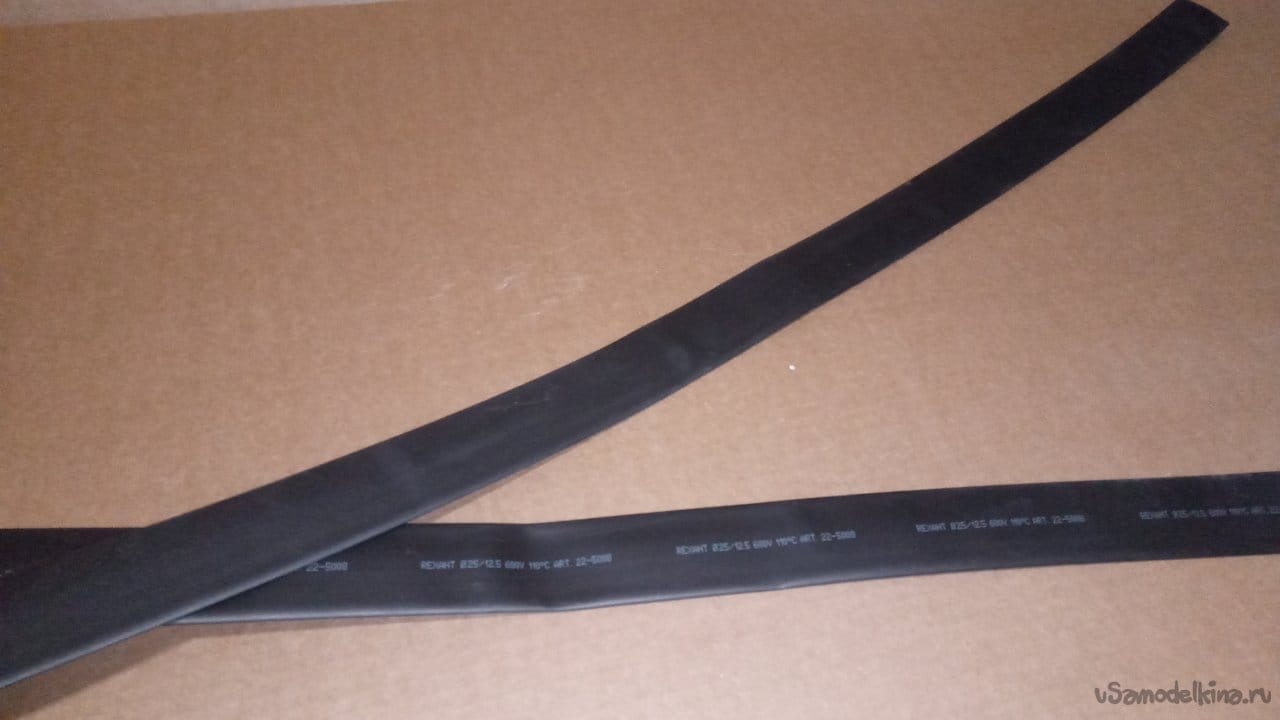 Now many will say that 16 squares is already too large a section! That would be enough for ten … But, the resistance of the wire depends not only on the cross section, but also on the length! And I determined the optimal length of the wires at five meters! (And you never know, suddenly the car is “nose” to the fence?))) Then five meters – right next to it! Just reach out in a straight line, bringing the “donor” closer to a few centimeters …. But still, you won't have to push it out. After all, it's not just that it's hard. More often, it fails due to lack of space. After all, another car should be parked nearby.
First of all, I cut the purchased ten-meter piece of cable into two of the same length.
Then I pulled it into a heat-shrinkable cambric.
I will dwell on the reason for this action separately.
Proceeding, again, from my own experience, I know that it is much more convenient to unroll cables if they are interconnected. You can, of course, just wind them up with electrical tape at certain intervals, but I decided to connect them with heat shrinkage. After all, long cables always tend to get confused! And unraveling them, and even in the cold, and even in the dark, is still a pleasure !!! And when tightened in heat shrinkage, they will turn into a flat, flexible, but springy enough cable, which, even when twisted into rings, easily straightens. It cannot get confused because of the shape of its section. True, for storage, this twist will have to be fixed somehow. But after all, you have to use them extremely rarely, so this will not cause any tangible inconvenience.
< a href = "https://usamodelkina.ru/uploads/posts/2021-02/1613734506_img_20210218_200309.jpg" rel = "prettyPhoto"> 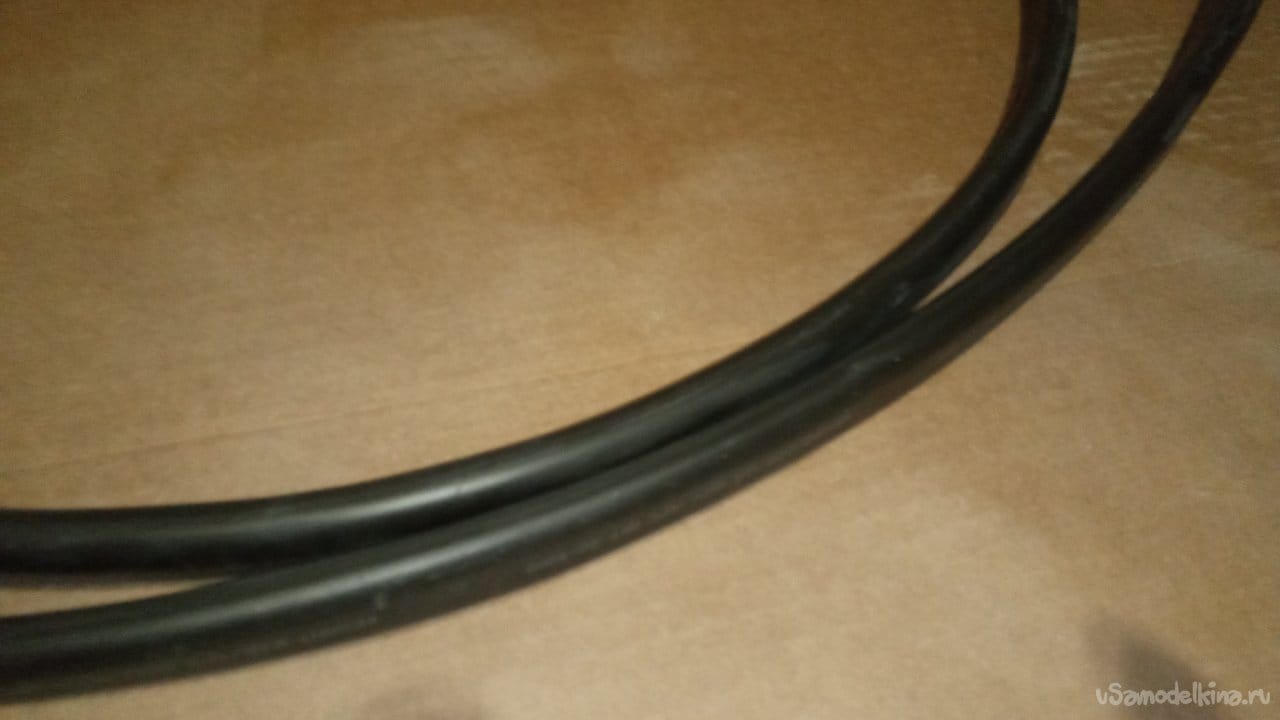 I used four tubes one meter at a time. So, taking into account their overlap on each other, the segments remained free, about 60 centimeters long, which is quite enough: 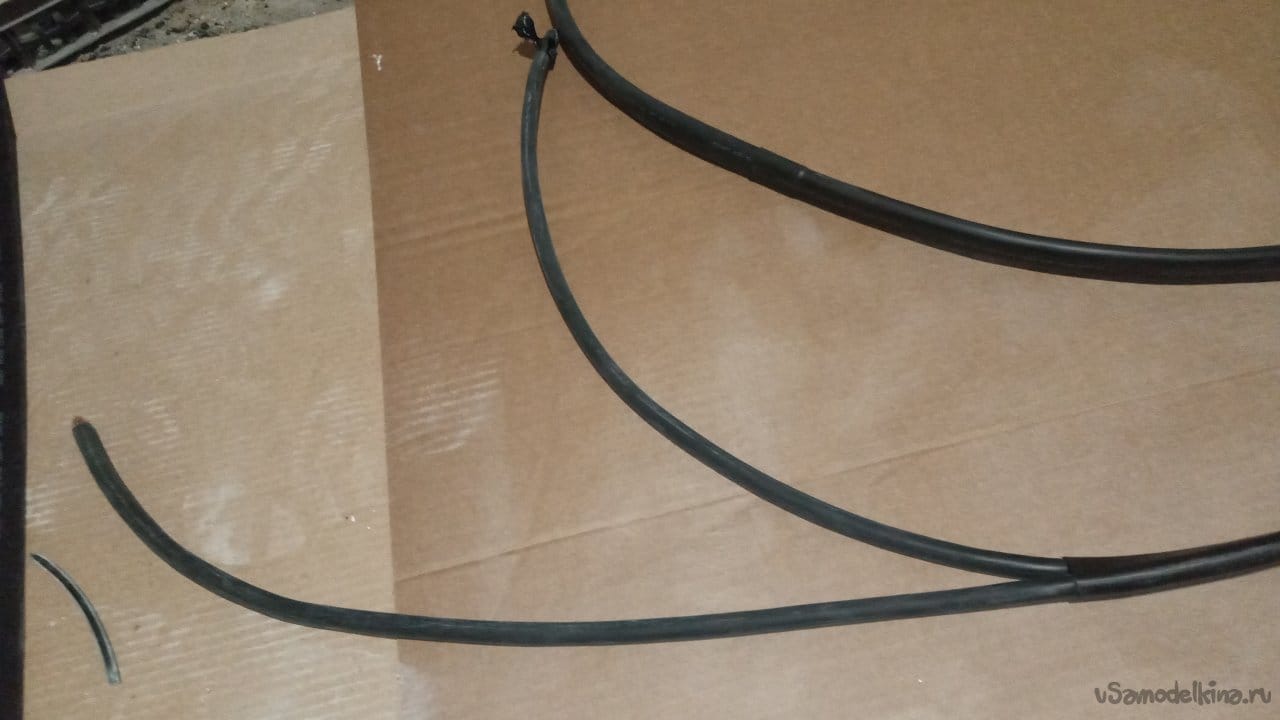 Now you need to connect “crocodiles”. Since it is extremely important to respect the polarity, the crocodiles were purchased in pairs, with insulating caps in black and red. In order not to confuse (and at the same time not to forget to put them on), having traced one wire along the entire length, I put insulating tubes of the same color removed from crocodiles on both ends: 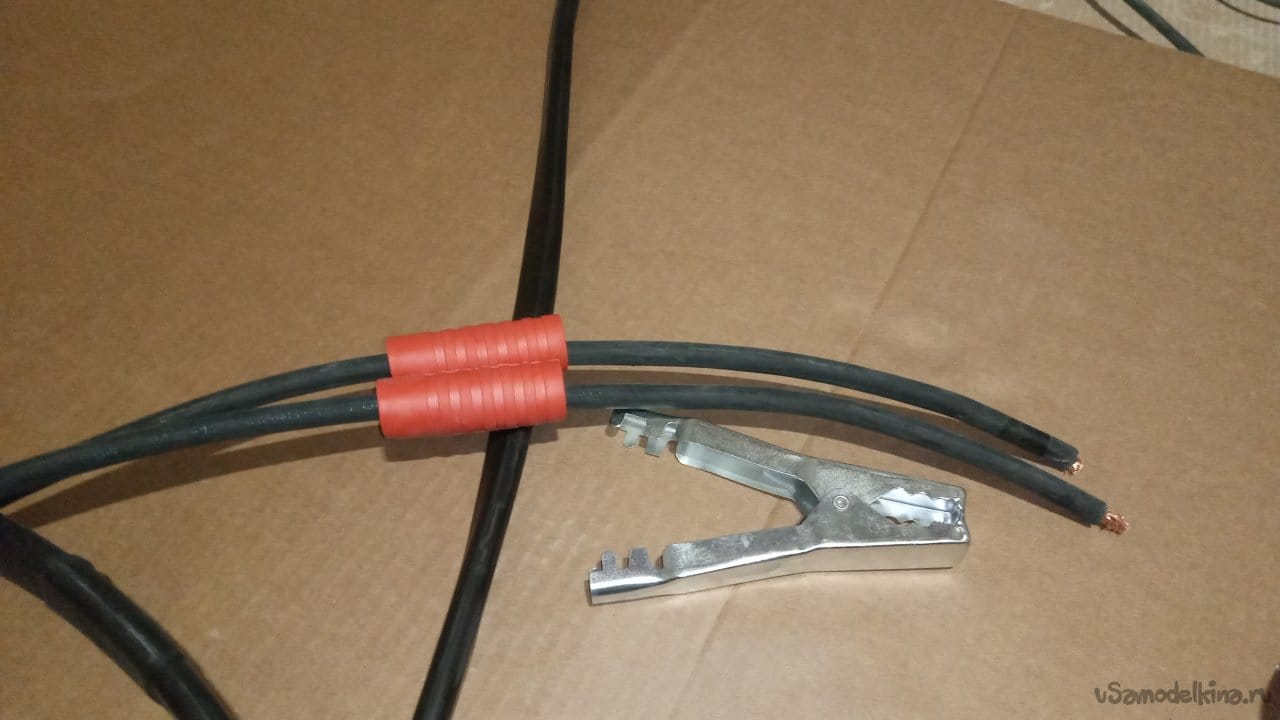 Then he added the “crocodiles”. It was possible to simply mechanically clamp the bare ends, but I decided, nevertheless, not to regret the solder and solder. Tinned the bare ends and the surface of the “crocodile”, fixed, by crimping the edges of the wire insulation with pliers, and soldered. I managed to do this using a 100-watt soldering iron: 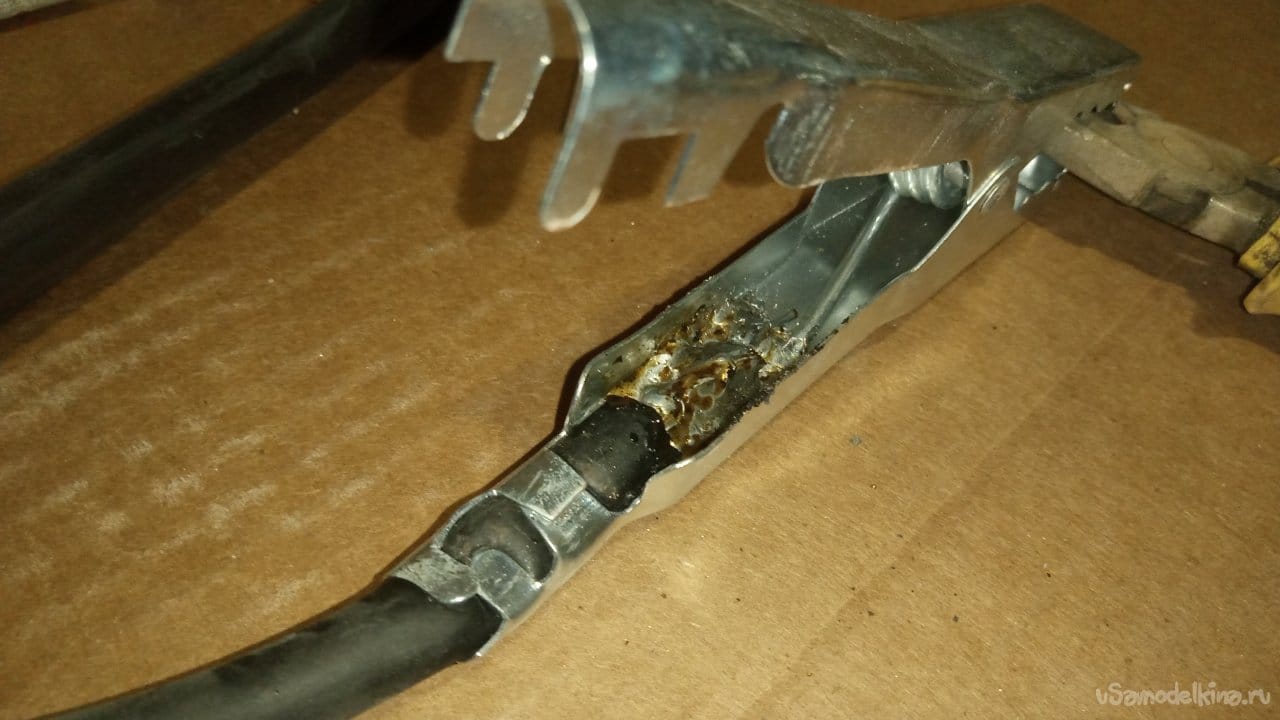 To make the insulating tube-nozzle sit more tightly, I wound a little electrical tape before putting it on. (There was no blue one. But I think the black one will do for such a not very important business!)))))
That's all, actually! The wires are ready !: 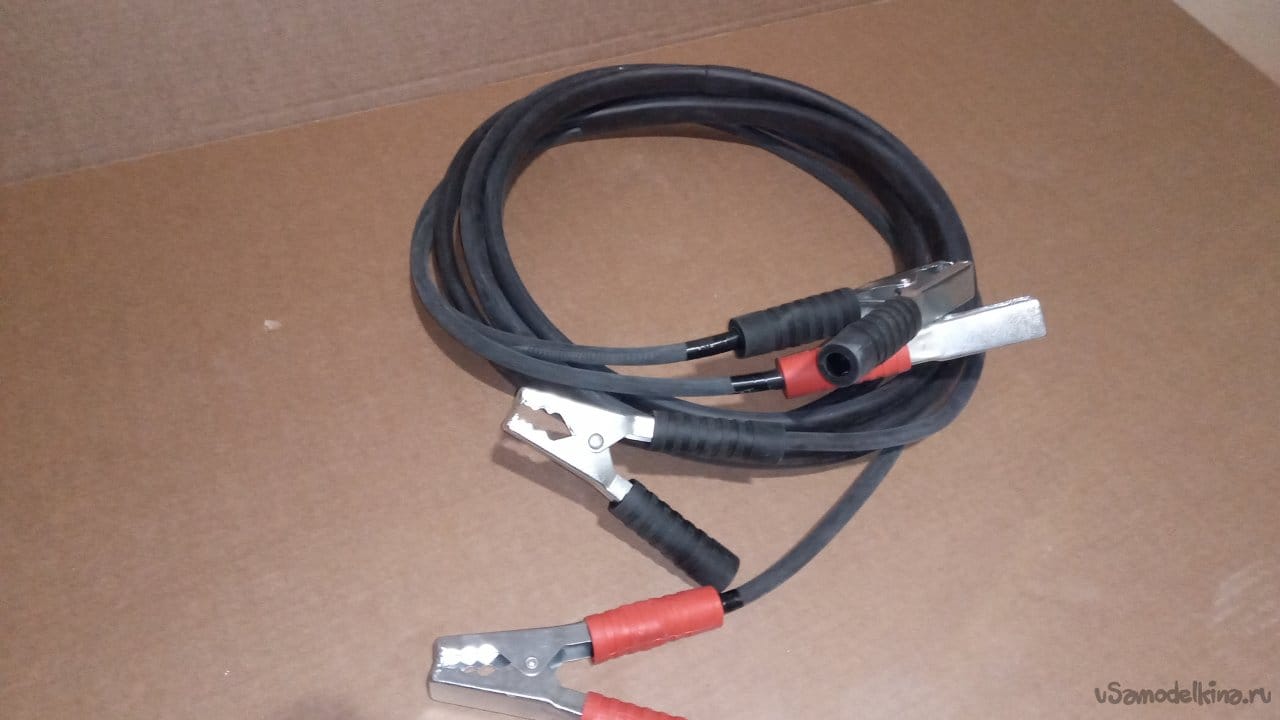 An acquaintance (also a “home-made”) bought hoses for the plasma cutter. They were in a spunbond bag, neatly sewn and zipped. He did not need it, and his hand did not rise to throw it away.))) He offered me to take it under the wires. Just fit: 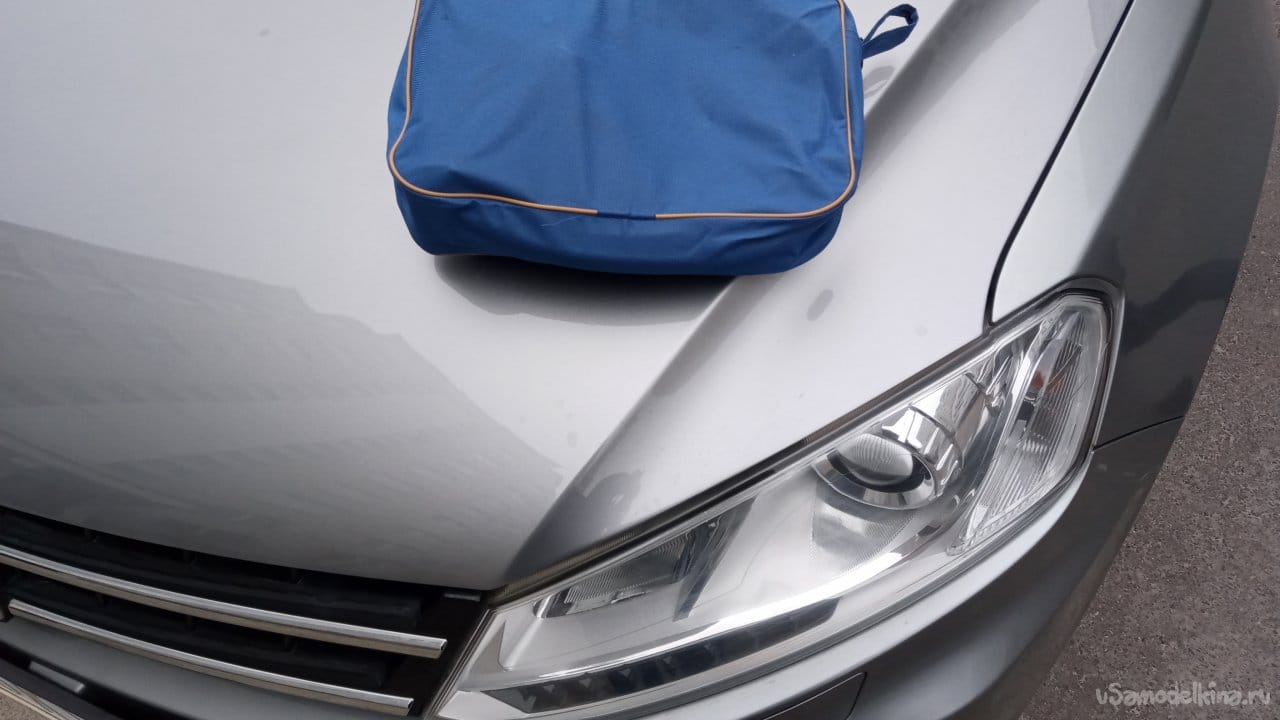 Of course, ideally, the car should be operated with a serviceable and fully charged battery. But we do not live in a perfect world! And it happens that circumstances develop in such a way that when we turn the ignition key, or press the starter button, we hear either a hard attempt by the starter to crank the engine, or an on-board computer notification that the battery is discharged! And then, having such wires in the trunk, you can easily start the engine from another car, turning to your fellow car enthusiast for help and driving to the garage. But, I want to draw your attention to the fact that in this case, you need to put the battery on charge ASAP by connecting it to the charger. And the faster you do this, the less sulfates will have time to solidify on the plates, and the more useful capacity will remain in the battery !!! You cannot just let the car run and operate the battery further without charging the battery to full capacity. 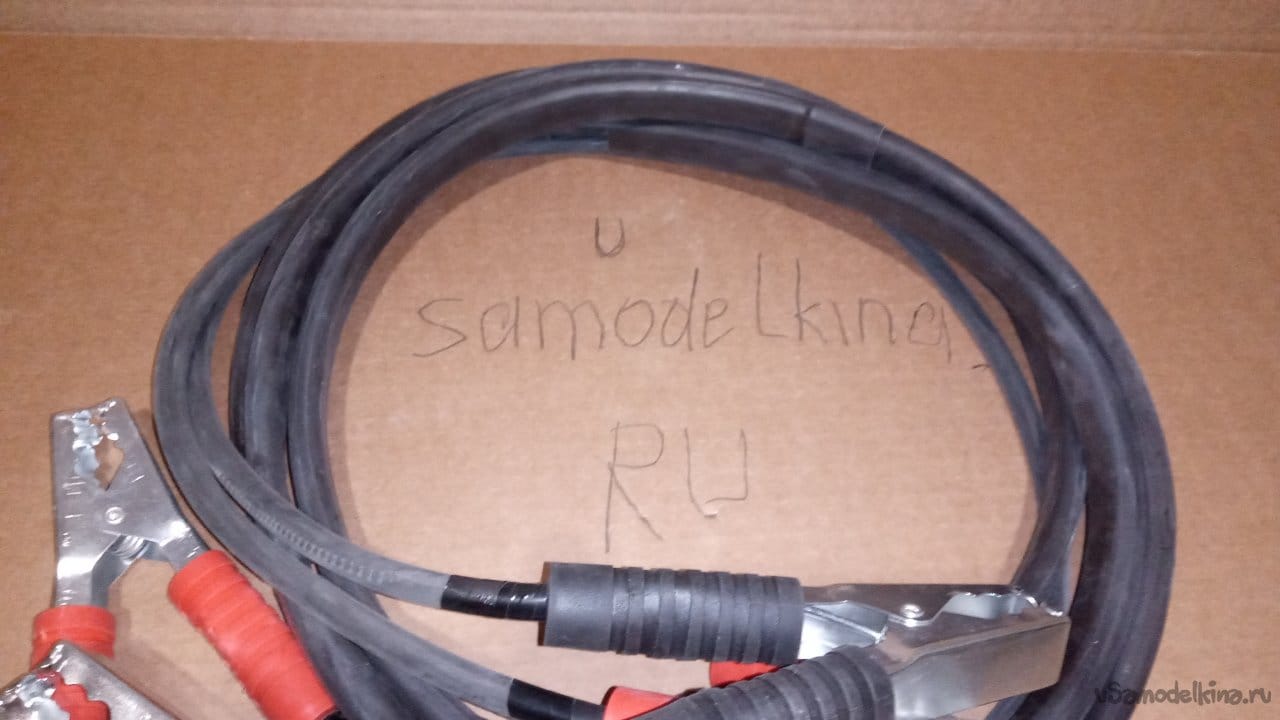