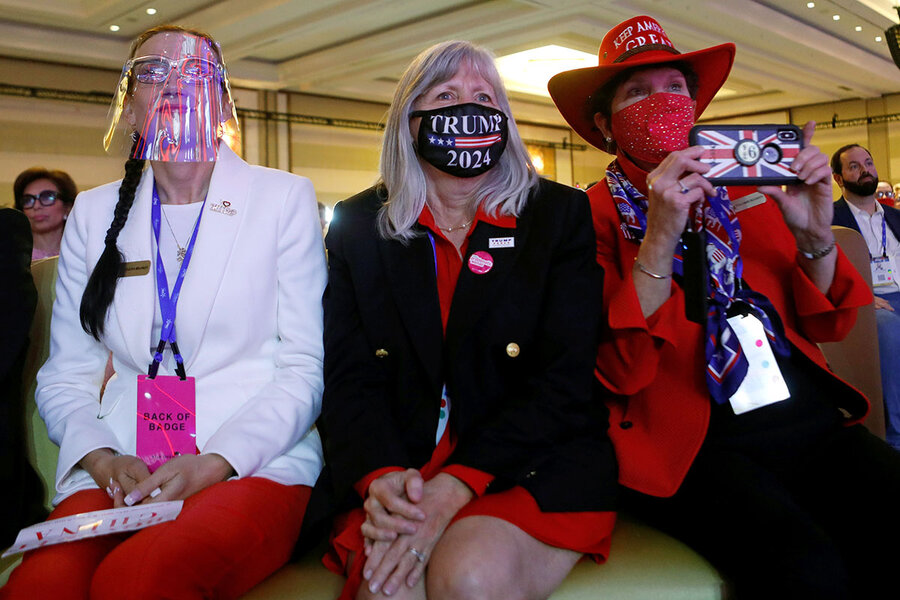 Barbara Cubin has known Liz Cheney since she was a little girl, and she’s not surprised that Wyoming’s only House member is taking a stand against former President Donald Trump.

“She needs to be right; she’s always been like that,” says former Congresswoman Cubin, who represented Wyoming from 1995 to 2009. “It doesn’t matter the cost. She’ll fall on her sword to be right.”

Since the Jan. 6 riot in the U.S. Capitol, which led to then-President Trump’s impeachment on one charge of incitement, Congresswoman Cheney – the No. 3 House Republican – has been among the most vocal of the 17 House and Senate members from her party who voted against the president. Right before last weekend’s big Conservative Political Action Conference, or CPAC, Ms. Cheney said of Mr. Trump: “I don’t believe that he should be playing a role in the future of the party or the country.”

In his address at CPAC on Sunday, Mr. Trump singled her out for special opprobrium, calling her a “warmonger.”

“In her state, her poll numbers have dropped faster than any human being I’ve ever seen,” the ex-president claimed, apparently referring to a poll commissioned by his own political action committee, Save America.

Feelings remain raw on both sides of a Republican civil war that has pitted pro-Trump party activists – many now holding leadership positions in state and local GOP committees – against old-style conservative, establishment Republicans.

For now, the battle for the soul of the GOP seems over, and Mr. Trump has won. He controls the national party and has acolytes in powerful positions all over the country – with some, like Florida Gov. Ron DeSantis, in strong position to compete for the Republican presidential nomination in 2024 if Mr. Trump himself doesn’t.

But between now and the 2022 midterms, much could change. Mr. Trump is no longer president, and has lost access to Twitter, his main communication tool. Perhaps the most surprising outcome of CPAC, a bastion of Trump loyalty, was the straw poll of attendees: It showed only 68% want him to run for president again. In a trial run of a potential 2024 GOP primary field, he won 55% of the vote. More heartening for Mr. Trump was the 95% who said they want the Republican Party to stick with his agenda.

Even if Mr. Trump himself doesn’t necessarily represent the future of the GOP, it appears his ideas do.

“We want Republican leaders who are loyal to the voters and who will work proudly for the vision that I’ve laid out today,” he said Sunday. “And what is it? … Military, law and order, great trade deals, great education.”

Mr. Trump teased a possible presidential run in 2024, but didn’t commit. He made clear his immediate goal will be to help defeat his political opponents in the midterms – be they Democrat or Republican. He’s reportedly starting a super political action committee, or super PAC, which can raise unlimited funds from individuals and corporations to support his chosen candidates.

That Mr. Trump is the dominant force in the GOP is beyond dispute. His choice for Republican National Committee chair, Ronna McDaniel, won reelection unanimously in January.

The impact of state and local Republican Party committees, where the support for Mr. Trump can be CPAC-level intense, will also matter going forward – perhaps most in battleground states and longtime Republican-dominant states that are trending blue, such as Arizona and Georgia.

That might seem to work against GOP interests in the 2022 midterms. Republicans will be defending the seats of retiring senators in battleground states like Pennsylvania and North Carolina, as well as trying to win back seats in Arizona and Georgia in their quest to retake the Senate majority. Logic might suggest a more moderate approach to win back, for example, the suburban voters who went Democratic last November.

But there’s a simple reason some state and local Republican parties are among the most pro-Trump bastions in the country, political analysts say. Mr. Trump remains the party’s dominant figure, and with his MAGA message – Make American Great Again – he’s the top driver of GOP activism. Grassroots enthusiasm is the key to winning elections.

Mr. Trump remains popular among Republicans, while GOP senators who move away from the former president have seen declines in their job approval ratings at home – a sign that distancing from Mr. Trump is risky. No senator has seen a bigger decline in support among home-state Republicans than the party’s Senate leader, Mitch McConnell, according to a mid-February Morning Consult poll. However, he’s in no danger of being voted out, since he just won reelection in November.

But each state, and even each congressional district, is its own political ecosystem. In deep-red Wyoming, where Mr. Trump won 70% of the vote – his highest winning percentage of any state – Ms. Cheney may still be tough to defeat in a Republican primary, despite her outspoken opposition to the ex-president.

In an interview, Ms. Cubin at first predicts that Congresswoman Cheney will lose her seat, then pulls back. “People forget stuff in two years,” she says. “If she were to try to sincerely be a representative of Wyoming, that would move some people.”

Former Wyoming GOP chair Matt Micheli also suggests that Ms. Cheney may be able to survive a primary challenge. “As the next two years play out, and the national fight will focus on Republicans versus Democrats, she’ll reassert herself as a voice of conservatism,” Mr. Micheli says.

Still, another active Wyoming Republican, Jack Mueller, former national chair of the Young Republicans, describes himself in an email as “very unhappy” with his member of Congress – “even more so after her comments” about Mr. Trump right before CPAC.

In Michigan, a very different state from Wyoming, Republican political consultant Jamie Roe warns against counting out the two GOP members who voted to impeach Mr. Trump. One, Rep. Fred Upton, has served in Congress since 1987, and “has been primaried more times than I can count,” Mr. Roe says. “People have been writing his political obituary for 30 years. Anyone who underestimates Fred Upton is crazy.”

The other GOP Michigan congressman who voted to impeach, Rep. Peter Meijer, is a freshman – and first-term reps can be especially vulnerable come reelection time. But he understands what he needs to do, says Mr. Roe, who consults for Congressman Meijer.

“He will sit down and talk to anyone about why he did it,” Mr. Roe says. “He’s convinced he did the right thing.”

Mr. Roe also notes that Mr. Meijer’s district was represented for 10 years by Justin Amash, first as a tea party Republican and then eventually a Libertarian, before declining to run last November. Mr. Meijer’s voters “understand people who go against the grain,” Mr. Roe says.

Around the country, Republican House and Senate members have faced censure by state and county GOP committees over their impeachment votes. Some GOP House members have also been censured for voting to remove first-term Republican Rep. Marjorie Taylor Greene of Georgia from her committee assignments over past statements supporting conspiracy theories.

But at least one committee member, speaking on background, suggested the panel should just let it go. “My feeling on the subject is, gosh, it’s over,” the member says.

Other party activists in Pennsylvania feel more strongly, perhaps if only to lay down a marker for future representatives. After Mr. Toomey’s impeachment vote last month, the chair of the Washington County GOP spoke out. “We did not send him there to vote his conscience,” Dave Ball told a Pittsburgh TV station.

Another state being watched closely is Arizona, where Kelli Ward, an unfailing Trump loyalist, was just reelected state GOP party chair. This, after Arizona voted for Democrat Joe Biden for president and elected Democrat Mark Kelly over incumbent Republican Sen. Martha McSally in a special election. Senator Kelly will face voters again in 2022, a marquee race in the battle for control of the Senate.

But Florida is another story. Once considered the biggest electoral battleground in the country, the Sunshine State is now effectively the headquarters of Trumpism. Mr. Trump now lives there, and Governor DeSantis topped the straw poll at CPAC as conferencegoers’ choice for GOP presidential nominee in 2024 – if Mr. Trump doesn’t run – with 43% of the vote.

“In most states, the governor is considered the head of the party,” says Aubrey Jewett, a political scientist at the University of Central Florida. “And with DeSantis, our GOP state party is probably as pro-Trump as you can get.”