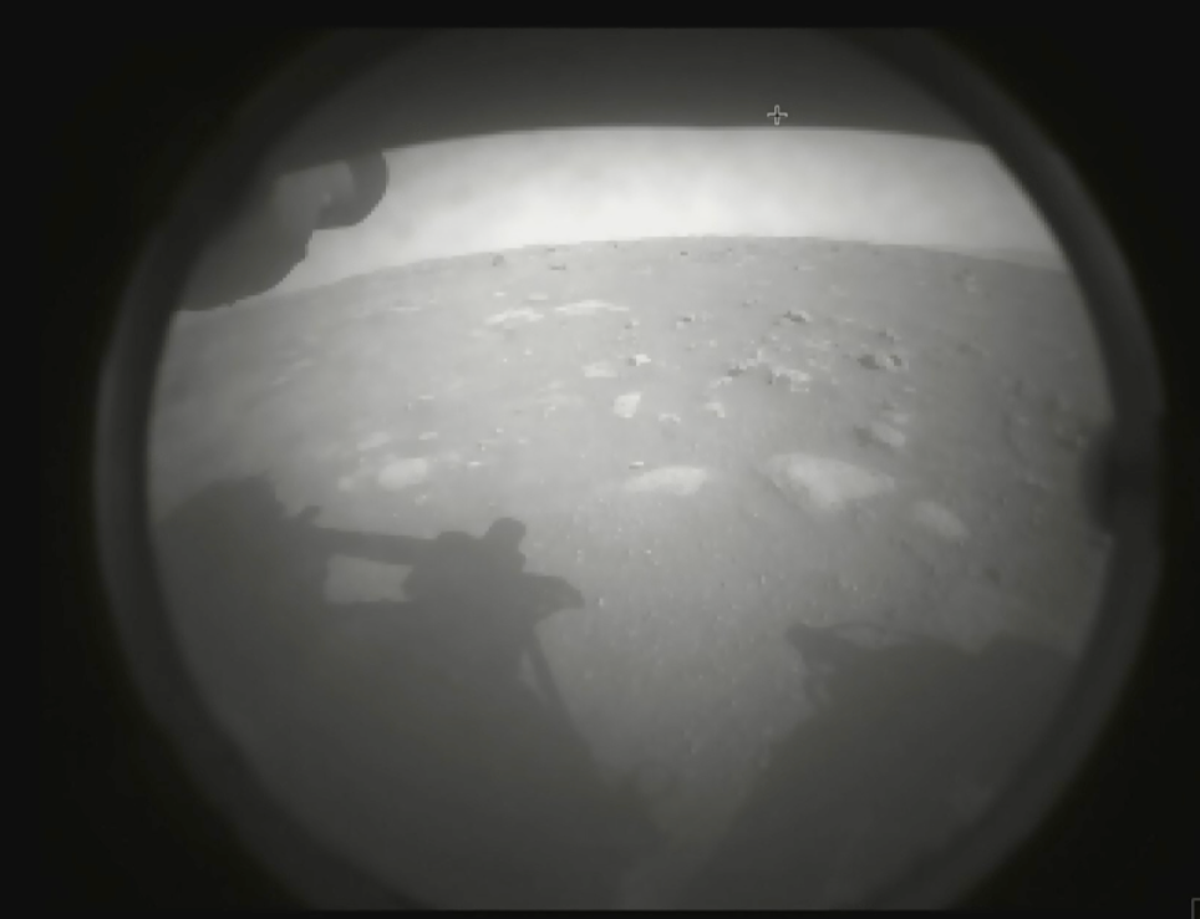 Nasa has revealed the first pictures taken by its Perseverance rover on Mars.

The images show the red planet’s surface, confirming that the rover was able to land safely and give mission control information about where it had dropped down.

But they also represent the first images from a rover that Nasa hopes will be able to find evidence of alien life.

The first image showed the horizon as well as the surface in front of the rover. It also shows the rover itself, as a shadow in the front of the image.

The second image was a bit more clear, and showed even more of the ground.

The images arrived to earth over 11 minutes after they were taken, because of the delay caused by any messages having to travel through the vast expanse of space.

In the days to come, much better images will arrive. The rover is better equipped to document its journey than ever before, with 25 cameras and two microphones, many of which were used to document the journey down to Mars.

As such, mission controllers will get to see things they never have before, including the view of the enormous parachute opening and slowing the spaceraft, as well as the ground getting closer as the vehicle moves towards the ground.

“A feast for the eyes and ears. It’s really going to be spectacular,” observed Arizona State University’s Jim Bell, lead scientist for a pair of mast cameras that will serve as the rover’s eyes.

Perseverance, the biggest, most advanced rover ever sent by NASA, became the ninth spacecraft to successfully land on Mars, every one of them from the U.S.

The car-size, plutonium-powered vehicle arrived at Jezero Crater, hitting NASA‘s smallest and trickiest target yet: a 5-by-4-mile strip on an ancient river delta full of pits, cliffs and fields of rock. Scientists believe that if life ever flourished on Mars, it would have happened 3 billion to 4 billion years ago, when water still flowed on the planet.

Over the next two years, Percy, as it is nicknamed, will use its 7-foot (2-meter) arm to drill down and collect rock samples with possible signs of bygone microscopic life. Three to four dozen chalk-size samples will be sealed in tubes and set aside on Mars to be retrieved by a fetch rover and brought homeward by another rocket ship. The goal is to get them back to Earth as early as 2031.

Scientists hope to answer one of the central questions of theology, philosophy and space exploration.

“Are we alone in this sort of vast cosmic desert, just flying through space, or is life much more common? Does it just emerge whenever and wherever the conditions are ripe?” said deputy project scientist Ken Williford. “We’re really on the verge of being able to potentially answer these enormous questions.”

China’s spacecraft includes a smaller rover that also will be seeking evidence of life — if it makes it safely down from orbit in May or June.Perseverance was on its own during the NASA-described “seven minutes of terror” descent.

Flight controllers waited helplessly as the preprogrammed spacecraft hit the thin, 95% carbon dioxide Martian atmosphere at 12,100 mph (19,500 kph), or 16 times the speed of sound, slowing as it plummeted.

It released its 70-foot (21-meter) parachute, jettisoned its heat shield, and then used a rocket-steered platform known as a sky crane to lower the rover the final 60 or so feet (18 meters) to the surface.It was the second time NASA dropped in on Mars via sky crane. The rover Curiosity pioneered the technique in 2012; the vehicle is still prowling around a crater.

Mars has proved a treacherous place: In the span of less than three months in 1999, a U.S. spacecraft was destroyed upon entering orbit because engineers had mixed up metric and English units, and an American lander crashed on Mars after its engines cut out prematurely.

Perseverance will conduct an experiment in which it will convert small amounts of carbon dioxide in the atmosphere into oxygen, a process that could be a boon to future astronauts by providing breathable air and an ingredient for rocket fuel.