Reply to the request Vanjka CHE .
The power supply in the photo was made 23 years ago, in a box from a decommissioned device Ш4528. This is a former thermostat for an electric furnace, which worked with an XK (L) sensor from 0 to 400 ° C and a time recording of the temperature with an ink pen on a paper tape. Box dimensions: 90 x 90 x 230 mm. The power supply circuit is standard, nothing special is different.
Power transformer from the same device – 5Yu4.700.004-2, USh 4 x 4 cm central core rewound. The primary winding is left, wound with a 0.35 PEL wire and contains 825 turns.
Secondary windings:
1.70 turns with a PEL 1.0 wire, so that after rectification with diodes of the KD202 type (with any letter, bridge, on radiators), at idle it does not exceed 25 V, i.e. the operating voltage of the applied electrolytic capacitors, which were then much larger in size, with the same capacity and voltage, in comparison with modern ones.
2. 2 and 3 windings – 60 turns each with a PEL 0.5 wire, each of which is connected to bridges of the KTs405 type. In the center of the bridges, holes ø3.2 mm were drilled for attachment to the radiator, in which holes ø2.5 mm were drilled and a thread was cut with an M3 tap. After rectification by diode bridges and smoothing by capacitors, the voltage goes to the stabilizers, and from them to the outputs, (see the diagram). The pointer device is taken from an old tape recorder. It has a non-linear scale, so it was necessary, having selected the resistor R * for a full scale deviation of 25 V, and, reducing the voltage, put marks on the scale of the device. The shunt, Rsh, for measuring the current strength, is made of a copper wire ø 0.5 mm, approximately L = 1.0 meter (pick up), wound on a pencil. In the upper position of the switch, (on the diagram), the device shows amperes, and in the lower position – volts. The scales are the same. The backlight of the scale is a glued-in SMN 6.3 V light bulb. Once these PSUs had to charge a car battery. Knowing that the radiator of the power transistor KT808 is too small, set the charging current to 3A for 6 hours. In this case, the transistor was hot, and the transformer and the KD202 diodes were warm. See photos of BP. He took it off from all sides.
Homemade. They also asked me about a cassette holder for resistors. The cassette holder is glued from matchboxes along the standard row E12, therefore there are 12 boxes in each vertical row. In 1952 IEC (IEC – International Electrotechnical Commission) approved the standard values ​​for resistors, called the nominal range of E1A resistors, all details can be found on the Internet. The rows are divided into: E3 ± 50% (not used now); E6 ± 20%; E12 ± 10%; E24 ± 5%; E48 ± 2%; E96 ± 1%; E192 ± 0.5%, 0.25%, 0.1% or more. All this also applies to capacitors. On the boxes vertically there are inscriptions: 1 (1,1); 1.2 (1.3); 1.5 (1.6); 1.8 (2.0); 2.2 (2.4); 2.7 (3.0); 3.3 (3.6); 3.9 (4.3); 4.7 (5.1); 5.6 (6.2); 6.8 (7.5); 8.2 (9.1). The main inscription, for example, 1, forms a row E12, and with an additional inscription (1,1), it already forms a row E24. For example, this is Oma. Multiply by 10 – we get a vertical row with tens of Ohms, multiply by 100 – a vertical row with hundreds of Ohms. The same applies to Kilo-Ohms. If the box is empty (this is not about me!), You can safely take the resistor from the box located above or below, because the deviation is only 10%, but inside the box itself is -5%! In the good old days, when buying radio equipment, not only a warranty card was given, but also a diagram of a device, for example, a TV. The diagram, usually in the lower right corner, explained that the voltages, resistor and capacitor ratings may differ from those indicated in the diagram by ± 20%. 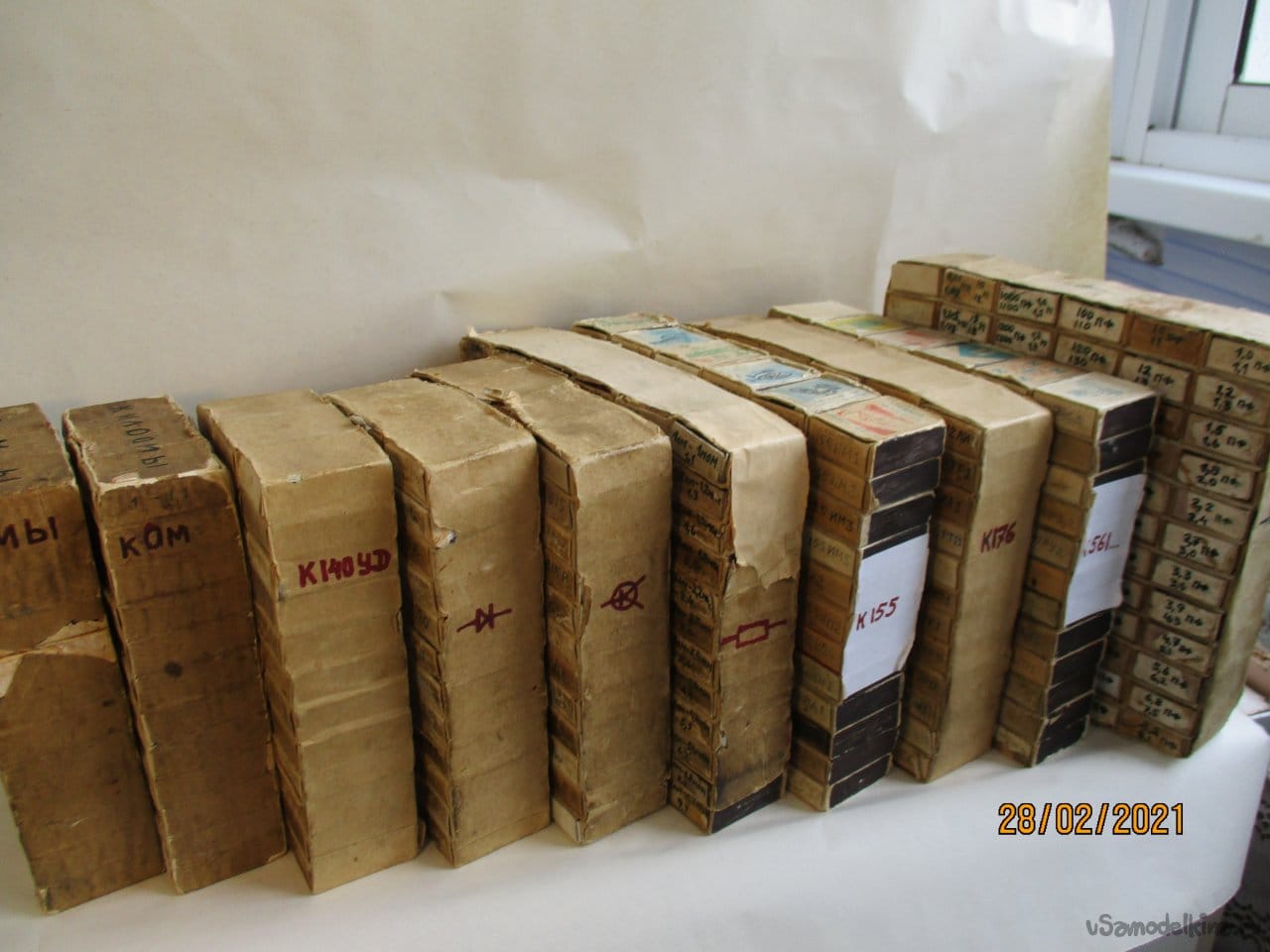 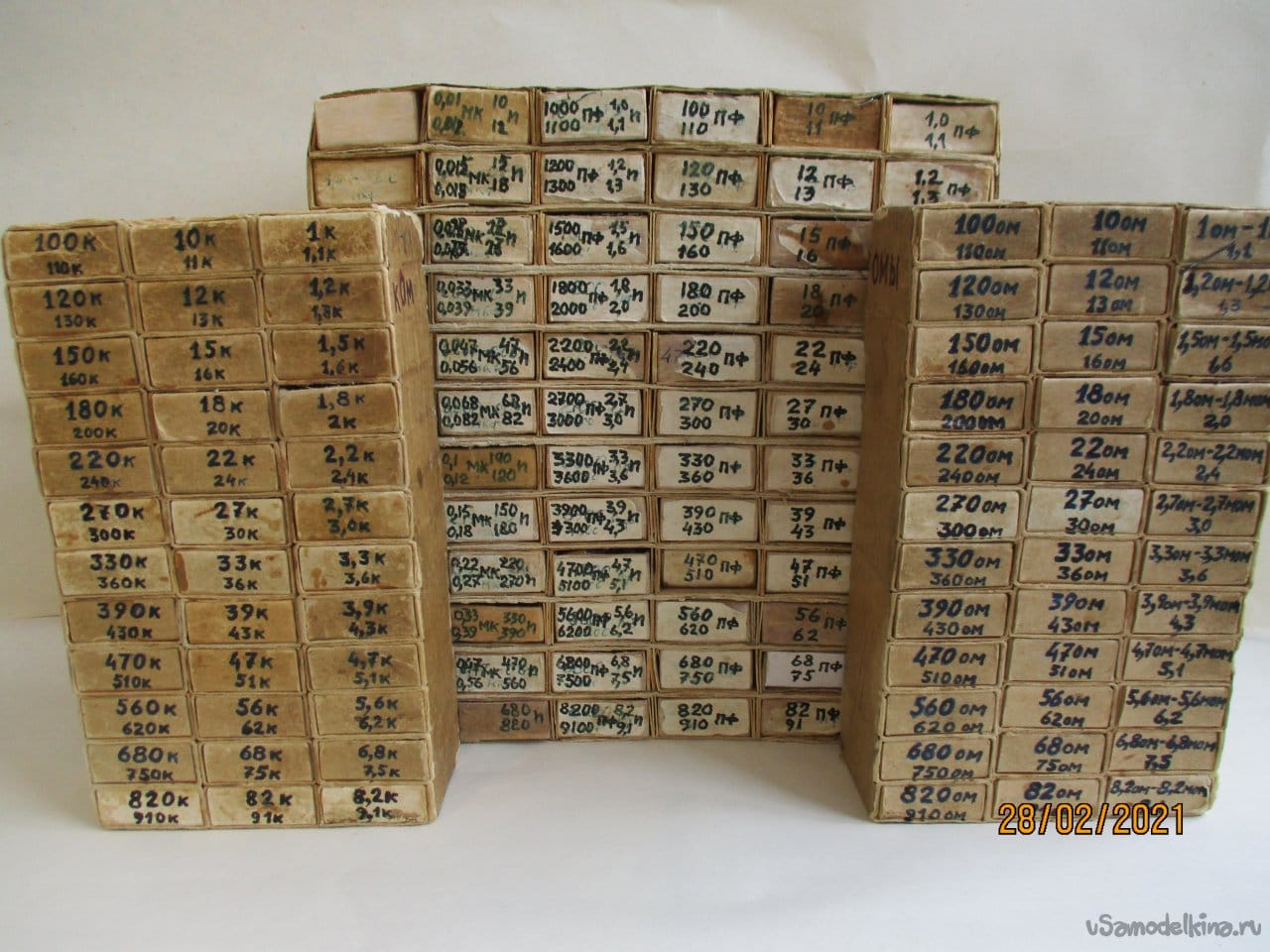 The picture shows not only the resistor cassettes, but also the capacitor cassette in the background, although in the beginning it was for the resistors. By the way, there are two of them: one cassette holder for resistors MLT0.5, MLT1, and the other cassette holder for MLT0.125 and smaller. It is noticeable that the boxes in the background are much larger in size and there is an interesting story associated with them. Back in 1973, my friend (now my wife) went to Leningrad for an industrial practice. We then studied at BPI (Belarusian Polytechnic Institute, now BNTU, Belarusian National Technical University) at different faculties, and met while visiting the collective radio station DOSAAF of the UK2AAG Institute. They went on the air, contacted radio amateurs not only in the USSR, but also with different countries and continents, Morse code or SSB, (microphone, one, usually the top, sideband with a suppressed carrier). To confirm the connection, we sent each other (required!) A QSL card. This is an ordinary postcard, which indicates the call sign of the radio station, date, time of communication (GMT, or Moscow time, MSK), type of communication, operator's name, etc. And it was sent free of charge, by mail or through DOSAAF. Once a QSL card came from Japan, which we were terribly surprised by. It was soft as a rag, printed on a blotter in multicolored Latin script, hieroglyphs, with gilding, and sealed in cellophane. In those days, there were no plastic bags and bags, everything was wrapped in paper and carried in bags or string bags.
In Minsk, we sometimes came across on sale matches produced by the Leningrad Match Factory with enlarged matchboxes made of veneer and thick matches (60 pieces!). An attempt to purchase in Minsk did not lead to anything, the sellers said that there were only a couple of boxes left. Therefore, I asked a friend to send me a hundred matchboxes by mail to make a cassette holder. At the post office, in Leningrad, when they saw a bunch of matchboxes, they asked if she was going to set fire to St. Isaac's Cathedral, hinting at Herostratus, who in 300 BC. burned one of the seven wonders of the world, the temple of Artemis of Ephesus, for the sake of glory. But, making sure that the boxes are empty, they sent them away. So these boxes are years old. And this operation cost 1.3 USSR rubles: 1 ruble for 100 boxes of matches and 30 kopecks for shipment. And in general, thanks to the boxes, hundreds, if not thousands of radios are stored compactly and are easy to find. I would like such cassette holders to be mass-produced, made of plastic, I would acquire them. Hey, entrepreneurs!
To Samodelkin. Continuing the topic about adjusting the temperature of the soldering iron tip, I decided to check how various simple circuits regulate the voltage from zero to 220 V. But the fact is that this will be a practical check and analysis (description) of the result, which is not quite suitable for your site, where the description of homemade products is rather short, and the analysis of the work is usually absent. Maybe the above is not your format and does not suit you.
Best regards – A. Serov. 02/28/2021
From Admin: everything is fine, your article is quite useful, and I publish it in the “tips” section.