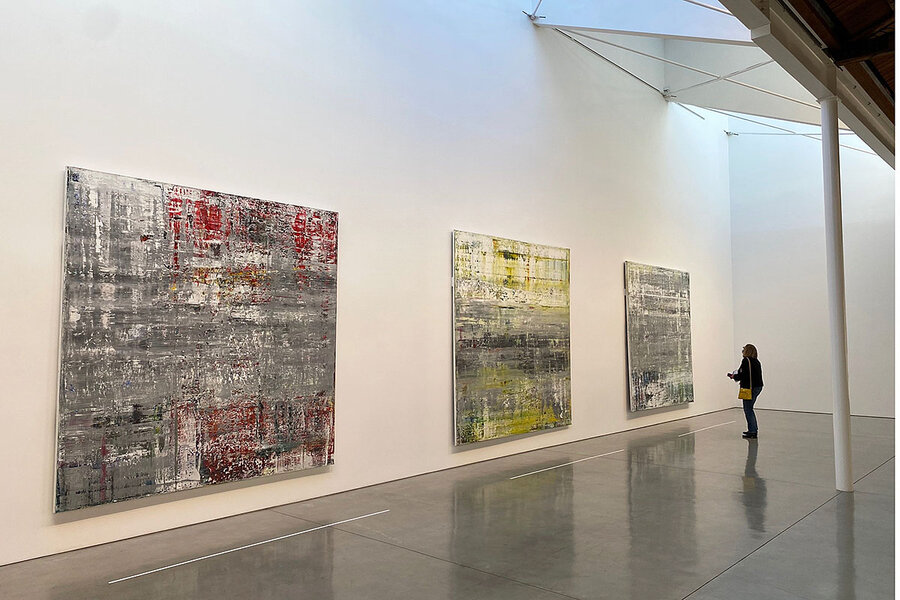 California became the first state to institute a lockdown last March, and for nearly a year, museums in Los Angeles have been closed. Unlike every other large city in the United States, this cultural capital has not opened museum doors since the pandemic restrictions began. Not even temporarily. Not even to a limited number of visitors, though the outdoor spaces are allowed to open.

Which is why I jumped to make an appointment to see the paintings of German artist Gerhard Richter after I read a review about them. The exhibit is at the Gagosian gallery in Beverly Hills. Galleries, it turns out, are an exception to the museum pandemic restriction because they are commercial entities. No matter that I knew very little about Mr. Richter, one of the world’s greatest living painters. No matter that the predominant color of the massive paintings was described as gray. It would match the pallor of my soul, which has been starved for art.

Museums the world over are struggling during the pandemic. But it’s particularly acute in LA, a global center for contemporary art hit hard by the pandemic. Its scene of artists, galleries, and museums is exploding with new activity – or was in early 2020. Museum directors are especially frustrated because other indoor spaces, such as shopping malls, are open. The California Association of Museums has appealed to the state to allow reopening with safety measures and limited capacity, and many in the field describe museums as an oasis of inspiration and healing.

“Visitors have been ecstatic not only to see art in person, but specifically to see these masterpieces by Gerhard Richter,” writes a Gagosian spokesperson in an email. The paintings were part of a retrospective at the Metropolitan Museum of Art in New York that was cut short due to the pandemic. “Art is always a balm in eras of crisis,” adds the spokesperson, “and now is no different.”

I can attest to that.

Apart from the standard art history class in college, I never studied art. But I grew up on museums in Washington, D.C., and gallery-going is an integral part of my life. I travel for art – a family reunion at a Van Gogh show in New York as a young adult; another trip to New York, decades later, to walk beneath Christo and Jeanne-Claude’s saffron “Gates” in Central Park; an unforgettable few days in San Francisco with my husband to see “A Bigger Exhibition” by David Hockney – my all-time favorite contemporary artist.

To make up for the pandemic art deficit, my husband and I have visited outdoor sculpture gardens. A friend has a colorful piece in a public space overlooking the ocean in Newport Beach. And UCLA is known for its comprehensive sculpture garden by 20th-century greats. On a Sunday afternoon last summer, picnickers among the works created their own lazy scene like the famous one by 19th-century French pointillist Georges Seurat at the Art Institute of Chicago.

I even watched a webinar about Michelangelo’s women in the Sistine Chapel. But nothing beats coming face-to-face with six giant abstract canvases, as I did at the Gagosian on Feb. 23.

The space alone lifted my spirits – a large white room the size of a barn, with a soaring ceiling of open rafters, and one long wall of frosted windows admitting a gentle light.

And the paintings themselves were such a surprise. Printed in the Los Angeles Times review, one of the exhibit’s more colorful pieces appeared dull and flat, while in person it’s brushed with lime green. Even the high-quality presentation on the gallery’s website could not do justice to the rich colors, topography of layered paints and grooves, and reflective surfaces that a viewer could only realize in the room itself. These paintings actually surged with action – wide swaths and narrow lines moved up, down, and across an inexact grid.

Mr. Richter based this series, the “Cage” paintings (2006), on John Cage, born in Los Angeles and an influential, avant-garde composer and philosopher of the 20th century. But for the viewer, art is subjective. I love to hike, and what I saw and felt was nature everywhere. Each painting was like going for a walk, or flying over or through a landscape. The predominant green of “Cage 1” appeared to me like a bed of beautiful, soft moss. I wanted to jump into the canvas and lie down in it. Fiery red exploded like a volcano in “Cage 4,” and a silvery section in “Cage 3” beckoned me to swim, as I would in a freshwater lake.

Part of the wonder of going to an art exhibition is also learning about the artist. It was the headline on the review that made me realize I knew some of Mr. Richter’s work, even if I could not recall his name on my own. He is “the squeegee” artist (and much more than that).

Wanting to learn more, I emailed a cousin in London who has worked professionally in the art world for years. He shared a story of visiting Mr. Richter once in his art studio near Cologne, Germany. The artist showed how he created his largest abstract works, often starting with a farbfeld – one of his grids of different colors – which he then scrapes with an enormous, window-scraper type of tool. My cousin described Mr. Richter, who is nearing 90, as profoundly skilled, authoritative yet kind, with very little ego.

I responded to all of this at the exhibition, announcing aloud several times, “I love these. I just love these!” to no one else but my husband. We were all alone in this glorious space. During the pandemic, the gallery has followed county capacity limits by setting up an appointment system, which allows private viewings – initially to a selective group. It’s been averaging about 30 visitors a day.

On March 2, Gagosian opens to the public, still by appointment, so more people can experience the release from all things pandemic, politics, or whatever else may be weighing them down. May the museums soon follow.