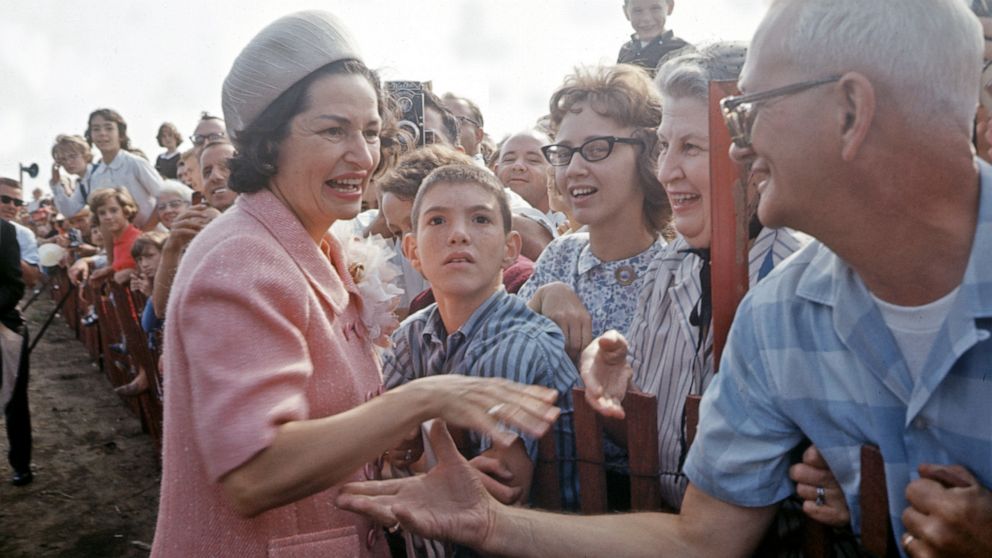 I have to admit — if you had asked me 10 years ago if I could see myself spending more than five years writing about Lady Bird Johnson, and another five months producing a podcast about her, I would have thought I was the wrong woman for the job.

First ladies? Not my thing. I’m a foreign policy person. But after 15 years sitting around conference tables in Washington talking about global conflict, nuclear strategy or trade policy with mostly all-male colleagues, and, with some exceptions, mostly all-male bosses and role models, something started to bother me: It was the way the experiences of the people asking the questions by definition shapes those questions, and often the answers.

I needed to take a look at the topic of women and power and the questions that are asked and answered in telling stories, writing about and making history.

I’m sort of an archive geek, so when I heard that Lady Bird had recorded her own White House tapes, the idea of getting to know her and her story didn’t sound so far-fetched. Once I listened to her often riveting, unique and surprising diary accounts — accounts of some of the most iconic moments in our country’s history — I began to see that all of the volumes of history and journalism written about the 1960s — Lyndon Johnson, Vietnam, Civil Rights, and the Great Society — suffer from a pretty big gap without her voice, without an idea of her influence. And yes, of her power.

Lady Bird Johnson isn’t exactly an obscure figure in the life of the nation. If I asked, say, a few hundred people anywhere over 25 or 30 years old, it’s a good bet they’d know a few things. She’s a president’s wife. She’s a first lady — with never a hair out of place on her petite frame. She came into office in the wake of the JFK assassination. She’s from Texas. Some might remember she had a thing for wildflowers and planting them along highways. If they’ve read any of the LBJ histories, they might remember that she used her inheritance to finance Lyndon’s first congressional campaign. And to purchase an Austin radio station that she probably had a big hand in growing into a very successful media company.

But what I am certain no one knows is that she was arguably the most influential member of the Johnson administration. That her thing about flowers was really a cover for a pretty radical environmentalism. Sure, beautifying highways mattered, but when she was in office, her real focus was on what we now call “environmental justice,” especially in American cities and on bringing democratic access to nature to people of color especially.

Although she never once called herself a feminist, in the doing, her values aligned squarely with the more outspoken feminists of the time.

That she understood early on that the Vietnam War might well destroy her husband’s presidency.

That she was a keen political strategist — I think the one Lyndon Johnson trusted and confided in most.

And that although she took personal risks to campaign in the south for civil rights, she couldn’t quite figure out what to make of Black protests in American cities or dissent against the war. And that throughout it all, she was a journalist and historian in her own right, as her tapes clearly demonstrate.

Now that I’ve spent more than five years learning her story and telling it for you here and in my book “Lady Bird Johnson: Hiding in Plain Sight,” I also see how the tendency to look at the infidelity piece of the Johnson marriage winds up demeaning her and stripping her of substance.

That marriage between the two LBJs? It was a political partnership and a powerful one at that. Thanks to her tapes, Lady Bird brings alive aspects of American politics that are highly relevant today: Race, political polarization, inequality and how Americans use their power abroad, often at our own peril. The fraying of the social contract the Johnsons were so vital in knitting together 50 years ago.

And it made me think: How many other women are “in plain sight,” women in powerful positions and many more unseen women whose stories likewise make up the fabric of who we are and who we will become as a society. Right before our eyes. We just have to look. And listen.

One night, sitting in her private office in the White House family quarters, and reflecting on one of those shallow, glowing books about her written at the time, Lady Bird sighed and recorded, “Sometime, somewhere, I hope someone will write one with more depth about Lyndon and me.”

It was the night before I was born.

Ep. 1: Fourteen Days
In her first-ever diary entry, recorded eight days after President John F. Kennedy Jr. is assassinated, Lady Bird presents a dramatic, cinematically detailed moment-by-moment account of those terrible hours in Dallas, and the days that follow. The episode tracks the 14 days from the murder of the president to when the Johnsons move into the White House, days filled with tragic ceremony and heartfelt moments of solidarity between Jackie Kennedy and Lady Bird. We hear about the decade-long relationship between the two of them, one that dates back to the Kennedy’s arrival in Washington in the mid-50s, and hear fascinating observations these women make about each other

Ep. 2: Thank You, Mrs. Vice President
There are moments in Lady Bird’s audio diaries that truly re-write the known history of LBJ’s presidency. This episode includes one of the most consequential. In a memo to Lyndon just five months into his presidency, Lady Bird predicts how the Vietnam war will derail his administration, and proposes a clear end-date for his time in office — fully four years before he shocked the nation with his announcement in March of 1968 that he wouldn’t run for reelection. We hear Lady Bird’s growing sense that Bobby Kennedy will become LBJ’s political rival, and RFK’s bring-down-the-house performance at the Democratic Convention in the summer of 1964. In the run up to the ’64 election, Lady Bird makes a Whistle Stop tour of the South — her home turf — to try to keep Southern Democrats from defecting over Civil Rights. But she’s met with open hostility, and worse. And on her return to Washington, a sex scandal involving Lyndon’s closest aide presents an October surprise that could easily upend the election.

Julia Sweig is an award-winning author, scholar and entrepreneur. Sweig’s writing has appeared in the New York Times, the Atlantic, the Washington Post, Foreign Affairs, the Nation, the National Interest and in Brazil’s Folha de São Paulo. She is a senior research fellow at the LBJ School of Public Affairs at the University of Texas-Austin and the creator, host and executive producer of the podcast “ In Plain Sight.” Her fourth book, Lady Bird Johnson: Hiding in Plain Sight comes out March 16, 2021 from Random House.

Drawn from over 123 hours of the former first lady’s mostly unheard daily audio diaries, the podcast presents a surprising and original portrait of Claudia Alta “Lady Bird” Johnson, told in her own words. The first two episodes of the eight-part series will debut on Monday, March 1.