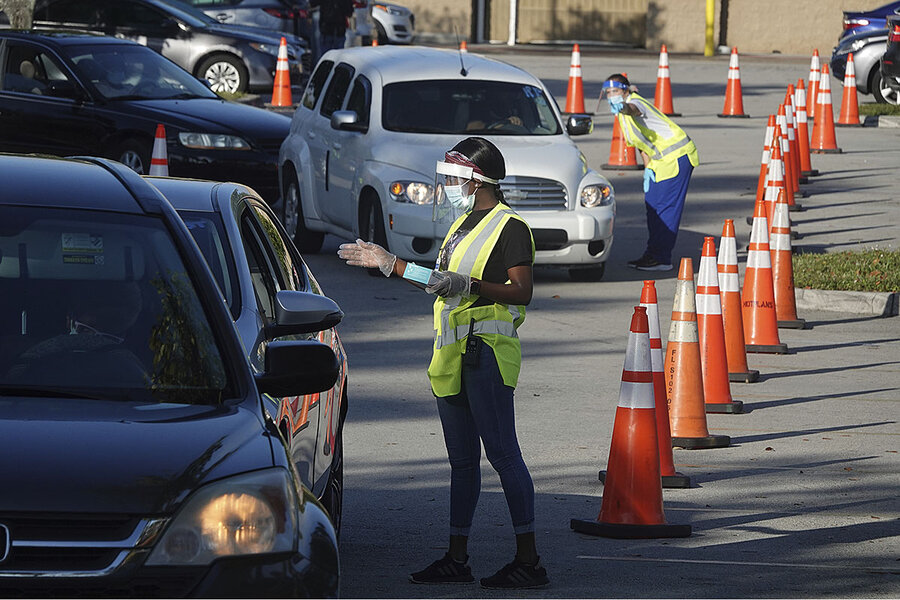 California has an online system of access codes to make sure that shots are distributed equally across different demographics. In Massachusetts, a multitiered priority list and inconsistent guidance has sown confusion and a political backlash. In Tennessee, the county that encompasses Memphis recently ruined thousands of shots after changing state protocols to favor local teachers.

In many states, the rollout of COVID-19 vaccines has faced multiple head winds in terms of supply and demand. Some blame political and social agendas that dictate who should go first.

Here in Florida, the message is simpler: If you’re 65 or older, step right up.

In church basements, pop-up clinics, and grocery stores, state programs are prioritizing a vulnerable age group that, not coincidentally, is overrepresented in the Sunshine State, a political battleground. Frontline health workers and nursing home staff were also eligible in the first phase.

Florida is one of only two states – the other is West Virginia – that chose not to give its first shots to teachers, police, and firefighters. It’s a throw-it-to-the-wind response that seems to be working, compared with other similar large states: Florida ranks in the middle of the pack in per capita vaccinations. More than 3 million residents here have received at least one dose.

Its vaccination strategy, coupled with its drive to reopen for business and education, could yet be undone by various unknowns. And political leaders also face accusations of steering more vaccines to wealthier white communities than to minority residents; a recent pop-up vaccination hub in wealthy Manatee County, near Sarasota, was lambasted as a favor to political donors.

Yet Florida’s less-prescriptive approach to distribution appears to have had some success. At a time when states are all trying to apply their values, complex distribution schemes such as those in California and Massachusetts speak to a desire to act ethically. But Florida is showing that simpler can sometimes be better – or at least faster.

In West Virginia, health officials made it a matter of service and duty for many frontline workers to forgo their shots so the state’s oldest residents could go first, particularly when doses were limited.

“Einstein said genius is taking the complex and making it simple, which also makes it easy to make the simple complex,” says Dr. Clay Marsh, the state’s COVID-19 czar. “For us, it wasn’t about a thousand things. It was about one thing: saving lives.”

At times, West Virginia’s vaccination rate has led the nation. Lately it has also seen a sharp drop in COVID-19 caseloads, something which Dr. Marsh, vice president for health sciences at West Virginia University, credits to the vaccine rollout.

“I understand that each state has a unique strategy,” says Dr. Marsh. “But our strategy – to call on our better angels and a sense of service to prioritize this group of highly vulnerable people over themselves – has given us a special sense of pride.”

Overall, states with smaller rural populations have vaccinated residents relatively quickly. One state that recently surpassed West Virginia in per capita vaccinations is Alaska, where dog sleds have helped cover a vast territory. Another factor appears to be that states with effective vaccination programs set simple rules and adjusted them as they went along. “States are trying to be agile, flexible, and learn and not be afraid to implement and measure rapidly. We are learning to fail fast and fail forward,” says Dr. Marsh.

Florida’s pandemic response has not always gotten good press. Indeed, its lax approach to vacationers was blamed last spring for seeding COVID-19 outbreaks across the country during the first wave.

Decisions to reopen beaches this year and host spectators at the Super Bowl in Tampa were also criticized, but were framed here by many as counterintuitive successes, built on an understanding that government works best when it reflects communal touchstones.

“This is a free state,” Florida Gov. Ron DeSantis said recently, after launching a critique of “lockdowner” states. He has also hailed his decision to keep schools open, pointing to low infection rates among students in Florida compared with other states. Those comparisons appear to be flawed: Governor DeSantis, a Republican and staunch ally of former President Donald Trump, reportedly omitted data on students ages 15-18, unlike other states, making Florida look better than it is.

That said, spread-out housing and living arrangements and a warm climate are all X factors that may have contributed to Florida’s ability to weather the pandemic while keeping its economy more or less on track.

“Florida is its own special mess,” says Diane Roberts, a professor of English at Florida State University and longtime observer of its politics. “But it’s real interesting. DeSantis is carrying on as if this [relative success] is his doing, and some of it might well be.”

“What’s political about that?”

As he readies to make his annual pilgrimage back home to Michigan’s Upper Peninsula, snowbird retiree Larry Smith is concerned that politics has played into Florida’s vaccine strategy. He had hoped to get vaccinated here, but complaints about “vaccine tourism” led to a tightening of rules to exclude nonresidents.

Now Mr. Smith has to wait until at least April, when he returns to Michigan, a delay that he sees as another example of politics hampering the effort.

If the goal is saving people’s lives, he says, “What’s political about that?”

For Mr. DeSantis, the relative success of Florida’s vaccine rollout certainly packs a political punch, and he is not shy about calling out critics or feeding red meat to his conservative base. In doing so, the governor has tapped into what makes Florida, well, Florida, says veteran GOP pollster Whit Ayres, who has worked with Mr. DeSantis on COVID-19 messaging.

“Every good governor tries to lift up the values of their state,” says Mr. Ayres. “And in fact, the ones who have been most successful [addressing COVID-19] seem to be the ones doing so within the values that dominate their state.”

In the case of West Virginia, the state opted not to work with national pharmacy chains, instead going direct to independent pharmacies whose local networks were able to find and vaccinate the most vulnerable residents. It also staffed its own telephone hotline and chose not to outsource online booking of appointments.

To West Virginians like Dr. Marsh, this approach reflects a culture of self-reliance, service orientation, and being “scrappy.”

Police and teachers get their turn

Until this week Florida was one of only four states that, after deciding who goes first, hadn’t begun vaccinating other designated groups, such as teachers and police officers.

“It would be nice to have some idea of who the priority populations are going to be … because people want to know where they stand, where they are in line,” says University of Florida epidemiologist Cindy Prins, who has volunteered at several smaller sites.

She points out that while vaccinating older Florida residents is effective in saving lives, infection rates are generally much higher among younger people who are lowest on the priority list. As a result, “we may not see a full effect [on community immunity] until we can get into 20-somethings and even teenagers and get those people vaccinated,” she says.

The federal government is opening four mass vaccination sites in Florida, including one here at Gateway Mall, a past-its-prime retail plaza on Jacksonville’s primarily Black north side. And starting on Wednesday, police, firefighters, and teachers ages 50 and up will be eligible for appointments at the mass sites.

For Danny Gooden, a Jacksonville retiree who just got vaccinated, culture and values are fine, but what he sees lacking is better communication to Black residents about the efficacy and necessity of the shot. Given past testing of controversial therapies on Black people, many are wary of vaccination. Vaccine hesitancy is highest among Black Americans under 40, according to national survey data.

“This shouldn’t be about individuals, or who is who,” says Mr. Gooden. “It should be about all of us.”