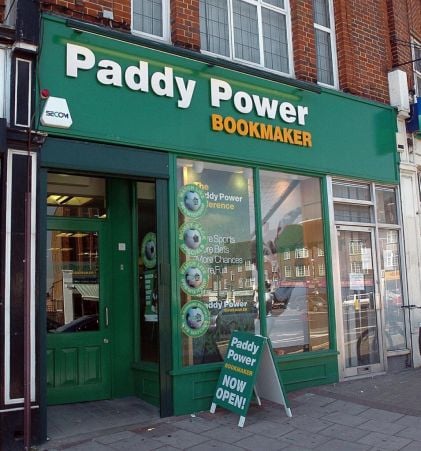 The owner of Paddy Power revealed the Covid-19 restrictions which forced its high street bookie branches to close is costing the business an estimated €10 million-a-month in lost underlying pre-tax profits for each month lockdowns in Ireland and Britain remain in place.

However, parent company Flutter added that overall it benefited from strong sales in 2020 as lockdowns and restrictions saw bored casual gamblers turn to online casinos in huge numbers, growing global customer numbers by 19 per cent.

The firm’s Paddy Power and Sky Betting and Gaming saw average monthly customers grow 36 per cent and 12 per cent in the second half of 2020 and around 40 per cent of high street betters used one of the company’s online businesses to gamble on, despite Flutter owning just 5 per cent of betting shops in Britain.

Chief executive Peter Jackson suggested the shift to online could be permanent and, whilst high street bookies will remain, there could be fewer.

Speaking to reporters following publication of the company’s results, he said: “I think there’s definitely going to be a change in people’s shopping habits as a result of this pandemic and I think we’ve seen a real acceleration towards online away from retail.

“But I don’t believe that retail is dead, I think that we are ultimately pack creatures, we enjoy each other’s company, then I think we will see people returning back to retail shops, though I suspect there will be less of them in the future than there are today.”

Globally, total sales soared 106 per cent to £4.4 billion (€5 billion) in 2020, although pre-tax profits fell from £136 million to just £1 million due to costs associated with its $12.3 billion (€10.2 billion) merger with Canadian rival Stars Group, creating the biggest betting company in the world by revenue.

Flutter bosses added that they welcome new rules being implemented by the Gambling Commission that will see online slot machine operators limiting the speed of the games, stop using sounds and images suggesting a “win” when the user has lost, and end the use of auto-play settings.

But the company warned a proposed 5.3 per cent turnover tax on online poker and slots being introduced in Germany from July 1st would make the country’s online gaming market commercially unviable.

Even with mitigation measures, it would cost Flutter between £15 million and £25 million in the year, the company said.

Online gambling and gaming grew strongly in 2020, particularly in the final three months of 2020 when peaks of Covid-19 grew globally.

Flutter explained it had 7.6 million monthly online players, with particularly strong growth in the US, where gross gaming revenues hit $1.1 billion.

Bosses said they will continue eyeing up future acquisitions and takeovers, believing online gambling has more growth to come.

The company said: “Ultimately, we believe that the online gaming sector is similar to other large digital markets, whereby the largest player achieves superior economics through operational leverage, creating a virtuous circle for future investment in product, marketing and generosity which in turn drives further growth.”